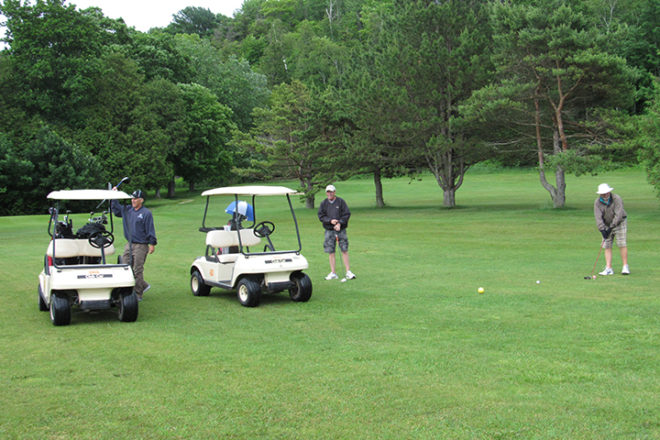 (From left) On a recent rainy weekend, Paul Gorski, Pete Hickey and Jim Berg chose the front tee at the Alpine in Egg Harbor for two reasons: They wanted to have fun and a lot of birdie putts, and the conditions would have made scoring from the back tees quite difficult. Photo by Craig Clayton.

The Tee It Forward campaign is starting to catch on.

Jack Nicklaus, now undisputed greatest golfer of all time, spearheaded the push as he saw weekend golfers or aging golfers struggling as they played the back tees or standard men’s tees.

A problem was, until recently, a lot of courses provided only championship, men’s and women’s tees, and even 70-year-olds who could no longer drive farther than 190 yards were not going to be caught dead playing the women’s tees. So, they had little chance of ever putting for birdie, and they’d stop enjoying the game.

Alpine Golf Course and Cherry Hills are just two of the area courses that have found a solution, and have seen an increase in people playing the correct tees for the length of their drives.

“We finally ran out of scorecards, so when we went to print more, we decided to change the women’s tees to ‘forward’ and the men’s to ‘back,’” said Pete Hickey, Alpine course employee and golf enthusiast.

Hickey, 65, until last year mostly played the back tee, but was having a lot of trouble on some of the 440- and 450-yard par-four holes. His average drives weren’t going as far as they did, so he’d over-swing. Harder swings result in more sidespin, more misses, more mistakes, more errors and more misery.

When he chooses the front tees, Hickey has found himself swinging easier and is seeing results. And instead of pulling out the shortest possible iron and swinging hard on approach shots, he has been choosing the iron that he can swing smoothly and easily to put the ball near the pin.

That can be true, said Matt Stottern, PGA professional and instructor at Peninsula State Park.

Stottern said Nicklaus himself used to make playing from the women’s tees part of his routine on the week of the U.S. Open. The all-time tour leader in wins and major victories played the women’s tees on those usually-narrow and difficult U.S. Open tracks so he could get a feel for scoring low and having a lot of birdie putts, Stottern said.

How often does Stottern emphasize the importance of playing the correct tees?

“Every day,” Stottern said on a recent evening before heading out for a practice round for the Wisconsin State Open. “Every day that’s something we talk about, especially up here — I work with a lot of older people.”

But every day, Stottern sees people tee it up from either the men’s or championship tees when those players are clearly going to be in over their heads.

During a recent interview, Hickey looked out the window from the clubhouse desk and said he was watching a group of duffers top their drives and hit slow rollers on the first tee of the red nine.

“Beginners and the seldom golfers, I watch them walk up to the tee on the first, and they’re playing the back tees,” Hickey said. “They want to get their money’s worth. I can understand that. But why not enjoy the game, make yourself feel like you’re on the pro tour?”

The league at Alpine this year dictated that everybody play from the same tee, which has turned the Tuesday evening nine-hole events into more casual competitions where the short game is at a premium. The few long hitters in the outing find themselves closer to the greens and often are out of practice and not as skilled as the front-tee players on shots from 70 yards and in.

Some old-fashioned, traditional courses still only have men’s and women’s tees, with short, quirky par-4s often followed up by PGA Tour-length par-4s where even long-hitting amateurs have trouble reaching the green in two. Extra sets of tees can make the game fair for older players competing with younger ones and can speed up the pace of play.

“The seniors love it. They have a separate tee,” Martell said. “Obviously (for men) there’s kind of a stigma that goes with the ladies tee.

“I added the tee as a middle ground between the regular tee and the forward tee.”

Martell said he does not play the forward tees often. He said he hits fairly long drives and that can actually bring more hazards into play or can deter him from hitting driver or 3-wood on holes that have doglegs in the fairways.

It also can force bigger hitters to hit short touch shots from within 50 yards of the green or can force them to lay back to a distance where they can take a full approach shot.

Stottern said when he goes along with clients for a playing lesson, he plays whatever tee they’re playing. He’ll either try to hit his tee shot at a distance where he wants to practice an approach shot, or he’ll hit driver to practice hitting a green or target that suddenly came within range. When Stottern’s giving a lesson, he’s not focused on himself. He still would want to hit good shots to show the client.

“It’s more about the student then,” he said.

Stottern and Hickey know it’s fun to move up and card a low score.

And Nicklaus has been preaching that too.

“I don’t know about you,” Nicklaus says in a video promoted by the United States Golf Association. “When I go play golf, I want to have fun.”

And knowing Jack, luring some young hotshots to the front tee and giving them a good thrashing would be a lot of fun for him.