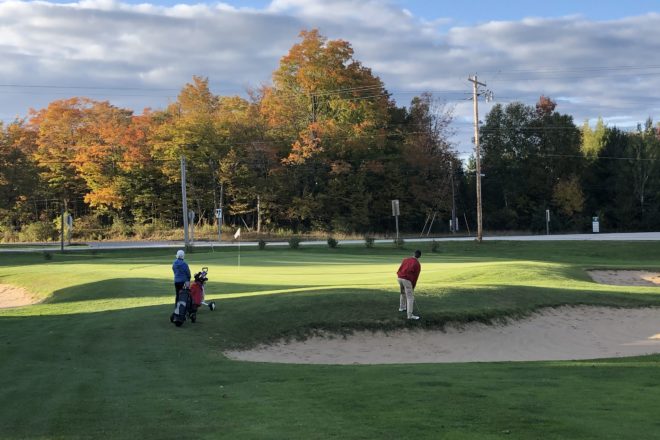 When governors ordered golf courses and driving ranges closed in April, golfers worried that their favorite links might fold or that they might not get to tee up at all in 2020.

Six months later, course owners and managers have witnessed the season move from uncertain to spectacular, with both new and returning golfers keeping tee times full.

“We didn’t know what to expect,” said Jason Daubner, general manager of Peninsula State Park Golf Course. “In this day and age, with COVID and people being laid off of work, I didn’t know if golf was going to be affected. If people didn’t have money to put food on the table, would they have money to come out and play a round of golf? The season is so opposite of what I had been thinking.”

Course managers and pros say the golf business has been a bright spot throughout Door County and beyond. Rounds played nationwide in August surged by a record 20 percent over August 2019, breaking an improvement record (19.7 percent) set in July 2020, according to the National Golf Foundation, which tracks the health and vitality of the golf industry.

Parking lots at Door County courses such as Maxwelton Braes and Peninsula State Park have been full almost every rain-free day, even though both have been enforcing extremely strict rules to prevent large gatherings and to keep strangers socially distanced. Maxwelton Braes’ managers took precautions an extra step in not making singles and twosomes into foursomes if they did not normally play together or didn’t arrive in the same car.

Despite those limitations, Jim Bresnahan, owner of the Maxwelton Braes links south of Baileys Harbor, saw an increase in rounds played during the summer months.

He’s talked to course owners as far away as Louisiana, and they’re seeing similar trends: more golfers each day, but perhaps less clubhouse revenue. This is largely because of extra safety precautions, such as expanding tee-time intervals from 10 minutes to 12 minutes. The Maxwelton Braes staff also limits the number of people in the clubhouse to three individuals and keeps people socially distanced to limit exposure.

Local courses have all found ways to operate safely during the pandemic. Some have attached a golf ball lift mechanism to pins to prevent golfers from putting their hand in the cup to retrieve a ball. Others have required golfers to leave the flagstick in the hole when putting. Additional safety precautions have included sanitizing rental carts after each use and removing ball washers and bunker rakes.

Jack Jackson, managing partner of The Orchards Golf Course near Egg Harbor, saw a better turnout of golfers this summer than he had anticipated in May. He also saw a decline in sales of golf apparel, but he canceled the bulk of his orders when the pandemic hit.

“We’ve pretty much sold what we had,” Jackson said.

“The mandatory shutdown was nerve-wracking,” Hansen said, looking back at the lost April. “By the time they lifted restrictions, we’d maybe lost a couple weeks. If it would have gone through the end of May, it would have been a different story.”

As it turned out, Hansen reported an increase of 15-16 percent in rounds played.

Tom Schmelzer, designer and owner of 27 Pines, a par-3 course and practice facility south of Sturgeon Bay, said he had been “very worried” about the lost April and the iffy May weather. But June, July and August more than picked up the slack. He noticed many people returning to golf after years of absence, as well as young athletes showing up to play this year, which he finds encouraging.

Cherry Hills’ Jon Martell opened the course for the season on Memorial Day weekend and saw a steady increase in rounds played, especially by novices and people who had not played for many years. Good weather on weekends helped, as well as the realization that golf provides recreation and socializing while also observing social-distancing recommendations, Martell said.

“I don’t think people will stop playing when things are back to normal,” Martell said.

“For a year when we weren’t sure we were going to open,” Trudy said, “it wound up being a good year.”

Because the Peninsula State Park Golf Course’s clubhouse is located within a state park, it has had to remain closed to the public all season. The no-entry policy held down sales of sandwiches and golf equipment, but clubhouse staff came up with creative ways to generate revenue with window displays and a bar-and-grill window.

“Our staff has gone above the call of duty to get the job done,” Daubner said. “I’ve been very lucky and very blessed to have the situation that we’ve had here, based on tough times.”

After downward trends in rounds played nationwide from roughly 2008 to 2018, Daubner finds this year especially encouraging. In addition to seeing more players on the 18-hole course, business picked up on the six-hole short course and at the practice facility as well.

“I just hope this year has introduced a lot of people to the game of golf,” Daubner said. “Hopefully, it’s something that will stick, and it will continue.”