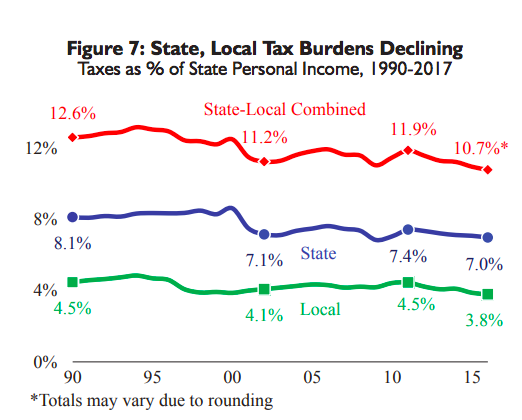 On Nov. 6, voters will select Wisconsin’s governor, all 99 members of the state Assembly, and 17 of the 33 members of the state Senate. When they take office in January, they will face pressing issues ranging from a looming worker shortage to pressures on state, local and school finances. Drawing on our recent research, we provide a guide to these topics to help voters make informed decisions.

To help voters sort through the noise, we have identified 10 questions that candidates should be addressing regarding six key issues facing the state:  transportation, economy and workforce, education, state-local relations, taxes, and Wisconsin’s fiscal health.

These questions emanate from recent research conducted by the Wisconsin Policy Forum on these topics.

Wisconsin has traditionally been considered a high-tax state. In recent years, however, the state and local per capita tax burden has declined from 11.6 percent of personal income in 2008 to 10.7 percent in 2017. (See Figure 7.)

This has largely been due to a growth in personal income following the Great Recession, as well as a decline in unemployment compensation tax collections and the impact of property tax levy limits that first took effect in 2005. Since that year, local tax collections have increased 28.5 percent, down from 65.9 percent in the 12 years prior.

By comparison, state tax collections have increased 37.2 percent since 2005, compared to 66.2 percent in the 12 years before.

Some observers argue that the current tax structure used to finance state government relies too heavily on the income tax; while others argue that local governments are too reliant on the property tax and would benefit from a broader array of revenue options to fund their operations.

Wisconsin’s reliance on specific tax sources to fund particular levels of government has been the subject of debate for years. Many government finance experts say four qualities are important in defining a high-quality revenue system, namely:

Reliability:  The system should generate roughly the same revenue growth from year to year.

Balance:  The system should rely on a variety of revenue sources generated by different types of taxpayers, such as property owners, consumers, wage earners and investors.

Simplicity:  The system should be relatively easy to administer, without requiring an inordinate amount of staff time or resources, and should not place a significant burden on taxpayers to comply.

Equity:  The system should impose similar burdens on taxpayers in similar circumstances.

In general, Wisconsin’s state and local tax structure tends to rate low on reliability, with income and sales tax revenues subject to economic fluctuations. It also generally rates low on balance, because the state reserves certain taxes for itself and other taxes for local governments. Some taxes, such as the sales tax and local wheel taxes, tend to be simpler to administer than either the income or property tax, while others, such as the property tax and income tax, tend to rate higher for equity.

9) Given the state’s advances in lowering its overall tax burden, do you think additional progress needs to be made in this area, and, if so, how would you achieve it? Would you support changes in the state’s current tax structure to promote greater balance and equity or other goals?