K-12 education is the single largest expense for taxpayers at both the state and local level in Wisconsin. Funding for schools comes from three main sources – state aids, local property taxes, and a small share from federal aids. The state provides two major types of aids: general aids, which are unrestricted and are distributed using a complex formula intended to equalize differences between property tax-rich and -poor districts; and categorical aids, which are typically targeted for specific purposes, such as assistance for students with disabilities.

Figure 4 shows how state funding for K-12 education declined and then rose again between 2010-11 and 2018-19. Total spending for all school aids rose by $570 million, or 10.6 percent during the period, roughly the rate of inflation. 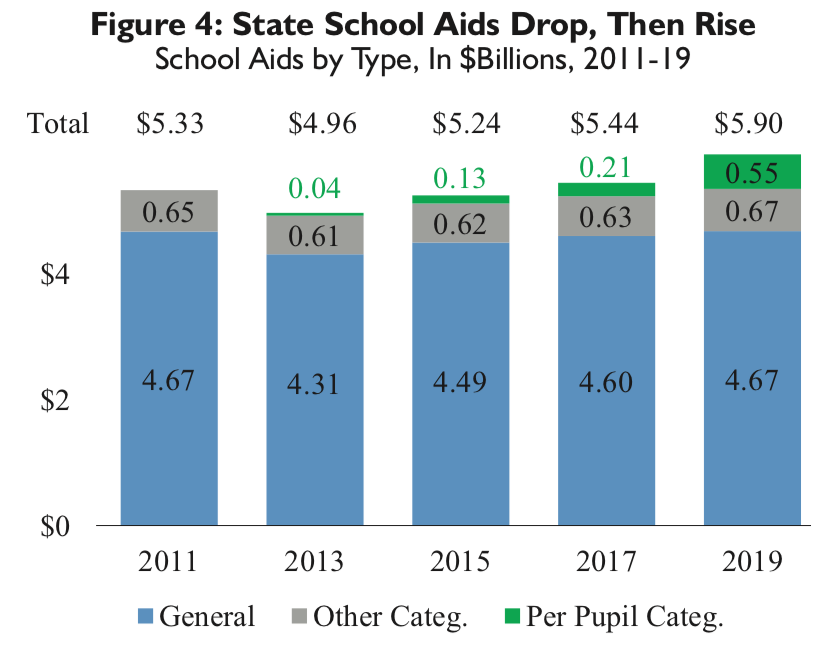 Additionally, at the end of the legislative session this year, the governor and lawmakers provided $6.5 million more in categorical aids for sparsely-populated school districts in 2018-19 and an additional $15.6 million in revenue limit authority for low-revenue districts.

In recent years, general school aids have fluctuated. They declined from $4.7 billion in 2006-07 to $4.3 billion in 2012-13 and have risen slowly every year since. Categorical aids have undergone more changes. In the 2011-13 budget, the state established and expanded a new form of categorical aids known as per pupil categorical aids. Like general aids, per pupil aids can be used for any purpose, but they are distributed on a flat per student basis outside the general equalization aids formula and the revenue limits described below. That means they do not account for the property tax base in a district or other factors that measure residents’ ability to pay for schools. These aids have risen from about $40 million in 2012-2013 to $549 million in 2018-19.

A controversial element of K-12 education finance is revenue limits, which essentially restrict how much schools may raise property taxes from one year to the next. Revenue limits are predicated on a district’s combination of state general aids and property taxes and are established on a per pupil basis.

The state largely has frozen per pupil revenue limits since 2015; schools may exceed the limits if voters approve a local referendum, which they have done in a growing number of school districts.

Critics complain that the revenue limits penalize fiscally responsible districts that were spending at relatively low levels when revenue limits were imposed in 1993-94, locking them into low-spending levels ever since. Critics also say revenue limits harm districts with higher per-pupil costs due to declining enrollments. A blue-ribbon legislative panel led by Rep. Joel Kitchens and Sen. Luther Olsen is examining the school finance system and is expected to make recommendations later this year.

As shown in Figure 5, tuition comprises a growing share of UW System revenues. In the late 2000s, tuition was increased to offset state funding cuts. Since 2013, the state has frozen tuition for in-state undergraduates. 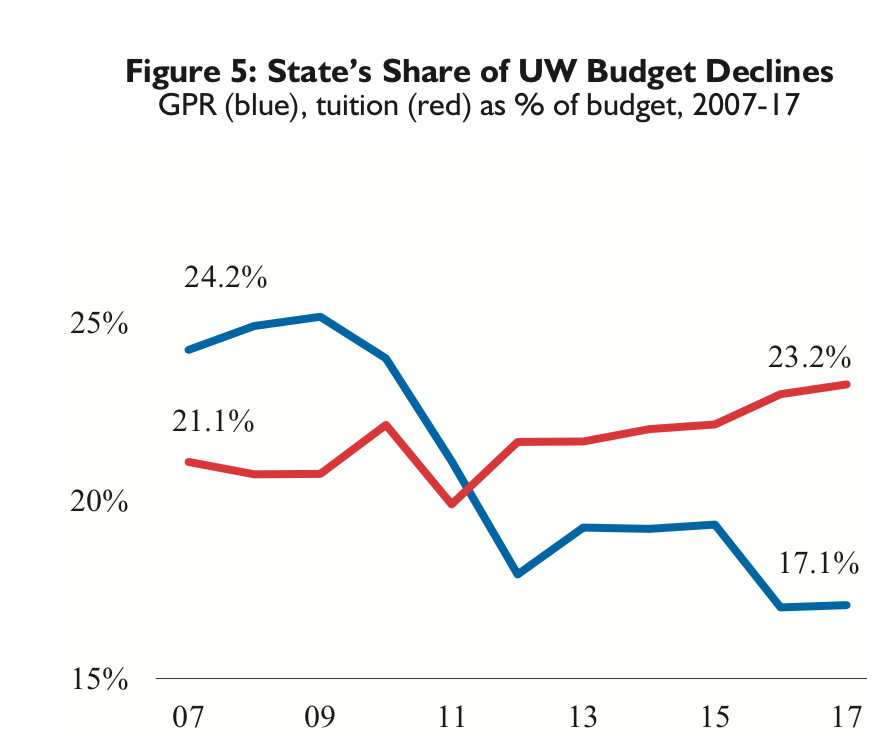 Gov. Walker has said he intends to continue the freeze for another four years; Democratic candidate Tony Evers has indicated he supports a freeze, but not for how long.

6) Should state funding for the UW System budget increase and, if so, by how much? Where should this additional funding come from?