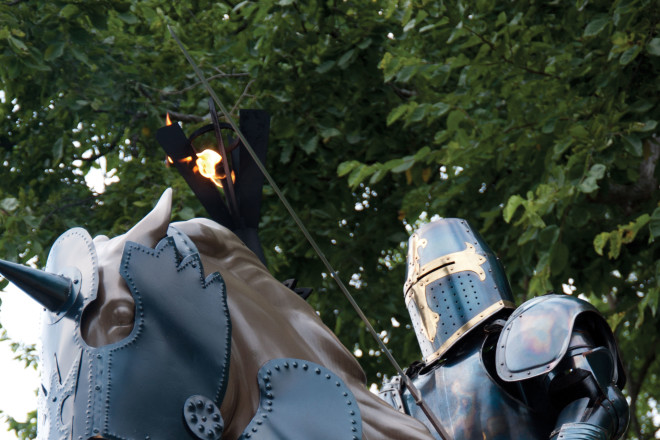 The English Inn is an indelible piece of the Fish Creek story. Devoted patrons have been coming to the restaurant for decades, back to the days when it was the original Parkway (commonly referred to as “The Diaper Inn,” since it was an 18-year-old bar and just about anyone could get in). 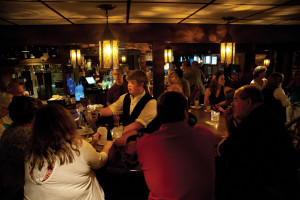 The building, which is estimated to be nearly 100 years old, began as a woodworking shop before becoming the Parkway. Pete and Dort (Dorothy) Kortes purchased the bar in November 1964. They gradually, painstakingly and dramatically turned the space into the restaurant of today. They chose a décor that was, in Dort’s words, “elegant and different than anything up here.”

The carefully constructed dining rooms include a huge stone fireplace, numerous stained glass partitions and a spectacular chandelier made of wood and knight’s armor. The atmosphere it creates is part fine dining room, part English pub with little snugs for privacy. It is at once ornate and relaxed, formal and totally comfortable. Whether you are ordering a bottle of Dom Pérignon or an Old Fashioned, the setting works.

In July 2005, the restaurant was purchased by Randy and Lisa Daubner, who previously owned Voight’s Supper Club (now the Mink River Basin Supper Club) in Ellison Bay. Their fan base, so to speak, followed them south to Fish Creek and almost at once The English Inn had the great feel of the old days of the Korteses, complete with Donnie Ray on the keyboards and head chef Eric Stitch in the kitchen. With the basics covered, they began making the restaurant their own and further enhancing the atmosphere.

The first project was the outside patio. Randy explains, “We really wanted to incorporate the garden since everyone loves to be outside in the summer, so we created an outdoor seating area.” Diners can enjoy a drink outside on the front patio while waiting for a table or they can have an after dinner drink. The plush couches and chairs sit around tables that are heated for nights with a little chill in the air. 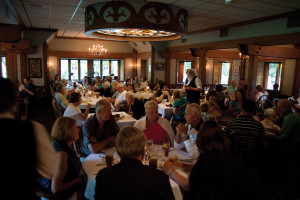 ject, and one that can cause Highway 42 traffic to slow down in front of the restaurant, was the addition of the two mounted knights on either side of the front door, complete with lit torches. The horses themselves were brought in from “Ye Olde” Minnesota, and the knights travelled all the way from England. Randy and Lisa called Cy Turnbladh from Hands On Art Studio to see about creating the armor for the knights to wear. Never one to shy away from an art challenge, especially one without precedent, Cy took the project on. He recruited his wife Karon’s nephew, Austin Ohm, to come up from Madison to help over the winter of 2008. It took over 300 man-hours, extensive research to ensure authenticity and lots of trial and error, but they eventually came up with the right configuration and finishing. Now people travelling have another great spot to stop and take pictures. While posing, a lot of them happen to notice the menu posted outside and end up coming back for dinner.

Apart from the knights, the special entrées are what draw people in night after night – specifically, the Beef Wellington with an Espagnole sauce and the pistachio encrusted halibut with a beurre blanc sauce. The menu’s variety is only surpassed by its consistency. Other favorites include the spinach salad with a hot bacon dressing, baked French onion soup and twice baked potatoes. When diners leave room for dessert, they often choose the crème brulee. 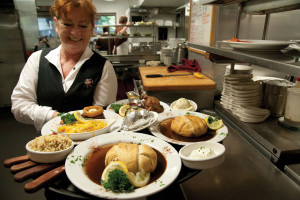 While the choices have remained the same for many years, the way the servers take orders has changed notably. Instead of writing orders down in chicken scratch, the wait staff has mini hand-held computers that take the orders and send them directly to the kitchen. For some customers, it is a surprise and maybe a little too much like The Jetsons, but it only makes the dining experience better for the guests. “We have a lot of people who have theater tickets and time is a concern. All they have to do is tell their server that they have show tickets and with one touch of a button, the kitchen knows that table number eight doesn’t want to linger between courses,” Randy notes. Lisa adds, “We also have customers who want to take their time and the servers can slow the kitchen down if need be.”

For those who missed dinner before a performance, including actors and theater staff, late night dinner and appetizers are offered in the bar after the dining room has closed. Lisa laughs, “Randy will fire the stove up at any time, as long as we are still open.” Being so well cared for is something that customers appreciate.

Another technological tool that the English Inn has incorporated is From Vine to Dine. It is a computer program that can be found on their website as well as on a touch screen computer in the lounge. It makes suggestions about wine pairings with entrées, which is educational for diners and is a helpful way for the servers to get to know the extensive wine list. Some of Randy and Lisa’s staff also accompany them to Napa, California for wine training and tasting, something from which the patrons ultimately benefit. 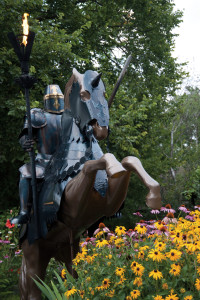 The bar area is the domain of Randy and Lisa’s son, Nick. At 19, he has worked every aspect of the business including waiting tables and working in the kitchen, and he has decided to follow in his parents’ footsteps. “I love talking to the customers at the bar and getting to know them. This is what I was meant to do,” Nick explains. Lisa agrees, saying, “He is just like his dad and has to be here every day.” Nick’s girlfriend, Ashley Logerquist, hostesses with Lisa which is definitely a two-person job most nights. The Daubner’s youngest son, Tommy, works in the kitchen as a fish cook. He plans to eventually go to college for a business degree. The family dynamic is evident to repeat customers. They are greeted by name by Lisa at the door, served their favorite cocktail by Nick and know that Randy is in the back along with Tommy making sure everything is running smoothly.

Countless rehearsal dinners, weddings, and anniversaries have taken place over the years at the restaurant as well as life’s every day celebrations like spending time with family. In 2009, there was a reunion of past employees which was also attended by Dort Kortes. “I have so many wonderful memories of The English Inn. Our customers brought me such joy,” Dort reminisces. It is obvious that Randy and Lisa get this same joy from their customers. As such, we can all look forward to the Daubners tending this treasure with care for some time to come.