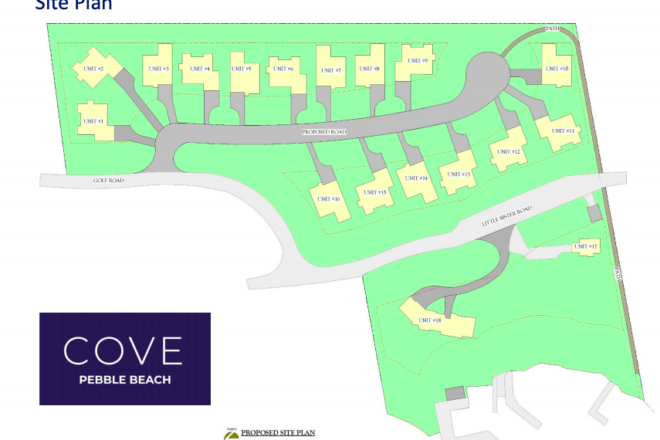 The proposed site plan for The Cove at Pebble Beach.

Lance and Bridget Crane objected Tuesday to the long list of conditions that the Sister Bay Plan Commission placed on their proposed condominium development on the former Little Sister Resort property.

Attorneys Tyler Pluff and Amy Sullivan of Pinkert Law Firm did most of the talking for the Cranes during a tense exchange near the end of a three-hour plan commission meeting April 27.

The Cranes are seeking a Conditional Use Permit to build 18 residential condominiums on the property, most of them on the landward side of Little Sister Road.

The conditions include not using the words “Pebble Beach” in the condo project’s name, constructing an ADA-compliant path to the waterfront, banning transient rentals of the condominiums, and leaving the former Fred & Fuzzy’s restrooms – located near village property – and making them available for public use, with maintenance by the village.

Act 67 significantly weakened the strength of a municipality’s oversight of Conditional Use Permits (CUPs), making it impossible to deny a CUP based solely on testimony in opposition.

According to the act, as long as those seeking the permit can prove they are going to abide by the restrictions set out in the permit, no amount of neighborly opposition can prevent a municipality from approving it. The law was passed as part of a bill dubbed the “Homeowners’ Bill of Rights” in 2017.

Plan Commission Chair Denise Bhirdo appeared surprised by the Cranes’ response. She and Village Administrator Beau Bernhoft said the tone taken by the attorneys was much different from the impression they had gotten during a recent meeting with the Cranes and their attorneys to clarify the conditions.

“This was not an avenue the Cranes raised in our discussion,” Bhirdo said.

Pluff said the Cranes would not discuss the conditions further. In response, Commissioner Nate Bell recommended tabling the issue because the village did not have legal representation at the meeting.

“We have a lot of non-attorneys talking to attorneys at this point, and generally that is not a good thing,” Bell said.

The discussion ended with the Cranes expressing their frustration with the decision to table the issue.

The plan commission continued its review of a proposal by Wild Tomato owner Britt Unkefer for a vacation-rental development behind Skipstone Coffee in the center of the village.

The new three-story design for the five-unit complex came in response to the village’s denial of an earlier two-story concept that did not meet the village’s parking requirements. The new version adds garages on the first floor to provide adequate parking.

The commission spent substantial time debating the color scheme and architectural aspects of the building, ultimately suggesting that the design include dormers and treatments to break up the barn-like structure.

The plan commission approved a bike-rental operation at the Hotel Dörr property presented by Dave Rack. The business would operate out of a kiosk adjacent to the sidewalk, with 12 fat-tire electric bikes available for rent or for tours in and around Sister Bay.