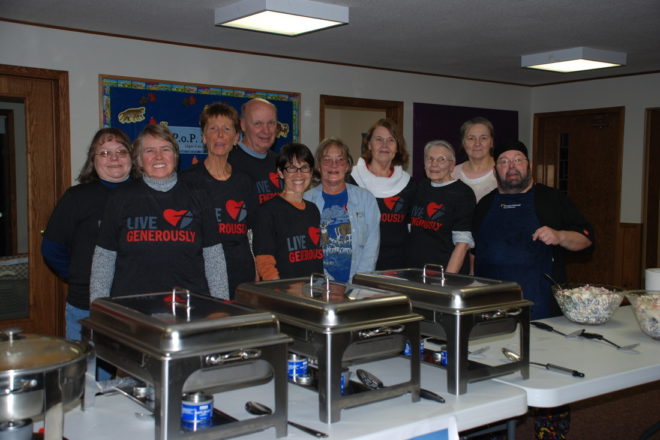 “It needs to be done,” she said. “It’s not a good thing at all that it’s not available. There are elderly people who don’t have family up here and are going to be alone.”

Or, she points out, putting on a full Thanksgiving spread could be beyond someone’s means this year.

But the reason someone wants to attend does not matter.

“It was just a no-brainer as far as we were concerned,” Judy said.

Her “we” refers to one person besides herself – Winnie Jackson, administrative assistant at First Baptist Church.

“Because of our involvement with the food pantry here, we’re aware of the people who don’t have access to Thanksgiving dinner,” Winnie said, referring to the church’s Koinonia Kupboard, a free food pantry run by Winnie’s mother, Mabel Peterson.

“All of a sudden there was nothing up here. We didn’t think that was a good idea,” she said.

The two women met in May, and decided a free community Thanksgiving meal in Northern Door was imperative.

“Sometimes that’s how things happen,” Winnie said. “But it takes somebody willing to do it.”

“We took it to the elder board and that was it,” Judy said.

OK. The idea is one thing. Carrying it out is another. Luckily, Judy and husband Mark Paulson have a history of providing big Thanksgiving meals.

“We knew there was a need. We saw that we were capable of fulfilling this need, and we have a facility just perfect for it,” Judy said. “Mark and I operated the Old Orchard Inn Restaurant from 1988 to ’98. Every year we did Thanksgiving dinner and then would close down after that. We had some families that came every single year that we did it. The help loved doing it and the people loved what we did. So we were used to doing it.”

And, perhaps because of that, after they left the restaurant business, they were asked by the folks who run the Bridges program, an organization created to help with the cultural experience aspect of the J-1 visa program that brings students from around the world to work during the busy season at various operations throughout Door County. Door County businesses rely on these young workers, who depend on Door County to make some real cash.

But those young folk in the J-1 visa program are not indentured servants. The Bridges organization formed to make certain that the young people were getting the cultural aspect of the program that is promised to them. The group arranges outings, has a bike loan program for the students, and organizes events that include food.

That’s where the Paulsons came in. They were dragooned to cook large-scale for Bridge events, including the final gathering in September, where they do a traditional Thanksgiving meal for these young people from around the world who in many cases have no idea about American Thanksgiving traditions.

“That was good practice,” Judy said of the Bridges Thanksgiving meal.

OK. Now they have the space to hold a large-scale Thanksgiving meal and a kitchen to prepare it, but they wondered if they had enough volunteers to pull it off.

“My biggest concern when we agreed to do it is, can we find enough people to pull it off,” Judy said, and that concern was echoed by Winnie.

But there was no need for concern because other churches had also been thinking of the lack of a Thanksgiving meal in Northern Door. 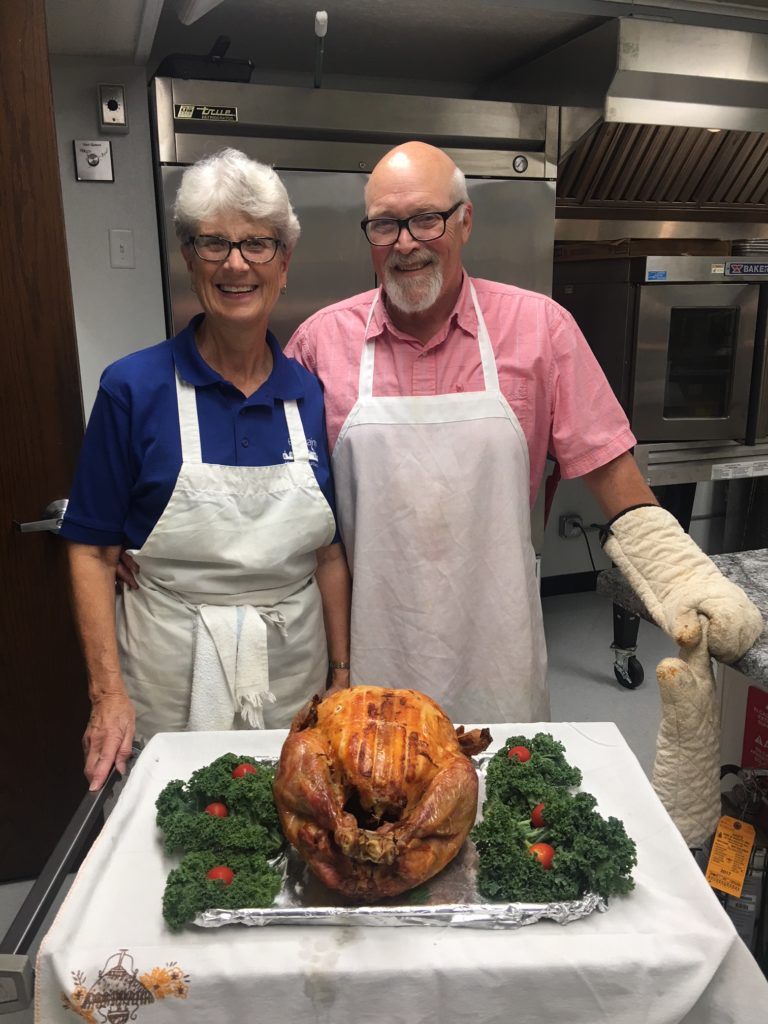 “Shortly after they started talking it over at church, all of a sudden Pastor Mark [Billington] gets a phone call from the people at Prince of Peace Lutheran in Sturgeon Bay, where they feed people, anybody who wants to come, once a week,” Judy said.

Pastor Jamie Gomez of Prince of Peace wanted to know if anyone was doing a free community dinner. Judy talked with him and learned, “They were just like, ‘We want to help you.’ They have a guy, Michael Bien, a retired executive chef, and he loves to do this stuff. He has a heart for it, and the people at that church have a heart for it.”

“Someone had read an article that they hadn’t been doing a community dinner up north,” Michael Bien said. “We do a weekly dinner every Thursday, and we do our Thanksgiving dinner the week before. The Methodist Church here in Sturgeon Bay does a Thanksgiving dinner, and we didn’t want to step on any toes, so we thought maybe we could do a road show.”

Judy and Michael parlayed, and Michael came away from the meeting thinking that “Judy is one of the most organized people I’ve ever met.”

Judy only says that she is “anally organized.”

In addition to Bien and a tested crew from Prince of Peace, Judy said volunteers from Ephraim Moravian Church and St. Luke’s Episcopal also offered help.

“We have a wonderful crew,” she said. “I’m very excited to see how it all works out. We couldn’t have done it all by ourselves.”

She said the cooking duties have been split between the two churches.

Judy loves to bake, and she said the homemade dinner rolls are the same recipe she used at her restaurant. “People would fight over those,” she said.

There will be no carryouts for the meal. Judy said there will be tablecloths, candles and Thanksgiving arrangements.

“We want this to be a really relaxing, upscale, pleasant, cheerful experience for people,” she said. “People, I think, will be very pleased.”