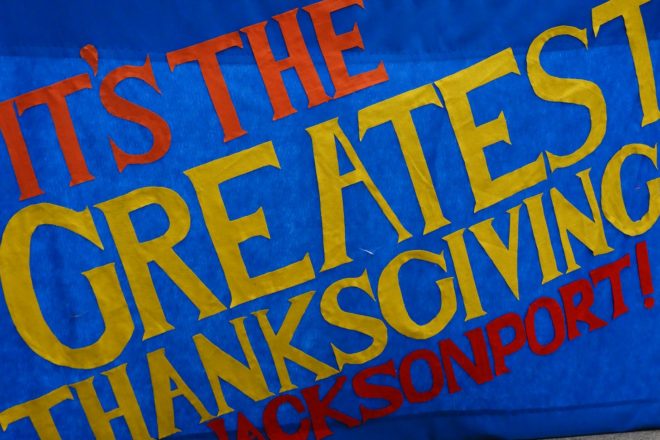 Though the 23rd annual Jacksonport Thanksgiving parade will last only 15 or 20 minutes, the benefits will last much longer. This year, the Sevastopol Student Council and Gibraltar DECA students have organized a raffle to benefit the Door County Secret Santa Project, which pays heating bills for Door County families and individuals in need during the holiday season.

For the past nine years, each school has collaborated on making banners for the parade, running the raffle, organizing volunteers to be in the parade and organizing donations, all while learning valuable lessons about problem solving, collaboration and community service.

“You realize how much work it actually takes and how many small things can add up into something very big and beneficial to everyone,” said Jack Weitman, DECA’s vice president of leadership.

Sevastopol student Abi Schauske said that seeing so many families in a small town like Jacksonport makes her realize how small the parade is, but how everyone really appreciates it being there.

The parade has traditionally focused on benefiting an individual, but this year the committee was unable to find someone in need who was willing to be public about his or her circumstances, said Mary Witteborg, DECA/Student Council adviser and parade committee chair. Instead, the committee chose to focus on an organization that could benefit multiple people.

Families in need of heating-bill assistance are recommended to Secret Santa by friends and neighbors. The organization then helps with heating costs by paying an electric bill or buying a tankful of propane to give the gift of peace of mind.

Jane and Jennifer Lee established Secret Santa in 2011 with donations collected at a Northern Door coffee shop. The effort was inspired by a 2003 movie called Secret Santa, in which a journalist tries to uncover the identity of an individual who anonymously gives presents to community members in need.

The Door County Secret Santa Project has grown to help almost 35 families with their heating bills each year, contributing about $500 to each. The group has helped more than 225 families so far.

“We try not to be the focal point of it,” said Jennifer Lee. “It’s really the community that’s doing it.”

Kelly Nelson, who sells Beautycounter and Norwex merchandise, will donate 25 percent of the commissions that she makes Nov. 8 through the end of the month.

“Beautycounter and Norwex missions are to get safer products into everyone’s hands, to improve the quality of life and to take care of people,” Nelson said, “and I think that aligns with the mission of Door County Secret Santa: to help people, neighbors helping neighbors. We need more of that.”

A majority of Secret Santa’s fundraising is done at Blues on the Bay –  Door County’s summer blues festival – and the Jacksonport parade adds to those efforts.

Though Witteborg and teacher Lindsay de Young help facilitate the project, the students do 95 percent of the work, de Young said.

Students have organized another fundraiser called DECA Cards that offers other prizes. It’s a parade-day card raffle in which someone buys a card out of a deck before the parade, and the card is cut in half. After the parade, the team shuffles the card halves and tapes some to prizes. Those who bought a card can check after the parade to see whether they’ve won a prize.

Most of the work is done during the last hour of the school day, after school and on weekends. DECA students Weitman and Kayla Scharrig, vice president of community service, said they spent a few weekend hours going to businesses in person to sell raffle tickets.

The students don’t communicate with each other directly or meet in person until the day of the parade because of Gibraltar’s no-cell-phone policy. Instead, teachers facilitate the communication, and, Weitman said, parade day is mainly smooth sailing. Scharrig said she also knows a lot of people at Sevastopol, which helps ease the tension.

As they scrolled through pictures of last year’s parade, Scharrig said, “It just feels really nice to be able to benefit someone and see all of your hard work pay off in the end.”

Weitman and Scharrig plan to present this project at a state DECA competition in March.

You can purchase raffle tickets for $5 each or five for $20. Donations for the Door County Secret Santa Project are accepted at any Nicolet Bank branch, at Brew Coffeehouse in Ellison Bay, and at P.O. Box 161, Ellison Bay, WI 54210.