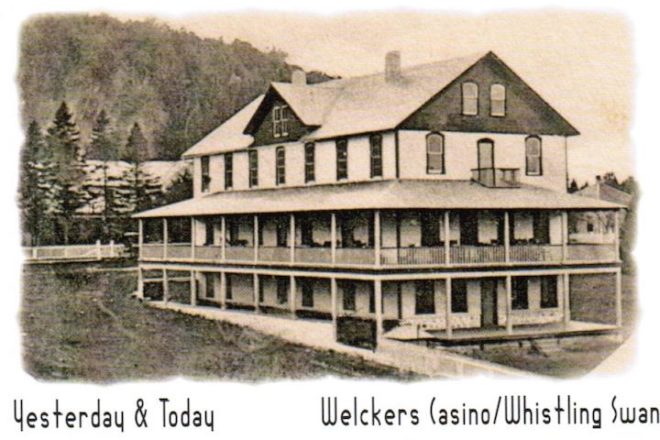 Today the Whistling Swan is known as one of the county’s finest restaurants. An intimate dining room seats 56 guests who come for an inventive, ever-evolving menu, carefully curated wine and beer list, and cozy confines.

Since 2003 it has been under the stewardship of owners Bill and Michelle Tressler and manager Scott Zimmerman, who also manages the seven guest rooms upstairs.

Although the history of the kitchen goes back only a few years, relatively speaking, the building has a long and storied history: eight owners, four names and a life in two counties, with a trip across the ice that has become the stuff of Door County legend.

Dr. Henry Welcker built the Henriette – what would become the White Gull Inn – in Fish Creek in 1896. With room for 150 guests in the main building and cottages, he soon equaled E.C. Thorp as one of the largest summer-hotel operators in the county.

Welcker’s early guests were often German “people of refinement” from Milwaukee. He modeled his program after European health spas of the Victorian era, where guests were required to follow a schedule that included exercise, hearty meals, rest and cultural stimulation.

Providing a special place for cultural experiences for his guests was the reason for the doctor’s purchase of what came to be known as Dr. Welcker’s Casino. Originally called the Lumberman’s Hotel, it was built in Marinette in 1889. Around 1906, the entire hotel was disassembled and brought across the Green Bay winter ice to Fish Creek. Elegant furnishings, Asian rugs and a grand piano arrived from Sheboygan and Milwaukee.

Women had a sewing room and a card room for playing bridge or mah-jongg; men enjoyed billiards; and children played ping-pong in the basement. There was a library, a music room and a room for writing letters. Guest rooms were on the upper floor.

The Great Hall on the main floor was used for literary programs, dancing parties, plays starring guests or visiting actors, and concerts by professional musicians such as the famous opera singer Madame Shumann-Heink. It was also the site of frequent events to raise money for the Red Cross during WWI and women’s club meetings, where “dainty refreshments” were served. A dining hall across the street from the casino served guests from both Welcker properties, seating 120 at a time. Bath houses and a laundry were located on the shore.

After the Welckers’ deaths in the 1920s, Dr. Welcker’s niece Martha Fahr ran the resort until her death in 1939, when the property was split up and sold to various people. It took a long time to settle the estate because the proceeds were to go to people in Germany, and communication was difficult because of the war. Ruth and Foster Olson then ran the casino for a year or so.

From 1945 until 1966, Sam and Mary Haskell operated the casino, renamed Peninsula Lodge, along with the cottages at the Henriette, referred to collectively as Maple Crest. During the 1950s, the lodge advertised classical music with “a bite or a complete dinner.” Although the Haskells did not own the lodge or the cottages, they did build a small hotel nearby – now the Fish Creek Motel. Herman Krause owned the lodge from 1951 until 1956, when the charge for a room and three meals was $7 per day.

Roy and Mary Cornelia Porter from Park Ridge, Illinois, purchased it from Krause in January 1956 and advertised a public dining room with an American or European plan menu. Jacqualyn Hurlburt bought the lodge in 1959 and sold it to brothers James and Jerald Newman in July 1973.

Less than a year later, Carl Hart, the Gibraltar town clerk; and his wife, Ellie, a teacher at Gibraltar, bought the lodge and renamed it Proud Mary. They had previously owned the Blue Willow (now The Cookery), but were cautioned that it was a hard time to be starting a new venture that was entirely dependent on tourists.

Still, they put a tremendous amount of effort into restoring the building, while respecting its origins. Two baby grand pianos were reminiscent of musical evenings of a half century past. The owners’ living quarters and 10 guest rooms were refurbished, and a glassware shop was planned for the lower level. Peter Steinmetz established an art gallery there during the summer of 1974.

In 1985, Andy and Jan Coulson, longtime owners of the White Gull Inn, bought the Proud Mary, finally bringing the two properties under joint operation again after 46 years. They did major renovations, and Jan operated a shop on the lower level that offered upscale women’s and children’s clothing.

Jim and Laurie Roberts, who had owned the Griffin Inn (now Wickman House) since 1986, bought the hotel from the Coulsons in 1996.

They sold it in 2003 to its current caretakers, Bill and Michelle Tressler, owners of Hinterland Brewery in Green Bay since 1995. Bill spent much of his childhood in Ephraim and on Kangaroo Lake and loved the area. On vacation in Ireland, he and Michelle had stayed in B&Bs and thought how nice it would be to create a similar small, friendly restaurant in Door County.

The Whistling Swan proved to be exactly what they were looking for.

In 1997, the buildings that once made up the resort were designated the Welcker Historic District on the National Register of Historic Places.

Welcker Was an Interesting Man

Dr. Welcker reserved the right to refuse to rent rooms based on whatever basis he chose: attire, personality or attitude. One story, cited by Ann Thorp in Volume 5 of the Door County Almanak, claims that he turned away a young member of the Pabst family and his party because of their “racy and outlandish clothes and rather forward manner.” Later, when his niece ran the resort, it was reported that guests stayed by invitation only.

Smallpox was a recurring problem in the county during the early years of the 20th century. Knowing something about virology from his training in Germany, Welcker repeatedly drew blood from 11-year-old Merle Thorp, who had apparently survived the disease, and used it to make a vaccine for other village children.

When Welcker bought a farm to grow food for the White Gull Inn, he purchased two horses from Asa Thorp, the founder of Fish Creek. They turned out to be trotting horses, with a diagonal gait in which the left front and right rear legs move simultaneously – not suited to plowing corn! The contract to purchase the horses was canceled.