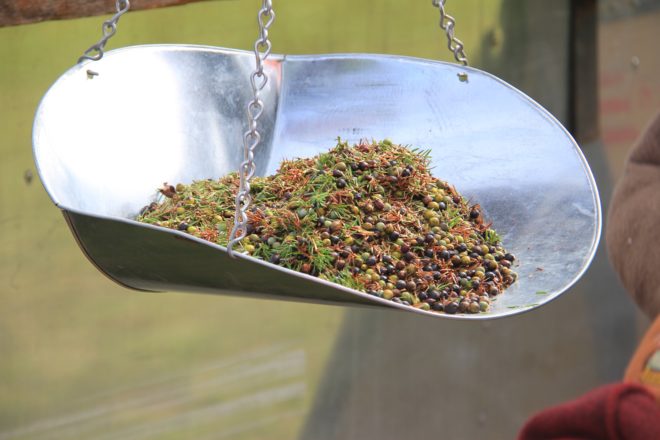 Each team of harvesters competed to pick the most juniper by weight. Photo by Aleah Kidd.

Fifty bartenders walk into a bar… it sounds like the start to a joke, but instead, it was my Tuesday night. Having just arrived to Washington Island, the group of bartenders, bar owners and myself were there to partake in an annual tradition that has helped bring new life to the local economy and agriculture, the Death’s Door Juniper Harvest. The multi-day event is hosted by Death’s Door Spirits, a craft distillery located in Middleton, Wis., but with deep roots in the soils of Washington Island.

In the early 1900s when the timber industry on the island declined, so did the population and the vibrant agriculture that was once the lifeblood of the community. Island population and viable sources of income grew scarce, posing a unique challenge to islanders and farmers longing to reside there full time.

Since the distillery’s start in 2005, founder and CEO Brian Ellison has worked closely with agricultural consultants and Washington Island farmers to determine which crops will both fulfill the needs of the distillery while also flourishing in the island’s marine microclimate. Through the years this venture has turned five acres of hard, red winter wheat into 1,200 acres grown to be used by Death’s Door Spirits in their gin, vodka and whisky; what started as a sustainable agricultural project has evolved into the largest craft distillery in Wisconsin, with products distributed domestically and globally. 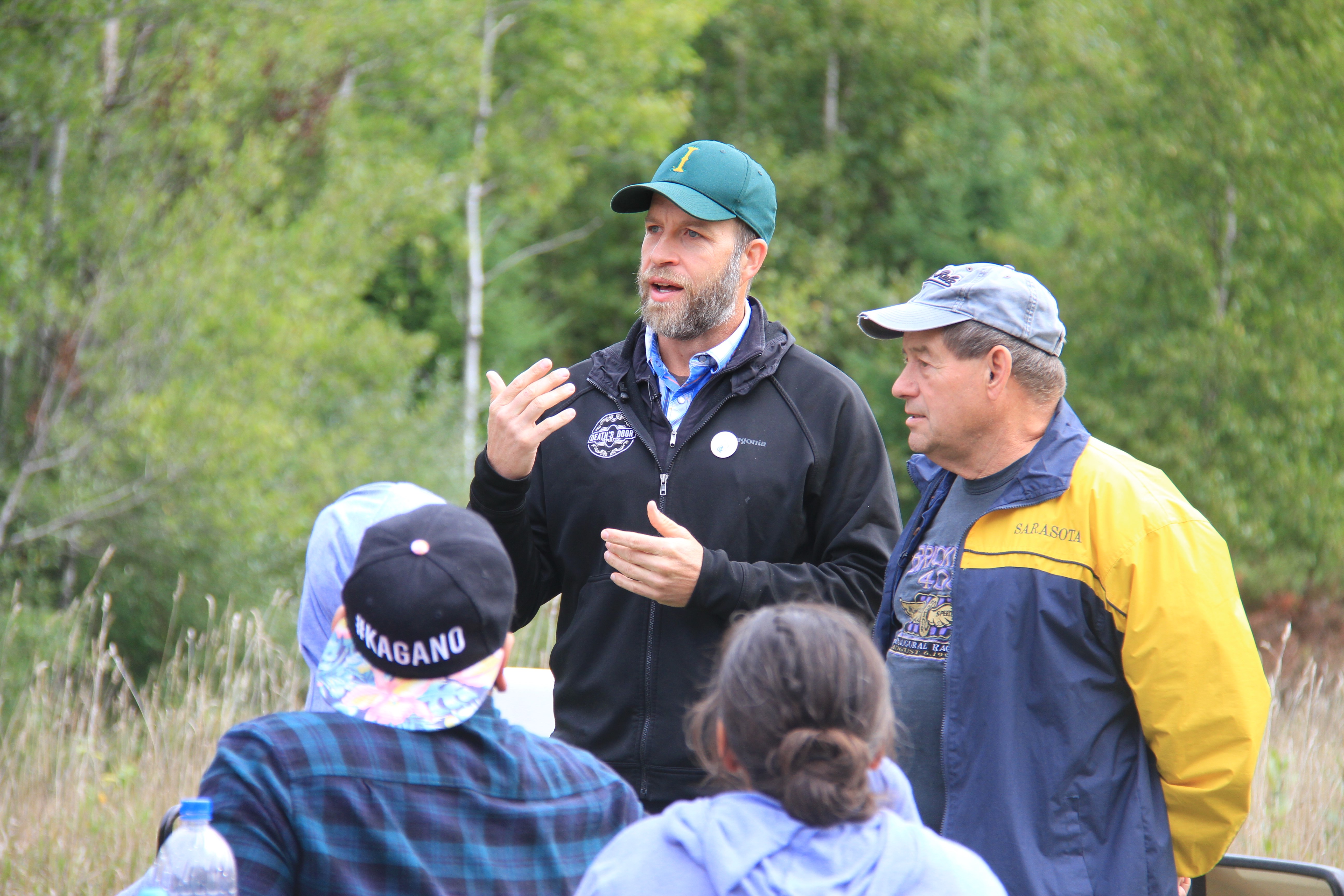 Death’s Door Spirits founder and CEO Brian Ellison speaks on the tumultuous history of agriculture on the island. Photo by Aleah Kidd.

The group of like-minded peers didn’t stop there; after the wheat crop proved successful, the search for alternate crops has continued and grown to include barley and juniper. Juniper is often overlooked as a crop since it’s a very common, native plant; as a member of the cypress family, the juniper plant is highly distributed across the Northern Hemisphere. Still, the United States imports more juniper each year than it grows and harvests domestically.

The annual juniper harvest event seeks to shed light on the importance of having alternate crops and how they can reduce the reliance on imports on a small and large scale, which becomes especially impactful in remote places like Washington Island. The distillery has created a mutually beneficial partnership with island farmers and a sustainable marketplace for these crops. This has led to a consistent income for more families who are now able to support themselves while living on the island and further investing in the local economy.

The juniper harvest became an annual event after the public was invited in 2007 to harvest wild juniper with Death’s Door staff and learn about gin production in the process. Despite the remote location and the fact that harvesting juniper is akin to pruning rose bushes, the event gained popularity each year until eventually more than 300 willing volunteers showed up and overwhelmed the organizers. After that, Death’s Door instituted an application process and turned the harvest into a five-day exclusive event for bar industry professionals interested in immersing themselves in the story behind Death’s Door Spirits.

Margaret Ebeling, the director of marketing for Death’s Door, commented on what it takes to be selected. “You must have applied, you must be currently working within the bar industry as a bartender or owner, and you must have a genuine interest in juniper and gin.”

This year hundreds of applicants were pared down to 50 participants hailing from around the country and world. According to the guest list, the group included bartenders or bar owners from the United Kingdom, Australia, Italy, Canada and the Netherlands, with the majority of the group traveling domestically from metropolitan areas like New York, Seattle, Reno, New Orleans and San Francisco.

As I took in the variety of accents and personalities that first night, I could sense the curiosity and excitement reverberating from the group of visitors who had never set foot on Washington Island before. The schedule for the two days on the island included a full introduction to island culture and lifestyle. Day One included a ride on the cherry train to the Washington Island School, where the group volunteered two hours of time for landscaping and painting projects followed by a swim at Schoolhouse Beach. 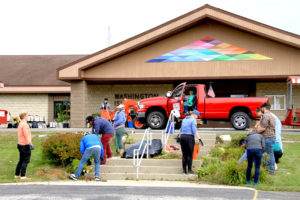 The first evening we were able to witness and indulge in a classic fish boil at K.K. Fiske Restaurant. Post-dinner cocktails were served at The Granary Saloon and Coop and from the Barmadillo – a 1956 Airstream Safari remodeled to be a fully functional mobile cocktail bar. As you may have surmised, the gin-centric craft cocktails were expertly mixed and tasted delicious.

Day Two brought us to the beautiful property of George and Susan Ulm called Greengate Farms where the juniper harvest was to take place. The retired fruit farm now hosts visiting guests on the island and welcomes the juniper harvest each year to their field of low-growing, wild junipers. After a breakfast of biscuits and gravy and spicy chilaquiles, the group was divided into six teams and each picker was given gloves, buckets and a curious-looking forearm shield that proved helpful for fending off the prickly branches of the juniper bush.

Juniper berries are actually not berries at all, but instead are small, compact cones, which is why they are inedible and rather difficult to harvest. Harvesting technique includes lifting each branch to reveal the underside and using your gloved hand to loosen the ripe berries.

“We’ve had taste testers remark that they taste citrus notes in the botanicals, which was puzzling because our gin uses juniper, coriander and fennel for the botanicals. After we tested the eastern red cedar berries, we now know that they contribute the citrus note,” said Ellison.

The distillery truly represents the spirit of Washington Island in more ways than one. Washington Island’s agricultural revival and the growth of Death’s Door Spirits is fully entwined, and intentionally so, setting a gold standard for a reciprocal farmer and buyer relationship.

By the time the group of bartenders, or newly crowned juniper harvesters, passed back over the Death’s Door water passage, we had come to understand the larger story of thoughtfully sourcing and crafting a product on the foundation of sustainable farming and production. To that, we made a Death’s Door toast:  “Many a brave and fearless soul have crossed the Death’s Door strait, today we give them honor for what became their fate. Some ships had luck upon their side, and some did sadly sink, for we who now, cross o’er Death’s Door, we raise our glass and drink.” 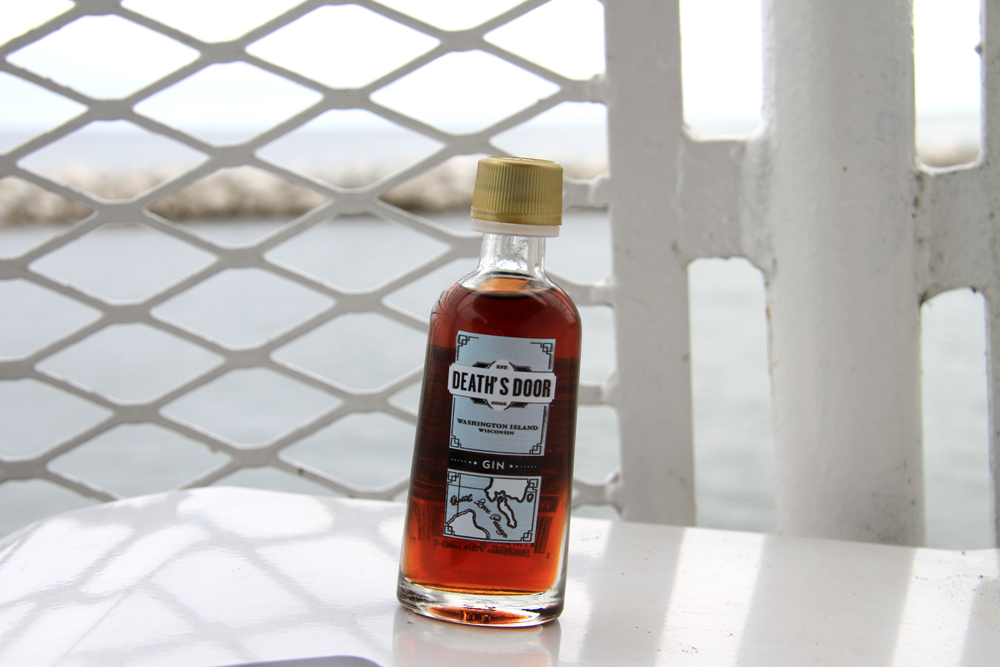