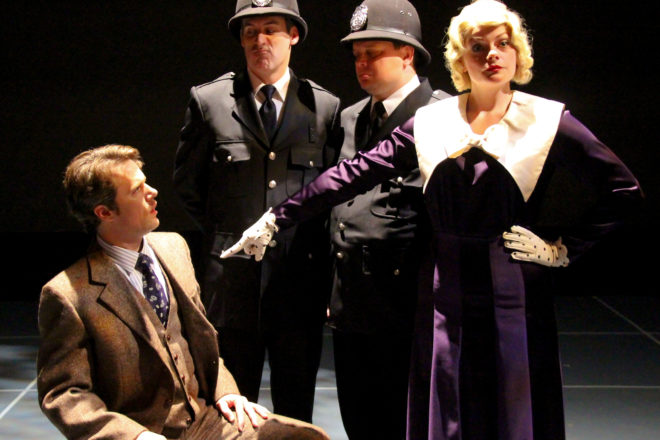 (From left) Neil Brookshire, Kevin McKillip, Joe Foust and Erica Elam are in the Peninsula Players production of ‘The 39 Steps.’ Submitted.

Peninsula Players Theatre presents the riotous spy-thriller The 39 Steps, Sept. 7 – Oct. 16. The 39 Steps is adapted by Patrick Barlow (based on the Alfred Hitchcock film) and the book The Thirty-Nine Steps by John Buchan. This exciting Tony Award-winning adventure mixes a fast-paced boisterous comedy with an action packed spy-thriller. More than 150 characters from Hitchcock’s film are performed by a ridiculously talented cast of three men and one woman.

Set in 1935, British everyman Richard Hannay finds himself bored and tired of his life. “Come on Hannay,” he says to himself. “Pull yourself together man! Find something to do, you bloody fool!”

After a trip to the theater, Hannay soon finds himself inadvertently embarked on the adventure of a lifetime after a chance encounter with a mysterious female. He is launched on a cross-country caper to clear his name of a murder charge. The 39 Steps is packed with non-stop laughs, narrow escapes, plane crashes, handcuffs and romance – all while Scotland Yard’s finest are on Hannay’s heels in unrelenting pursuit.

The 39 Steps is under the direction of Karen Sheridan. The cast includes Neil Brookshire, Erica Elam, Joe Foust and Kevin McKillip.

“The 39 Steps is just nuts!” said artistic director Greg Vinkler. “It’s imaginative, funny, romantic and smart. There are lots of allusions to other Alfred Hitchcock films, but one does not need to be a Hitchcock fan to enjoy the mad adventure of our hero. It’s a roller coaster ride of theatrical magic, quick changes, suspense and outright silliness. It’s a terrific way to wrap up our 81st season!”