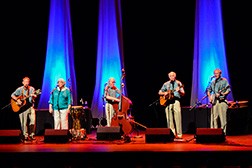 The 5 Milers in concert. Submitted photo.

The 5 Milers folk music band will return to Door County for their seventh annual benefit show on June 27. The premise of the annual event is to “give back in life,” said Rob Billings, one of the band’s founders and the “point man” in organizing the performance every year.

The band has raised thousands over the past few years with their shows at the Door Community Auditorium. Last year, $16,000 was raised with all proceeds going to the DCA and DOOR CANcer, Inc., an organization that helps cancer patients and their families keep the cost of medical bills down.

The 5 Milers formed in the backdrop of Neenah, Wisconsin in the 1960s.

It was during Rob Billings’ sophomore year of high school that the group initially formed. After play practice, Rob and some of his fellow students at Neenah High would gather around and sing different folk songs of the era. People would make requests and shout out favorite songs. Singing and laughing, the enjoyment of musical expression would often go on for hours.

The concept and framework for the benefit show sprung from these small gatherings. An inspired Rob and two friends, Tom Jones and Terry Bigalke, started the 5 Milers (the name derives from the group’s affinity for the song “500 Miles” by Kingston Trio) and have carried their generation through the decades in the powerful outlet of music.

Billings said the group has been “blessed with good families and good lives,” and that about 10 years ago, they felt it was time to give back. The group had two main goals in mind when this process began. One of the goals was to preserve and carry on the great folk music of bands such as the Kingston Trio; Peter, Paul and Mary; Limelighters; and a plethora of other greats of the folk era. Another goal was to give back to the community that helped develop the quality of their lives.

They started out playing at various venues in the Fox Valley and then six years ago, branched up to Door County. Members of the band are scattered around the country but come back every year for a week, on their own dollar, to celebrate their friendship and play to better the quality of the community.

This year’s DCA event is called the Friendship Concert. The band not only considers the audience their friends, but is also asking the audience to invite their friends and family to this year’s show in order to increase the size of the 5 Milers family and increase the amount given to the beneficiaries of the concert. Attendees that bring a non-perishable item to donate to Feed My People will be entered into a drawing at intermission for a chance to win gift certificates to a variety of local businesses.

Audience members consume the experience in their own ways. Some sing and clap along, and some sit and listen, reminiscing on yesteryear. Rob emphasizes that balance of music and the audibility of song lyrics is important in furthering the enrichment of the experience.

“All folk music tells a story, so it’s important to focus on the vocals,” Rob said.

And what better way to enjoy narratives on love and life than through the outlet of musical exposition and the nostalgia of a simpler time.

The benefit will begin at 7:30pm on Saturday, June 27 at Door Community Auditorium, 3926 Hwy. 42 in Fish Creek. Tickets are $15. For more information visit dcauditorium.org.