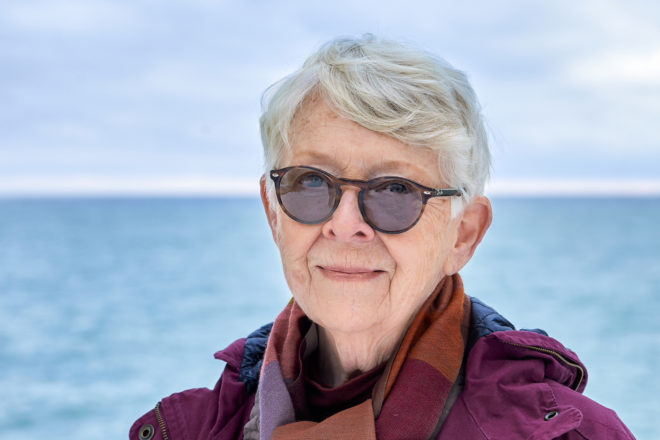 The work of Door County artist Anne Egan is best described by Dan Cross, who got to know Egan’s working methods through Idea Space, an intensive, two-week cooperative of several artists at Idea Gallery in West Jacksonport.

“Annie’s working processes are mixed-media paintings, sometimes incorporating collage, [and] envisioning a sense of wonderment influenced by the natural beauty of the Door County landscape,” Cross said. “Her works are an abstraction of someplace vaguely familiar to the viewer, yet mysteriously ambiguous.”

Egan was an art major in her youth, but it wasn’t until she moved to Door County in 1988 and started taking classes at the Peninsula School of Art that everything changed for her.

“I started out with a watercolor class, which I had never had in college, and did representational work, and then moved slowly into acrylics,” Egan said.

After she started taking classes with Wendell Arneson, an art professor at St. Olaf College in Northfield, Minnesota, she moved away from representational work, which she could do – but it felt very stiff. It was working abstractly that Egan really enjoyed.

Arneson is a mostly abstract painter who has shown his work at Woodwalk Gallery in Egg Harbor and now exhibits at Idea Gallery. Egan estimates she took about 20 courses with him, and she spent a January term – when he was on sabbatical in Northfield – meeting with him five days a week.

“It was like a graduate program with all of this independent attention, which you don’t get in a class,” she said. “He’s the consummate teacher, and he does not impose his own style on you.”

Egan was instrumental in developing the year-long Celebrate Water program across Door County in 2019. It was inspired by the best-selling and award-winning 2017 book The Death and Life of the Great Lakes by her son, Dan Egan.

Between Celebrate Water and a stream of family visits, she didn’t get back into an art groove until last year. After an involuntary hiatus when the building that housed her studio was sold and she couldn’t find another good place to paint, Egan is getting back into regular painting. Now she goes to the studio at Project Launch in Sturgeon Bay about four times a week.

“It’s tough to start carving out your own time,” she said, but emphasized how supportive her husband, Dick, has been. “He insisted that I take this space. Dick said he noticed that when I started coming here, I really was happier. It is nice to be able to leave my house and go to a spot where I’m not interrupted by the laundry or the garden work or any of those things. This is just my space, and there is something about getting into the zone.”

“They dry very quickly, so I can do lots of layers, which is my preferred way to work,” she said. “I love doing layers, and then I can scrape them off, and I can blend them. If I start out with something specific, it never ends up being that.”

Egan quotes painter Philip Guston, who said, “If you know how your painting is going to end up, why do you even start?”

Thus, one of her works – a three-panel piece inspired by the Niagara Escarpment – kept changing.

“I juxtaposed them, and I thought, ‘Oh, I’ll make it one painting out of these three’ and somehow worked them together. But I got here, and it just didn’t click. So then I started doing them separately, and they became totally different,” she said.

The large, dark one she calls “Excavations” because of the multiple layers.

“I can’t remember what was under that to begin with, but rubbing alcohol will remove acrylic paint, and so I can remove layers and expose things that happened before, and often bring out an old color or a texture that I’d forgotten about.”

It was Arneson who prompted Egan’s style and how to “just get started” on a canvas: to make a mark and get it dirty so you have something to react to instead of starting with creating a tight drawing.

“So, I don’t care,” she said. “I used an old palette, and splashed it on the canvas, and scrubbed it around, and that kind of creates a dialogue.

“I remember doing a drawing in one of his classes, and he came over and he said it was still too clean and to make a mark on it. I did, but it was very hesitant. And he said, ‘Be more active. Take that charcoal and just –’ Well, I’ve got it framed in my house. It’s one of my favorite pieces. You know, there are splotches, but it’s got life in it, and it’s got strength to it, too. But to start the dialogue, there’s got to be something to work against or to start with.”

Egan’s paintings are hanging on one of the walls and sitting on the floor of her studio at Project Launch – across Nebraska Street from Popelka Trenchard Gallery, which sponsors the creative incubator. She’s never finished learning and exploring, as is evident from the arsenal of painterly tools she takes to Florida in the form of Procreate: an artist’s app that runs on her iPad.