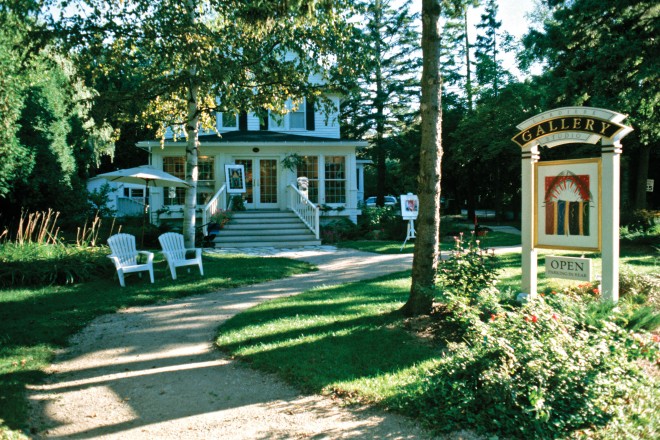 The Lardiere Gallery and Studio is located at Hwy. 42 and Hidden Spring Road in Ephraim.

Geoffrey Lardiere graduated in 1973 from The School of Design at North Carolina State University and launched his career as an abstract artist with an exhibition at the North Carolina Museum of Art Raleigh. In 1975 he moved to Los Angeles to become an award-winning National Advertising Art Director. Several years later he joined the faculty as a professor at Florida State University and taught in the art department until 1983. He has been working as a full-time artist since then, with prestigious commissions for art in public spaces throughout Florida and studios in northern Florida and also here in Ephraim, Wisconsin.

Geoff, his wife Ann, and their daughter Brinley spend summers in Ephraim, where he keeps a beautiful studio and gallery. Geoff and Ann were drawn to Door County by the look and feel that reminded them of Europe. Lardiere Gallery and Studio is a wonderful mix of both Geoff and Ann’s talents. In summer, you’ll find easels with Geoff’s paintings standing amidst beautiful gardens, which Ann has carefully planted and designed. Winters are spent in a small rural community, just south of Tallahassee, Florida, where they can spend time with Ann’s family. Geoff paints throughout the year, but admits the busy summers in Door County are spent more in the gallery than the studio.

Geoff describes his art as paintings of the inner soul. “I paint my soul – my inner soul – my visual life.” His work has little to do with representation of the outside world. He describes his process as instinctual, finding form and color through a sense of rightness that is based purely in aesthetic decision. You can find evidence of this in his extensive production of works over the years. The evolution of styles parallels struggles of grieving, pain and healing within his own life.

Geoff and Ann lost their second daughter, Gia, in 1988, at the age of ten, during open-heart surgery. Before Gia’s death, Geoff began a series of paintings called The Birmingham Studies as visual prayers. After her death, Geoff continued with other series, seeking to remember her soul and find healing within her loss. The series that followed – Down the Middle, New Birmingham, and the Forward Studies – Geoff describes as “a way of coping, healing and moving on.” Gia’s illness and her death were pressures that moved Geoff to paint and work through his grief, but he recognizes “you don’t get over it, you just get better with it.”

In works following Gia’s death, line and forms transition from tighter, more controlled geometric shapes into less structured, curvilinear forms. Geoff talks about this transition as painting from a state similar to half-asleep and half-awake, where the unconscious comes to the surface and becomes a new conscious realization. After working on a series for two to three years and exploring all the relevant aspects, a spark within that series evolves to stand on its own. “Painting is an adventure,” Geoff says. He describes his process as somewhat like painting yourself into a corner and then working free. His work now is fast and spontaneous. “You make a mark and you have to react to it – instinctively.” He recognizes that there must be tension in his paintings. This is the nitty-gritty part of his soul reacting as he sees it.

Geoff talks often about the “struggle to strike a balance between contradictory elements – the conscious and the unconscious, feeling and intellect, structure and spontaneity, freedom and necessity, grace and crudeness.” This element of dichotomy carries through all his works and is the structure from which all else grows. His abstract paintings are the essence of the struggle to understand the emotion, feeling, and spirituality within a realistic, hard consciousness.

Geoff’s artistic processes are spiritual and intuitive. His upbringing as a Roman-Catholic and then his marriage into Ann’s Episcopal family guided him into deeper studies of the Old and New Testament. After his first reading of the Old Testament he set out to “do a piece about what I’d learned.” The pieces he created have a modern language of symbolism, which is inherently unique. Even in the painting displayed beneath the gallery sign in Ephraim, tall color blocks are joined by an all-encompassing arch – shapes reminiscent of the great basilicas in Europe.

Abstract art is not always absorbed easily by the viewers who pass through the gallery, and because of this Geoff finds himself teaching once again. He likens abstract art to music, commenting that “people don’t struggle to understand what a musician is trying to say.” Instead, they simply listen and feel.  Additionally, he says, “People put a lot of pressure on themselves to understand the work, but paint doesn’t have to represent something.” He has patience though, and finds discussing his artwork helps him to continuously grow.

Lardiere’s interest in the arts extends beyond painting into large-scale sculptures as well. Geoff’s career in the arts began first with his mother’s prodding to become an architect, but he soon transferred into the visual design department at North Carolina State University, where he found the painters more interesting. Even then he was interested in building, and worked with his brother, a contractor on a number of projects. He found that building was like a sculptural painting. Geoff’s large-scale commissioned sculptures maintain the color and style of his painting and print works. The form and line of his painting translate well to swooping arcs of aluminum and fields of glossy color. His sculptures can be found in a number of public places throughout Florida.