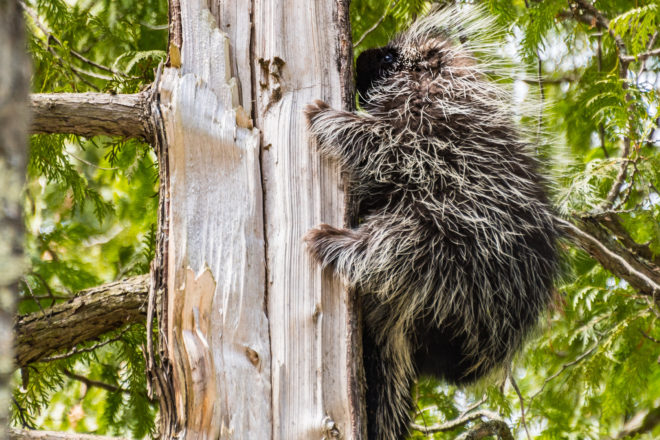 A porcupine climbs a dead tree. Photo by Len Villano.

A few weeks ago, as my students and I were hiking some trails at The Ridges Sanctuary, we were fortunate to come upon two porcupines that might have been a mother and her youngster, born earlier this year.

We watched as they slowly left the ground and climbed a tree, and we marveled at their murmuring sounds of communication. They didn’t appear to be afraid; they just wanted to get out of our way and into a safe place high in the aspens.

These animals are one of the largest rodents in North America, second in size only to beavers. Porkies weigh an average of two pounds and are two to three feet long. They are enclosed by about 30,000 quills, which are two to four inches in length.

They cannot shoot their quills, as many people believe, but these sharp, barbed means of protection are attached rather loosely to the skin. Therefore, when a predator gets close, they can turn their back and swish their tail to ward it off. That’s how dogs and other animals get quills stuck in their bodies.

An important factor in the survival of these ponderous, dawdling creatures is their nearly total immunity to predators. One killer of porcupines here in Door County, however, is the fisher. Other hunters are wolves, coyotes, mountain lions and great horned owls, but cars and forest fires are, by far, the worst enemies of these living pincushions.

One obvious question is, how do they mate? The age-old answer is, very carefully! A subtle, off-again-on-again courtship that lasts for a couple months leads to actual mating. When, finally, they stand on their hind legs, come together and touch noses, the female has given the signal to proceed. Ernest Thomson Seton summed up the male’s predicament precisely by saying that the female “has complete control of the situation.”

The female is receptive for only a few hours each year. She pulls her quills tightly in toward her body and draws her tail flat against her back. The male is fortunate in that the undersides of her tail and belly are soft and lack quills.

Newborns, called porcupettes, have soft quills at birth that harden within a few hours. The well-developed baby, which weighs as much as 20 ounces and can be 10 inches long, has the distinction of being one of the largest offspring – in proportion to its mother’s size – born to any animal. By two days of age, babies are already capable of climbing trees, eating leaves and defending themselves.

I remember seeing some hemlock trees in the Toft Point Natural Area that were being stripped of their bark. We found this in the middle of winter, with debris and a thick layer of porcupine droppings covering the snow on the ground. Porcupines can stay high in one tree for weeks while eating its leaves and inner bark.

The oval droppings, three-quarters of an inch in length, looked like finely ground sawdust molded into very uniform shapes. Studies of captive porcupines have found that an adult animal can produce up to 200 droppings per day.

Bark stripped from the limbs and trunks of nearby red maples indicated at least part of its current diet, and many large hemlock trees in the area surely were supplying a good portion of its food as well.

These hearty eaters prize lily and other shoreline plant roots – plus the bark, twigs and leaves of trees – as food, and hemlock trees rank as favorites, followed by aspen, basswood, balsam fir, spruce, arborvitae, pine, maple, birch, beech and willow.

One animal frequently remains in a tree until it has consumed all of the twigs, leaves or needles it can reach. The unusual and grotesque shapes of some aspens and hemlocks we know of may be traced directly to hungry porkies of several years ago.

Teeth patterns clearly visible on the trunks of the maples indicated the animals’ fondness for the inner bark. Their teeth are self sharpening and continue to grow during the animal’s lifetime.

Years ago, there were attempts to restrict damage to some wooden signs at a state park after porcupines had gnawed on the lower edges. Hardware cloth had to be fastened over that part to stop the chewing.

Here is a creature that is painstakingly slow in its movements – other than swinging its tail in defense – but fast in biting off branches and eating leaves and needles. It cannot shoot quills, but this docile-looking animal is serious with its quill-weapons nonetheless: It can bring hours of anxiety to dog owners and plenty of pain to the dogs.

The remarkable porcupine remains in a class by itself: a rodent to be respected and admired.