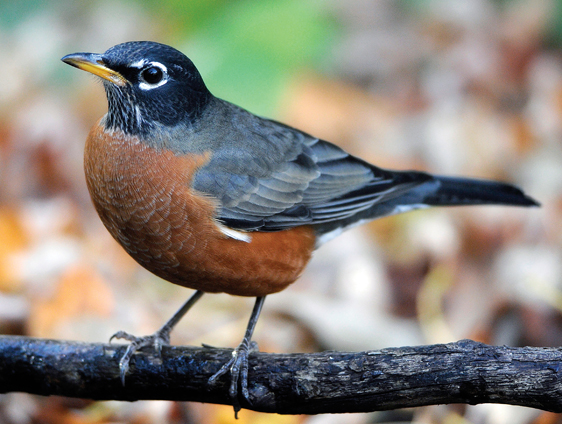 The largest thrush native to North America is the American Robin. Not many people know it was the early English colonists in America who gave the bird its name. No doubt they missed the birds and plants of their British homeland. The bird they remembered upon seeing our native thrush was the European Robin (Erithacus rubecula), a smaller 5½-inch long fine singer with a soft, brick-red throat and upper breast.

Had these Englishmen looked closely at this newly discovered “red breast” they immediately would have seen their native European Blackbird (Turdus merula) written all over its feathers. That species is solid black with a yellow bill and sings much like the American Robin. Turdus, the genus name for our robin, is Latin for thrush. Migratorius, the species name, is self-explanatory. 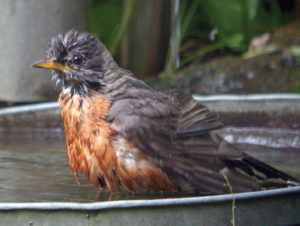 The American Robin is one of the most widespread birds on the entire North American continent. It nests in 49 of our states as well as in every Canadian province and is traditionally referred to as the harbinger of spring. It is the state bird of Wisconsin, Michigan and Connecticut.

The Wisconsin Breeding Bird Atlas shows how abundant the robin is in our state. Find the atlas at uwgb.edu/birds/wbba/ and under the Results tab, look at the species maps section and click American Robin. It is a well-established nesting species throughout the state.

For nearly all winters since I began doing Christmas Bird Counts (CBC) in Wisconsin, starting in 1958, at least one robin was seen during the count day or the count week. It was the 1964 CBC I did with Harold Wilson that we saw more than 60 robins just in the Village of Ephraim. They were all over the place feasting on wild fruits like purple nightshade, wild grapes and crabapples.

Another high count was on December 19, 1998, when our group saw 224 robins along Cove Road near the Sturgeon Bay Ship Canal. The tangles of wild fruits, along with domestic fruiting shrubs and trees there, provided wintering birds with a haven of good food.

Species of trees and shrubs whose fruits are known to be favored by robins include Hawthorns, Burning Bush (Euonymus), any of the Dogwood shrubs, Viburnums, Sumac, Mountain Ash, Wild Grape, Highbush Cranberry and even frozen apples. 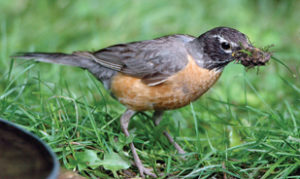 During the summer robins are largely, but not entirely, meat eaters existing on grubs, caterpillars, earthworms, bugs, flies and spiders. In late summer, when more wild fruits are available, robins gradually turn to being entirely vegetarians for the remainder of the fall and winter.

Often when a robin is spotted during the middle of winter the cry “early robin” goes up. Chances are good that this robin was a far-northern nester that found the late fall food here to its liking and had no reason to fly farther south.

As I think back to my boyhood days the first bird I can remember was a robin. One experience stands out in my memory. It occurred during the early part of our summer vacation at home. A robin built a nest between the house and the curved part of the gutter drainpipe. The nest was at least 15 feet above the ground. Naturally we took an interest in the developing family. To be sure, especially after the young had hatched, they took an interest in us. The adult birds would let us get just so close before they would dive-bomb us away.

The day came for the young to leave the nest. Chances are we boys would have missed the occasion had it not been for a fledgling that got one of its feet tangled in a long piece of string contained within the nest material. It launched itself from the nest and ended up dangling in mid-air, much like a clock pendulum, squawking its little head off. 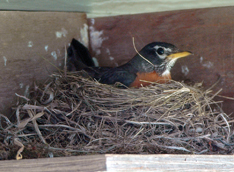 Fortunately we boys were playing nearby and my oldest brother, Ivan, was strong enough to hoist the long storm window ladder up to the nest. I’ll never forget the robin’s panic that set in as Ivan approached the tangled creature. The parent birds nearly turned themselves inside out trying to protect their youngster. How they screamed and shrieked their opposition to our heroic efforts, little realizing that we were rescuing one of their babies. Within seconds the entire family was together and we all breathed more easily.

I believe a lot of people, in watching robins return to their yards each spring, wonder if these are the same birds that were there last year. A professor from the University of Wisconsin did a nationwide study of bird banding returns for robins and found that about 75 percent of the returning robins settled within 10 miles or less of their original home.

Adult male robins have darker heads than the females and often arrive a week or two earlier than their soon-to-be mates. Some will fight viciously to secure their own territory and will defend it from other males. It has been said that a robin’s number one enemy is not a hawk or a feral cat, but another robin after the same things the first one has found, namely food, a good nesting site and a mate. 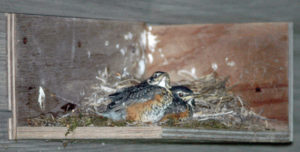 A warm, wet spring is just what the female robin needs to begin nest-building. She will pack her beak with mud to lay a foundation for the structure. Then many grasses and dried plant stems are collected and pasted into the soft mud to form the actual nest. It is lined with fine grasses and molded by the female’s body.

They will nest in a shrub, forked branches of a tree, a substantial horizontal branch or on any sturdy ledge on a house or outbuilding, or occasionally on a post or a cliff ledge. Usually four to six eggs are laid and will be incubated for 11 to 14 days. The young will leave the nest in about 14 to 16 days and will be fed by both parents, or mostly by the male if the female is building a new nest. They will often have two broods in a season, or three if the conditions are perfect.

As in many species, albino robins can occur in a brood. A true albino will be entirely white with a pink eye. Partial albinos may be more common with only sections of the plumage being white and the eye will be dark as in a normal bird. 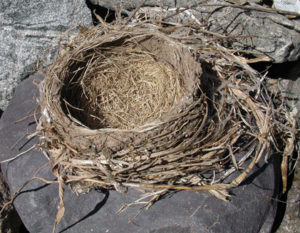 The tameness and abundance of robins, rather than making them too commonplace to even look at should make them one of the most respected and often-studied birds in our area. Beware of the day here in our county when robins will become rare, for they are good gauges of a pleasant, healthy environment for humans to live in.

Help our state bird by creating safe and attractive nesting conditions. Be sure to have fresh water placed out for the birds and enough wild areas for them to forage and build nests. You will be rewarded by having Mr. Robin Red-Breast serenade you in your yard and you’ll enjoy seeing the spotted-breast youngsters once they are off the nest and visiting the birdbaths.