Spring birds are on the move much earlier this year than in the past. For example, our friend Max Martin reported hearing his first Woodcock on March 6 – two-and-a-half weeks earlier than usual.

It was 56 years ago that Professor Robert McCabe and several members of one of his University of Wisconsin – Madison wildlife management classes introduced a group of us one early April evening to the thrill of Woodcock watching.

Undoubtedly, McCabe learned of this annual spring ritual from Aldo Leopold, his mentor and predecessor, who was at the head of the wildlife management department. Since then I have missed very few springs of enjoying this evening performance.

What further cemented my devotion to this exciting activity was reading and re-reading the essay “Sky Dance” in Aldo Leopold’s classic book A Sand County Almanac. Having read this, followed by the experience of the Woodcock show, it’s easy to understand the yearning each spring to witness one of the most beautiful of all wild bird courtships.

Few things offer greater pleasure than introducing people to some unusual events in nature which will so impress them that they will not want to miss them in future years. The April sky dance is one of them.

The American Woodcock is a shorebird that lives in the open woods and shrubby fields, especially those near stands of Aspens and Alders that happen to be in habitats containing moist loam and plenty of earthworms. It is, I predict, a bird that will warm your heart and lure you back to its spring nesting haunts year after year.

The memorable earth and sky performances of the males, starting now at around 15 to 22 minutes after sunset, are best observed with the bird between you and the western sky. The comical, high-pitched, quack-like “peent,” sounding as though it was being produced on some sort of reed instrument, will direct you to its “performing stage.”

Watch carefully the general area from which the “peents” are emanating because soon the bird will take to the air. That’s when you should quickly assume a position low to the ground, around 50 or more feet toward the east, if possible, from where the bird took off.

The bird will make long sweeping spirals as it rises in altitude, its wings producing faint twittering sounds, until it reaches around 200 to 300 feet. Now he comes downward rather quickly, slipping from side to side in tight spirals while producing a very musical Robin-like chirping with his wings. Then he lands practically in the same spot from which he began.

This amazing April sky dance may be performed to impress a female before mating with her, or while she is incubating her clutch of eggs or caring for the young. The male does not help with locating a site for, or with the building of the flimsy nest, incubating the eggs, bringing food to the female or caring for or feeding the young. Nevertheless, the female must be impressed with his incredible evening performances, which may continue for a month or longer.

Two to six eggs are laid, the usual number being four, around the middle of April in our area. Most often the shallow nest is less than three feet from the base of a small tree or shrub. Obviously the female must briefly leave the nest occasionally to feed herself while the incubation goes on for 20 to 22 days.

The downy chicks, being precocious and able to walk and run within minutes after hatching, leave the nest and are cared for and fed by the female for several days. By 14 days they can fly short distances and are capable of sustained flight at 18 days. 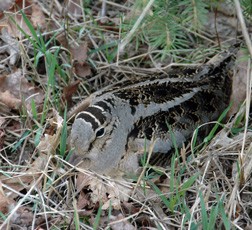 The female Woodcock’s plumage blends in with her surroundings. Photo by Roy Lukes.

What amazingly effective protective coloring these baby birds have, which could be described as a dead-leaf camouflage. The only nest of young I personally found was many years ago while exploring on Bunchberry Ridge at The Ridges Sanctuary with my friend Karl Bartell. All the while (for no more than around 30 seconds) I quickly took a few pictures of the young in the nest, the female made circular low fluttering flights around us while giving forth whimpering-like distress calls.

A disruptive pattern of brown, buff, gray, light cinnamon and black causes the nesting female to virtually disappear before your eyes. The upper part of her body has distinctly darker colors than her chest and belly.

More than once we have unknowingly come very close to stepping on one of these creatures, usually in the middle of an Aspen grove where it was busy probing for earthworms, one of their favorite foods. What’s so interesting is that the Woodcock’s bill has a flexible tip enabling it to locate and grasp the worm without seeing it.

We and other friends have seen the bird on the ground, rocking its body back and forth, rumba-like, two steps forward, one step backward, without moving its head. It’s thought that this may cause earthworms to move around in the soil, thereby improving the bird’s chance of detecting and snagging them.

A few years ago we were informed by our friends, Carol and Ray who live in the country south of our home, of a nesting Woodcock they accidentally discovered close to a Balsam Fir tree within 100 feet of their front door.

True to form, the female sat tight as I approached her to within eight feet with camera and long lens. Not once did she flinch or appear disturbed, apparently trusting her remarkable coloration. What a thrill it was again to say “hello” to that little troubadour friend with the dark and lovely, old-fashioned “shoe-button” eyes, the American Woodcock.

It would be wonderful if these birds could realize how hard we wish the day never arrives when they and their offspring are displaced from their singing and nesting grounds by “progress” of our times. How we would miss their April sky dance!