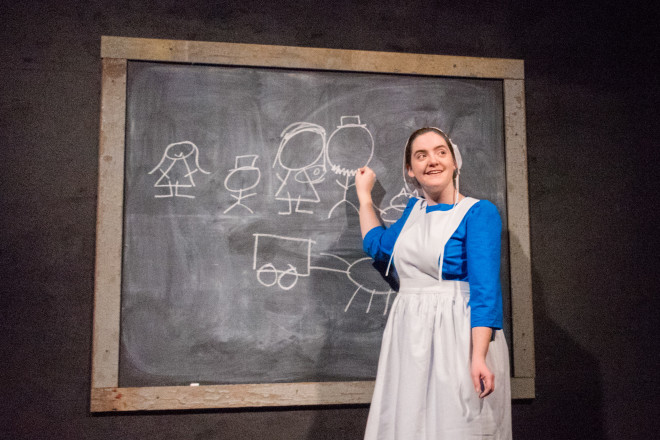 Jessica Dickey’s script for her play The Amish Project not only reads like poetry, but looks poetic as well. The dialog is printed in free verse, appropriate for the playwright’s elevated purpose, as she is not only offering solace for a tragedy and paying homage to a culture, but is also acknowledging the beauty of human potential.

Some critics have seen a connection between this play’s title and that of The Laramie Project, as both dramas deal with far-reaching implications of counter-culture tragedies. But the treatment of the subject matter in Dickey’s play also calls to mind Thornton Wilder’s Our Town, as the narrative is not as much about a crime scene as it is about a community.

Katherine Duffy, who became familiar to Door County audiences as last year’s artist-in-residence at Third Avenue Playhouse, returns this spring to star in the one-woman show, The Amish Project. Duffy will bring to life two students, the assassin, his wife, a college professor, and two townswomen.

Dickey based the play on a horrific tragedy, the 2006 shooting of nine girls who were students at an Amish school in Nickel Mines, Pennsylvania. While the unspeakable crime is painful to think about, much less relive, the playwright has not produced a documentary. The information that she had about the assault was limited to the details broadcast by reporters. Rather than interviewing sources, she researched Amish culture and wrote a play in which truth emerges through her own artistic imagination.

In many respects a one-person show presents greater challenges for an actor.

“Each character must be a full, complex being,” Duffy said. “Each must be clear to the audience with a unique flavor of voice and body.”

Because the playwright wrote the role for herself to perform, Duffy found that the author provided important clues in the text to help the actor, specific ways of speaking or moving, rather than stage directions. But the actress also drew upon her life experience for creating characters.

“My dad is an English professor,” she said, and for the role of Bill North, the religion professor, “I think Dad!”

Duffy comes to this production with a helpful background as well. Last year she was the understudy for Deborah Staples who performed the show at the Milwaukee Repertory Theater. 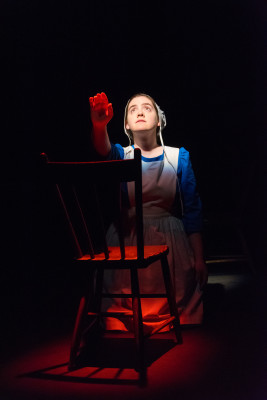 “Watching an accomplished actress work informed me while I was her understudy,” she said. However, as an understudy she had to “capture Staples’ performance.” Now at TAP she is excited “to find new things with the characters, to make different choices,” in short, to make the role her own.

In preparing for the parts she, like the author, researched the Amish way of life and found that she could not examine another culture without exploring her own.

“The Amish give up individual needs for the community,” she said. “That makes me think about how I build community in my own life.

“And how I deal with forgiveness,” she added. “They are taught to forgive. The play has challenged me to think more critically about those things.”

Unsettling to those of us who are part of the mainstream American culture is the notion of people who, rather than seeking revenge and justice, focus on providing comfort and understanding for a person who has harmed them. And Dickey reveals that ambivalence through some of her non-Amish characters.

“Each character is on a journey,” Duffy said, “processing what happened before and after the shooting, and ultimately realizing that although people may be different, they have more in common than they do differences.”

James Valcq, who is TAP’s Co-Artistic Director, directs the show, as well as providing original music for it.

“I love working with James!” she said. “He is very collaborative and I feel safe with him.”

Duffy grew up in Milwaukee and met Valcq when she was a 13-year-old student at the Skylight Music Theater. “It was a great experience for me!” she said. “He treated me more like a professional than a student and we kept in touch over the years.

“He saw me in the Milwaukee auditions in 2014 and cast me in the TAP production of Private Lives,” she said, followed by the 2015 roles as artist-in-resident and now The Amish Project.

Valcq remembers when he first met young Katherine as a student at the Skylight. “In a class with several talented young actors,” he said, “she was among the most talented.” And when he saw her at the Milwaukee auditions, he found that the promising young actress had kept her promise.

After working with her at TAP, he received an email from her inviting him to attend her understudy run-through for The Amish Project at the Milwaukee Rep. “What she did was beautiful!” he said. He had neither read nor attended a previous production of the play, but knew immediately that with Duffy in the role, it would be perfect for TAP audiences.

Jessica Dickey’s script, although at times abstract in a story-theater narrative passed from the hands of one character to another, is unified by images and themes. The result is a play that is compelling and emotionally engaging, in addition to being a significant piece of contemporary American theater.

“It’s ultimately uplifting and life affirming,” Valcq noted, “even though the subject matter is not light.”

But at the same time, “There are moments of lightness,” Duffy adds, “and each character finds a sense of peace, a lovely resolution.”

The Amish Project plays at the Third Avenue Playhouse in Sturgeon Bay, March 3-20, Thursdays, Fridays, and Saturdays at 7:30pm and Sundays at 2pm. For information and tickets call 920.743.1760 or visit thirdavenueplayhouse.com.