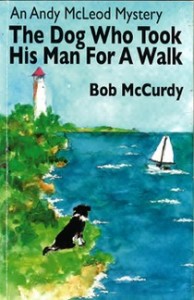 Bob McCurdy is a long time wood carver and small business owner in Baileys Harbor who enjoys evening sails and morning runs along the town’s public beach. Constantly questioning his life’s direction, abrupt changes come naturally to him. Setting aside his chisel for the time being, McCurdy is developing his Andy McLeod mystery series.

He begins this new life in Door County, where he is drawn into events that threaten to rob him of any hope of starting over. With intriguing twists of plot that reveal Andy’s past, the novel propels the reader to the final resolution.

The Dog Who Took His Man for a Walk is the second in the Andy McLeod mystery series. Andy’s Border Collie Cassidy plays a crucial foreshadowing role trying to warn Andy’s daughter-in-law of Andy’s peril when he is sailing in Lake Michigan.

Readers will root for him as he navigates his way through physical challenges and murderous events. Besides being a riveting mystery, McCurdy’s novel is a touching love story with man’s best friend.

McCurdy is currently working on his third novel in the Andy McLeod mystery series. Books are available at Novel Ideas in Baileys Harbor.