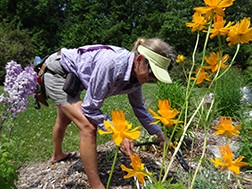 “I try to always have something blooming. Obviously Mother Nature has the final say.”

This spring, discouraged by the grey weather, gardener Kristen Peil took matters into her own hands and began making plastic flower sculptures for the commercial gardens she tends. The large daffodil blooms are constructed from plastic bowls from Target.

“They’re goofy,” she said, “and they make people smile.”

Peil has had her gardening business for 17 years.

“I just feel like I’m really lucky to get to do what I love every day and get paid,” she said. “I like the fact that people enjoy what I do. I kind of see it as being an artist.”

Peil’s striking gardens, at the Top of the Hill Shops, Fred and Company, and On Deck in Fish Creek, are immediately recognizable as works of art. One of Peil’s goals with each commercial garden is to draw attention to the business.

“I think of the garden kind of like a billboard,” she said. “I took a different approach to gardening too, where it’s almost like theater. There should be something going on almost all the time.”

Most of the businesses that Peil works with allow her to have creative license over the garden space. 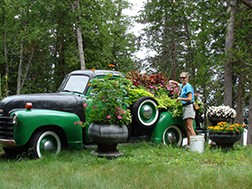 As Kristen Peil says, “Our client is a high end car collector and wanted something in their garden that would humorously reflect that. He got it – tire planters and all.”

“I think most people, artists or writers, if you’re good at what you do and people let you do it, it seems to work.”

She likes being challenged by businesses to create new and different works of art for each garden, especially in smaller gardens.

She also works with her husband, Caleb Whitney, who is Gibraltar fire chief.

“If I don’t feel like doing one job, he will do it,” she said and added, “we wear headphones a lot.”

“I enjoy the people, a lot of times on commercial properties people will ask questions, I get to be with them instead of waiting on them,” she said.

Through her husband, she learned of a gardening job available, and worked and trained at McKeefry and Yeomans. After several years she began her own gardening business. Currently, Peil maintains a client list of 50 businesses, about half of which require consistent attention.

As a child, she grew up gardening with her mother and grandmother, but considered the work a chore. “I would weed five or six rows of vegetables a day. It was hot and sweaty and I would wonder why anybody would want to do this,” she said, “but here I am…I think it’s just in your blood.”