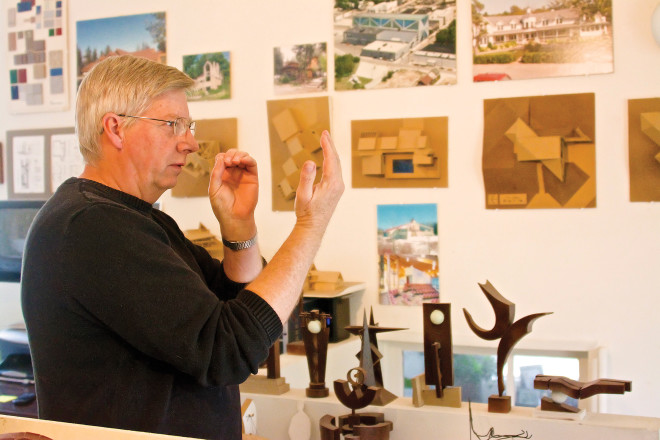 David Valentine is quick to admit that he was not a good student. The accomplished architect and talented sculptor – who dabbles in jazz music, pencil drawing, and leading Destination Imagination students – struggled with all subjects except art, music, and finally geometry and calculus.

“It wasn’t until 10th grade that I took physics and geometry and everything clicked. Those two subjects were so easy,” explains Valentine in his home office, surrounded by an array of small three-dimensional models of his building and sculpture designs. “Geometry was something I could see – I could see the relationship, I could see how the formulas worked. Physics was the same way – it made sense. So then I had the basics that led me to architecture.” 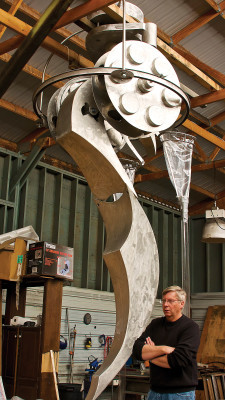 Valentine, raised near Green Bay, received his Bachelor of Architecture degree from the University of Minnesota in 1975. “My wife definitely helped me get through school, both high school and college,” Valentine says of Sandy, who he met in junior high. The couple moved to Sturgeon Bay in 1982, where they raised four boys. The home is distinctly Valentine’s, featuring a weathered steel mailbox sculpture and various renovations to the home that make it appear anything but a cookie-cutter building.

“You got to approach every building, everything you put on the landscape as having aesthetics, it should be visually pleasing as well as functional,” says Valentine, who has designed everything from corporate buildings to large industrial facilities to clinics to educational buildings as well as single-family residences with clients throughout the Midwest and as far away as Georgia, Florida, Arizona and California. (Local projects include Crossroads at Big Creek’s Learning Center, the Palmer Johnson facility, and an array of homes throughout the peninsula.)

“I approach architecture from the standpoint that architecture is an art and not science, though a lot of science is involved and it’s a physical form, it’s really a three-dimensional piece of artwork,” says Valentine. “When you look at my work, no matter what side of the building you look at, it’s like a piece of sculpture, you can walk around and it looks good from every side, from every angle.”

Ultimately, Valentine believes architecture and sculpture are “one and the same,” though he came upon sculpture almost by accident, when a friend enrolled in a sculpture course at Northeast Wisconsin Technical College and asked Valentine to help him complete an abstract piece. 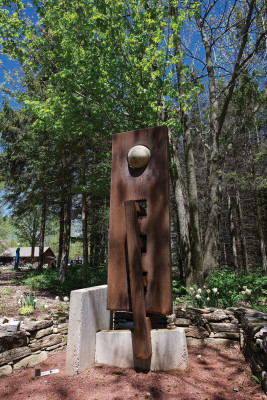 “Well, we finished it in like two weeks,” laughs Valentine, who didn’t look back and started designing “a whole bunch” of models and building life-size, abstract sculptures.

But Valentine wanted to create more than just abstract sculptures – he wanted to speak to viewers on a greater level. “I like abstract,” says Valentine. “My favorite pieces have always been extreme abstracts – you can really get your teeth into it. For me, when I do my sculptures, they’ve got a reason about them – that separates mine from just abstract. You can whip together a bunch of forms and keep working it until it looks good – I like designing with more meaning.”

“Corporate,” for example, is a visually pleasing piece, which makes a statement about Valentine’s view on many corporations’ corrupt structures and hierarchies. “It’s the workers on the bottom – and the corporation is built off the back of the workers,” explains Valentine. “Then there is middle management, they’re chasing each other for the next position and then the suit at the top who has one eye – he can’t see distance, he can’t see peripheral. That’s kind of how corporations seem to see things – it’s all about them, not about anyone else, not about the big picture.”

Valentine also has a piece that symbolizes marriage. A large ring balances on two towers, rocking back and forth in the wind. “I put a blade between the ring and the blade is all the negative things that separate people – ‘jealousy,’ ‘money,’ and other words are cut into the [steel],” explains Valentine. “The two towers support the marriage and written on the towers is ‘love,’ ‘respect,’ ‘family,’ and ‘children.’ The wind blows and the thing rocks, like a marriage, back and forth.” 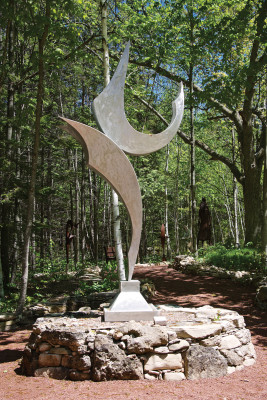 For “Adam and Eve,” he experimented with the forms before a theme revealed itself. “I ended up interlocking these pieces and it looked like ribs,” he says. “Eve came from Adam’s rib, but it’s a nice statement because there’s only two points where the bottom piece is holding the top one. Other than that they float. A lot of people look and say, ‘How does that thing hold itself up?’ It’s a great statement for a wife and husband – she supports him effortlessly – not in a negative context, in being subservient to him, it’s supporting. Strength-wise, she is the stronger one.”

Soon, however, the sculptures were beginning to take over the yard. “Sandy said, ‘You gotta get rid of these. You gotta start selling stuff,’” recalls Valentine. She suggested he stop by Edgewood Orchard Galleries. “I went up and brought some photographs.”

Now an array of Valentine’s sculptures grace the exterior of the gallery’s complex, including their Sculpture Garden. “He’s a good fit at Edgewood,” says J.R. Jarosh, an owner of the gallery. “We try to find work that people look at and say, ‘How did they do that?’ He uses normal materials – whether steel or aluminum – and it’s thought provoking and stirs emotions. And that he is such an accomplished architect adds weight to his work.”

Valentine plans to retire from what he calls “big projects” in architecture soon, but not his sculpture. “I’ll keep doing that as long as I can physically do it,” he smiles.