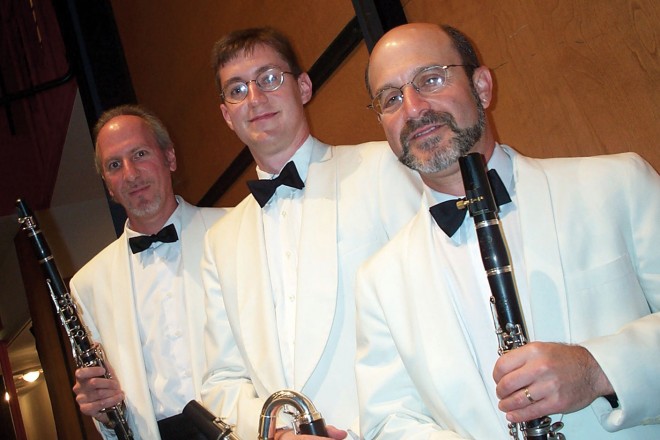 “You need to know your craft before you can know your art.”

These are the words of David Bell, a musician who has chosen to make Door County his home. While similar sentiments have surely been echoed throughout time by any number of painters, sculptors, actors, performers and musicians, the words, when spoken by Bell, seem to have a profound simplicity to them. Perhaps this feeling comes from the fact that in addition to being an accomplished clarinet player, Bell is also a respected professor of music.

Having embarked upon his college teaching career at the tender age of 23, Bell has accumulated and shared a wealth of knowledge similar to the above statement with his students at Oberlin College, The University of Akron, Baldwin-Wallace College, West Virginia University, Western Illinois University and, most recently, Lawrence University. Much of what he uses in the classroom he feels he has gleaned from his own teachers.

Bell, who grew up in Connecticut, started playing and fell in love with the clarinet in the third grade. “The thing that turned it for me,” he says, “was that there was a very good community music school in New Haven. I had really good teachers when I was growing up and the same teacher all through high school who was really focused and really encouraging.”

Bell decided to pursue music in college despite his parents’ hesitancy. “Both my brothers went to Ivy League schools, so there’s a pretty strong academic direction in my family,” he explains. “They were worried that not only was I going to be unemployed but also not well educated.”

However, after his parents visited him at Oberlin College in Ohio, they recognized that it was a good compromise, having both a conservatory and a college. They, too, comprehended the quality of instruction that their son was receiving.

To this day, Bell infuses his undergraduate professor Larry McDonald’s motto – “Clarinet playing isn’t complicated but it is difficult” – into his own teaching methodology.

By helping his students understand the technical elements of playing the clarinet, such as how to blow through the instrument, how to hold it in their mouth and how to make their fingers work properly, he is providing them with the elements to hone their craft and grow into their art. According to Bell, however, there is no such thing as a perfect performance, and musicians, by nature, will always strive to get better.

Perhaps this attitude was the allure that made McDonald approach Bell with a big opportunity the summer immediately following his graduation from Oberlin. It was mid-July of 1981 and McDonald, in addition to being a professor, was the first clarinet with the Peninsula Music Festival (PMF) in Door County. The festival, which was scheduled to commence in just a few weeks, was looking for a replacement for their second clarinet player who was ailing with dental problems and would not be able to perform. McDonald asked his former student if he would be interested, and Bell jumped at the opportunity – even though he had never heard of Door County.

“I grew up in Connecticut so, literally, I got out a map to figure out where it was,” says Bell. With the aid of that map, Bell found himself performing with the PMF Orchestra and staying at the Hillside Inn in Ephraim for a mere $25 a week. After that initial season with PMF, Bell took the following summer off; however, since then, PMF has been a consistent element in his life. The 2008 season marked the 27th of his career.

“Since 1983 I’ve been in the PMF Orchestra straight,” Bell reflects. “It was a good orchestra; I was playing second to my teacher, so it was pretty ideal.

While Bell uses the word mentor to describe their relationship, he could also use the word colleague, as the duo will team teach a course at Lawrence University this fall and have shared the stage many times. One of the most memorable of those occasions for Bell was when Robert Marcellus – Bell’s graduate school professor from Northwestern University, considered by many to be the finest orchestral clarinetist of his time – was a guest conductor with PMF. Bell had a moment of realization as he sat beside one of his professors and looked toward another on the conductor’s podium.

With a laugh, he describes the situation as “just a tad uncomfortable; it was not a low-pressure gig.” There was great significance in that moment for Bell:  “I don’t think there are many people who can say, ‘there’s my teacher, there’s my teacher and here I am.’”

So while PMF brought Bell to Door County in the first place, in 2003 he made the leap with his wife Mary to relocate to Door County permanently. Giving up a tenured teaching position at Baldwin-Wallace, Bell moved to Baileys Harbor. “We knew what we were getting into. We knew it wasn’t going to be easy,” he says. “We weren’t going to be in a full-time job with benefits and a summers-off-lifestyle, but we wanted to live here.”

Mary obtained the Assistant Director position with PMF, which she still holds currently, and Bell describes himself as a man, like a lot of folks in Door County, who wears many hats. For six seasons, Bell was the Volunteer and Facilities Coordinator   with the Ephraim Historical Foundation. He also is a server at the Mission Grille restaurant in Sister Bay and, as an avid runner having completed about a dozen marathons, he works at the Northern Door YMCA.

Pianist Judy Jackson, a fellow PMF musician and Door County resident, describes Bell “as more than a musician; he’s a Renaissance Man. He’s a wonderful teacher and a wonderful mentor; he’s interested in painting and politics…in all things that are embraced in music.”

Through all of the endeavors Bell is involved with in the community, he says, “Music is my main focus. It is what I really do; it sort of drives the engine.”

Bell’s musical commitments not only include performing with PMF, but also with Door County’s Midsummer’s Music Festival, as well as the Green Bay, Fox Valley and La Crosse Symphonies. Occasionally, Bell will perform in a trio with Mary, whom he describes as a wonderful flute player and teacher in her own right, and Lori Meyer, a cellist who runs the string academy in Door County.

Meyer comments, “Whenever I play with him I feel as though I can reach a higher level…When I play with him, he challenges me to be a better musician.”

When not striving to have the best performance possible, or simply when the opportunity presents itself, Bell delves back into the role of professor. “That’s kind of what I do now,” he explains. “I fill in for people at various places. I still have a lot of professional contacts, so when it’s not summer and crazy busy here, I get to go various places and teach for colleagues that are either on sabbatical or tour for awhile and need someone to fill in for them.”

And Bell admits that while he enjoys still having those opportunities within the music world at large, when he leaves for those commitments, he misses Door County. For instance, it was while he was at his position at West Virginia University a few years ago that Bell felt the first pangs of homesickness in his life. “I have really never felt that way about a place before. I remember my childhood fondly…but I pine for Door County when I’m not here,” he says.

Jackson seems to understand. “He’s a man like many of us who has chosen Door County to live in because of the quality of life,” she says. “It suits his needs musically, emotionally and physically.”

So, in addition to knowing one’s craft before knowing one’s art, it seems that Bell could use another adage with his students. This one the words of musician, theologian, philosopher, physician and 1952 Nobel Peace Prize winner Albert Schweitzer:  “Success is not the key to happiness. Happiness is the key to success. If you love what you are doing, you will be successful.”