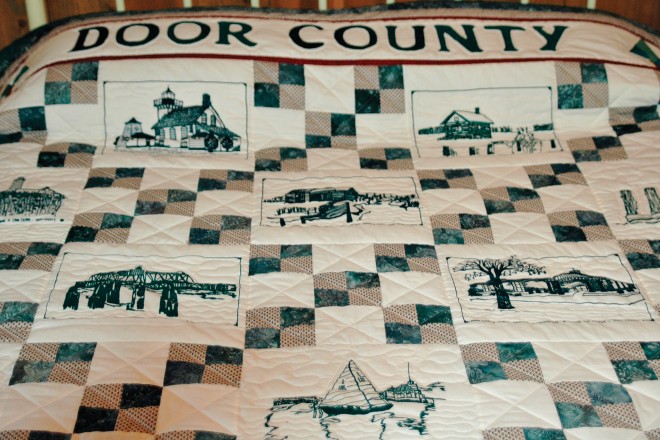 In winter of 2006, quilting as an art form came joyfully out of the closet in Door County with the Miller Art Museum’s exhibit of “Quilt National 2005: The Best of Contemporary Fine Art Quilts.” Initiated by the Dairy Barn Cultural Arts Center in Athens, Ohio, this traveling exhibition of 20 quilts was organized to provide a showcase for the transformations taking place in the world of quilting and to extend the definition of quilting beyond the traditional one. The Dairy Barn has become a national center for the promotion and development of the art quilt and today quilts are collected art objects that hang in museums and galleries in addition to fulfilling their original purpose as bed coverings.

This international exhibit of the “art quilt” was welcomed by the many quilters residing in Door County. There are in fact four quilting “guilds” that meet regularly (no longer called quilting bees) to discuss and sew and seek to further their art through local exhibitions. Loraine Brink is one such artist who showed me her work while giving a short history of the “Quilting as Art” movement.

Traditional quilting is identified by patterns handed down and used over and over with names like “Log Cabin,” “Dresden Plate,” and “Trip Around the World.” The art quilt differs from this in its greater emphasis on a more personal expression in the quilter’s design. While the emphasis on construction and skillfulness remains, the pieces are equally judged on the subjects they depict and the combination of art elements the quilt-maker chooses as the focus using the elements of graphic design: line, color and texture. The quilt can be any size since the purpose is no longer bedding and they can be constructed with many different materials combined with the fabric. The goal is to work from your own complete design, an entirely different experience than copying and sewing a traditional pattern.

According to The Art Quilt by Penny McMorris and Michael Kile, the quilt was first thought of as an art object back in the 19th Century when the Arts and Crafts Movement traveled to the United States from England. A reaction to the ornate décor of Victorian England, this movement emphasized the use of natural materials, good workmanship and simple designs. The buzzwords were usefulness and beauty and grandma’s old quilt was once again in vogue and now defined as art. The traditional boundary between the fine arts such as painting, drawing and sculpture and the applied arts like furniture making, pottery, needlework and weaving, was challenged and many fine artists began working in the crafts, making and designing useful objects because they found machine made goods ugly and poorly made. This involvement of the fine artist in the applied arts raised the status of all the crafts, quilts among them, in the eyes of critics and collectors. Now, the purpose of the finished object made less difference—whether it was to be hung on the wall and looked at, placed on the table and eaten off of, or put on a bed and slept under. As long as it was made with artistic intent, original ideas, good materials and techniques, it could be considered art.

This forward movement was halted by the Great War and was followed by the Colonial revival period where everything that looked like it might have been early American was revered. Quilt-making moved away from originality and toward replication.

During World War II with women working away from the home, quilt-making became a hobby with pre-sewn kits; it was as far removed from art as the paint-by-number drawings also popular at that time.

In the ‘60s and ‘70s during the Vietnam War people longed to move to the country away from the anxiety and bewilderment of the cities. The Whole Earth Catalogue heralded the back-to-earth movement and the Arts and Crafts revival of the ‘60s was born. In an environment of fast change, people were preserving and protecting what was left and no other craft medium could engender a longing for the past and a feeling of safety like quilts whether lying on a bed or hanging on a wall. By the late ‘60s the quilt revival was given the ultimate stamp of approval by major New York department stores that had on-going consignment contracts with quilting cooperatives.

It was in 1971 that the “fine art world” publicly acknowledged the quilt as art when the Whitney Museum of American Art in New York exhibited “Abstract Design in American Quilts.” This exhibit traveled the nation for four years and quilts went en masse from the horizontal plane to the vertical. “White on white” quilts became a prestigious thing to collect. Juried quilt exhibitions were held and one of the first was “The New American Quilt” at the Museum of Contemporary Crafts in New York in 1976 and then in 1979 the “Quilt National” was born.

The art quilt is here to stay in Door County but the traditional quilt will always be a treasured, sought after object. Stop by the Jacksonport Craft Cottage to see the exquisite Amish quilts of all sizes. Owner Sue Jarosh is very knowledgeable about the history and execution of these incredible pieces. She contracts primarily with three Amish families but her oldest association is with Fanny and Ray Miller who sought Sue out to market their quilts when they moved to southern Wisconsin from upstate New York. Ten daughters, four sons and 29 grandchildren participate in the family business. The work, of course, since they have no electricity, is hand-sewn by the window during the day on a huge trestle. You can see pictures of them working posted in the Craft Cottage’s quilt room.

Most quilters use sewing machines today not only in applying the fabric but in doing the appliqué work that binds the layers together so you can see why the completely hand-sewn Amish quilts are so revered; they are keeping that part of the art alive. Jarosh maintains that “quilters have always known theirs is an art form, they don’t need the fine art world to tell them.” The Jacksonport Craft Cottage has its own exhibition twice a year at the Sister Bay Village Hall.

Another quilt show and sale, “Fabric of the Land,” sponsored by the Door County Land Trust as a fund-raiser, was held on July 8th at Crossroads at Big Creek (Hwy42/57 at Michigan) in Sturgeon Bay. With all this quilting going on in Door County, mention must be made of the two local suppliers: Quilter’s Quest in Sister Bay at The Country Walk Shops and The Barndoor in Sturgeon Bay. Linda Batley of Quilter’s Quest claims that the rotary cutter introduced in the late ‘70s is what really revolutionized quilting because one could now cut through eight layers of fabric at once. She told me the startling fact that quilting is an industry of $7 billion worldwide. Quilter’s Quest has over 3,000 bolts of fabric and over 200 books of patterns in the store as well as kits with digitized patterns for the beginner.

So there it is, Quilting in Door County from A-Z: exquisite art meant for museums and galleries and all in one kits for people like me who may want to dive in and create a little of the comfort that great grandma knew so well. “Bed quilts are still family but the design and execution of the art quilt is my love,” said Loraine at the end of our interview; and that is about the best distinction made between the “art quilt” and its predecessor. It’s a personal one.