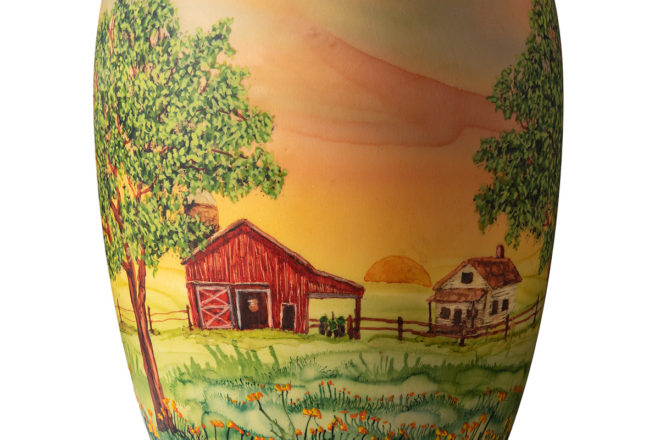 Artist Dave Turner has enjoyed working with wood his entire life, but he wasn’t turned on to woodturning until he was 55 and picked up a lathe.

“I had been warned that woodturning can be addictive — and it has been for me,” said the Evansville, Wisconsin, resident, who has works on display through Oct. 3 at Fine Line Designs Gallery in north Ephraim.

Turner developed and honed his own style over a few years — first mastering the craft of woodturning, then learning an unusual way to embellish his work with dyes. In his youth, he’d had thoughts of becoming a wildlife painter, but he gave them up when his family and career took over. Thirty years later, woodturning has reopened that creative door.

“It’s readily available,” he said. “People always want to get rid of it.” It’s also whiter wood, which allows his colorful dyes to pop on the surface.

After a half day of turning and hollowing the wood, Turner sands and finishes his pieces over the course of about a week, then moves on to painting them.

When he first approached a curator about showing his work, he received an eye roll.

“They didn’t seem too excited about another woodturner,” he said, “but it seems the painting really sets it apart.”

And in turning wood, Turner has created the canvas that took him back to his youthful ambitions.