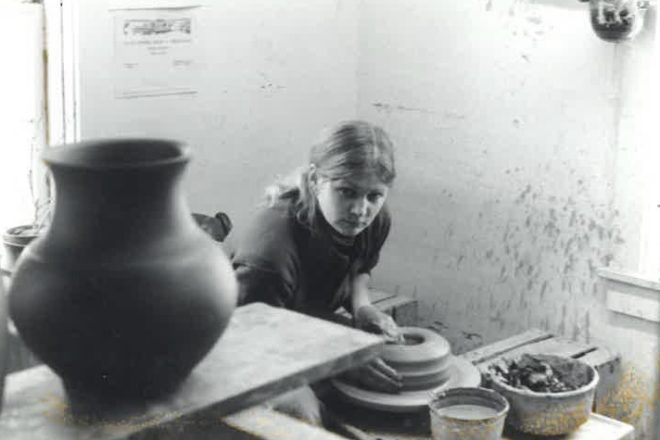 Jeanne Aurelius’s grandmother left her $1,000 when she died. Jeanne used the money to buy an electric wheel which she still uses today. Photo courtesy of Jeanne Aurelius.

Potter Jeanne Aurelius still laughs when she recalls the phone call more than four decades ago that would put her on Door County’s arts map.

It was 1975, and Jeanne and her husband, David, had just returned to Decorah, Iowa, from a visit to Door County and Ephraim’s Townline Art Fair. As a young, artistic couple, they were struck by the enthusiasm they witnessed toward local art and the natural beauty of the peninsula. With the urging of her parents, they began planting the seed for a dream studio-artist’s life in Door County.

It’s a beginning not unlike the beginnings of many of the peninsula’s artists: Inspiration gave way to determination, but they still needed to find the right space for the right price.

“He said, ‘I found what you want, but you have to come right back,’” Aurelius recalled. “We drove through an eight-hour drive and actually saw it in the dark, but it was exactly what we wanted.”

What they wanted as a pair of 20-something artists was the foundation for what they still have today on Highway 42 in Ellison Bay: two houses in need of some TLC for exactly the right price.

With a few thousand dollars borrowed from David’s parents, the couple put a down payment on the house and went about fixing it up.

“We didn’t look to see if there were good storm windows,” Aurelius said. “We didn’t look at the electricity. We just said, ‘We’ll take it’ because we really thought it was going to be a good place.”

The early days of their winter move into an old farmhouse with an old furnace and no insulation were a shock to their systems — both physically and financially — but that shock was nothing a few heavy curtains and Norwegian sweaters couldn’t fix.

By Memorial Day weekend that same year, they had put up a sign and opened the doors to Clay Bay Pottery: an artist-run studio-gallery that celebrated its 44th season in 2019.

Their setup story wasn’t an unusual one at that time. Low property prices and availability, coupled with fewer regulations and inspections, made finding a place easier, Aurelius explained. But that’s not to say it was easy.

“Everything needed to be fixed, but we were young and willing to do it,” she said. “There was no Kickstarter [crowdfunding] or anything. You just figured out, how are we going to do it?”

A lot has changed over the years in terms of property prices and availability, inspections and regulations, and the financial viability of the creative life in Door County. But as these conversations with local artists demonstrate, a can-do attitude and commitment to their craft continues to fuel the peninsula’s studio-gallery scene.

Finding a space to create art in Door County that’s commercially viable and affordable isn’t as easy as it used to be, but as relative Door County art-scene newcomers Ryan Pederson, Ginnie Cappaert and Lucy Hodkiewicz have shown, it is possible.

Pederson and Cappaert went the turnkey route, transforming established studio-galleries set up by other artists into their own spaces. Cappaert, an abstract painter, purchased the former Dovetail Gallery in Egg Harbor and this season celebrated her fifth year of Cappaert Contemporary Gallery. Pederson, who has operated Ephraim Clayworks since 2017, first served as an assistant to the Ephraim gallery’s former owner, Brian Fitzgerald, while he learned the ropes of running a creative business.

Taking over these spaces gave Pederson and Cappaert access to existing clientele and the ability to move into ready-made galleries.

“It was pretty critical,” Pederson said. “I’m grateful for all of Brian’s help. I’m grateful for the clientele that he built, everything that he put into place. I put in some work on the building, but he did quite a bit.”

Still, when Pedereson wanted to develop a kiln building on the property, he had to seek approval for its appearance from the Village of Ephraim’s historical board. Upkeep of the 1890s log cabin has also necessitated penny pinching and required permits, but his building’s location as part of a 10-unit condo association has kept costs down.

“Ephraim is quaint and beautiful and all those things, so who’s to say whether those regulations are good or bad?” he said. Pederson knows a couple who wanted to open a pottery business on the peninsula, but “they just ran into all sorts of regulations. It sounded like there would be major renovations they would have to do to be compliant. You can’t just purchase an old farmhouse, and fill it with your work, and open up the doors.”

Screenprinter Lucy Hodkiewicz of The Lightbox found her 450-square-foot studio and shop space in the Ephraim’s Shorewood Village shopping area two years ago in a less common way.

“Sincerely, the only reason I bought the place was because I found it on Craigslist for insanely inexpensive,” Hodkiewicz said.

One or the Collective?

Over the decades, the peninsula’s studio-gallery model has shifted from spaces focused on a single artist’s work to artist-run galleries highlighting the work of many artists in many media.

Hodkiewicz’s first year as a studio-gallery owner saw the young artist’s creations intermingled with those of 25 other artists. But as she cut monthly checks for those artists, she quickly tired of the consignment model, so in this, her second season, she began featuring only her work. The same goes for Pederson.

But it’s a less common sight in Door County.

“For financial reasons, selling my own work would be a really tough go because I think the buyers and collectors and shoppers like variety,” Cappaert said.

A commission approach can help with marketing, too, because many more artists are promoting a particular space.

The Costs of the Creative

A particular challenge for Door County studio-gallery owners is paying bills for 12 months a year when their doors are open only for five.

As Pederson explained, life as an artist is about choice.

“You really need to make some choices that are just not convenient,” he said. “You really have to sacrifice quite a bit, especially with any business. Normally you go into business, and it’s super profitable, and you know people like it. You crunch a few numbers and go to a bank and say, ‘This is what I’m going to do,’ and they’re like, ‘All right, we’ll give you money to get started.’ But if you’re going to be an artist [he laughed] — boy, that’s real risky.”

As soon as May hits, studio-gallery owners must busy themselves with making their products, setting up exhibits and other special events, marketing and running their galleries. Aurelius noted that the internet has afforded artists many more marketing opportunities, and although they’re free, those opportunities come at the expense of time.

“It used to be a lot more difficult to get the word out, and we’ve always used the Pulse or the Door County Advocate, but I have to say, people know how much I love my iPad,” Aurelius said. “It’s amazing how I can put up an image of a new firing, and those pots can be sold within two days. … It definitely does add to my workload, but it’s worth it because there’s so much for people to do and see, you’ve really got to get out there and toot your horn.”

“I’ve made many connections where people have seen a piece and then [have come] to the gallery,” she said. “It all works together, and it’s all pretty vital in the arts.”

Although these artists’ dedication to brick-and-mortar is apparent, those free marketing tools are crucial for capturing the attention of today’s busy tourist. Still, quality matters more.

“If I’m focused on the work and the work is good, then people will come back, and people will talk to other people, so that’s the priority,” Pederson said.

When the end of October rolls around and seasonal businesses close up shop, it’s not always a time of rest for artist-run galleries. Keeping things afloat financially during the November-through-April off-season means picking up restaurant or bus-driving gigs, or in Cappaert’s case, maintaining a strong artistic presence elsewhere.

“I don’t have all my eggs in one basket,” she said. “I’m also showing my work at six different galleries across the country … so I’ve got income coming in from all of those, not just from my studio-gallery in Door County. That’s a very necessary component. It’s all parts that make the whole picture work.”

When Aurelius thinks back to their early years at Clay Bay Pottery, she recalls a different kind of art buyer — and tourist — than she sees today.

In recent years, Door County’s food-and-drink scene has burgeoned with new breweries, wine bars and restaurants opening every year. It’s a different scene than the one the Aureliuses opened their doors to, when tourists drove the back roads to visit galleries, meet artists and enjoy nature.

“[Art buyers then were generally] in their 50s, needing a wedding present, needing a dinnerware set,” she said. “Those people now are in their 90s, or they’ve passed away. It’s interesting just getting people to come into Clay Bay with so much that’s up here. There’s a different attitude. I think many people are willing to pay good money for experiences and good food, but they pride themselves on not wanting anything. They’re less interested in buying things, I think. There’s a group of them. Then there are other people who still love art and come in and say, ‘I love this stuff’ and pride themselves on only using pottery that has been made and not manufactured.”

It’s a constant question for a group of creatives whose livelihoods depend on others taking an interest in their artistic expressions.

“Maybe the question is, do people value art nowadays? Are people interested in humans expressing their souls as opposed to having a beer? I don’t have any answers, but I do experience that quite a bit,” Pederson said. “It’s always going to be like that, but the volume of people who appreciate handmade art, is that increasing or decreasing? Are there enough people to sustain you?”

These are questions that creatives and other entrepreneurs have likely asked for decades, but if the current studio-gallery scene is any indication, Door County’s artists will be just fine.

“I think what we have as an artist community in Door County is really unique and pretty amazing,” Cappaert said. “I think it will always continue to be an artist haven. I think that will cycle through as far as numbers, but I think the ones who are going to choose [to open studio-galleries] are going to be very passionate about their art and their community. I don’t think it’s going to go away. I think it’s always going to be one of the main draws to Door County.”