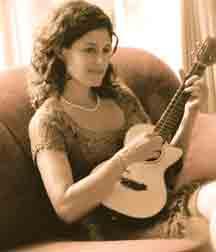 Intro to music:  Goffin’s parents are song-writing partners Gerry Goffin and Carole King. “They wrote hit songs at home from the time I was a baby. My babysitter was Little Eva before she sang the Loco-motion, and I used to watch the Ed Sullivan Show as a young child [with guests like the Supremes, The Beatles, and the Rolling Stones]. As a little girl, I also loved listening to the Philadelphia Orchestra conducted by Leopold Stokowski in the movie Fantasia while looking at the gatefold artwork of all of animated characters. When The Beatles started incorporating George Martin’s arrangements later, I felt the Supremes and Fantasia merge into my passion for songs.”

Sounds like:  “One of my old recipes for inspiration – take a teaspoon of The Supremes, blend it with a smattering of Fantasia, mix in gently some Brian Wilson, slice liberally with Paul McCartney segments. Sprinkle Hoagy Carmicheal on top, garnish with Ray Davies, serve on a dish made out of Memphis Soul, and be sure to invite Rickie Lee Jones to dinner.”

Influences:  “Everything I’ve ever heard. I’m as influenced by what I’m repelled by as what I’m attracted to.“

Why Steel Bridge? “pat mAcdonald. We met at several of Miles Copeland’s songwriting events in France in 1997.”