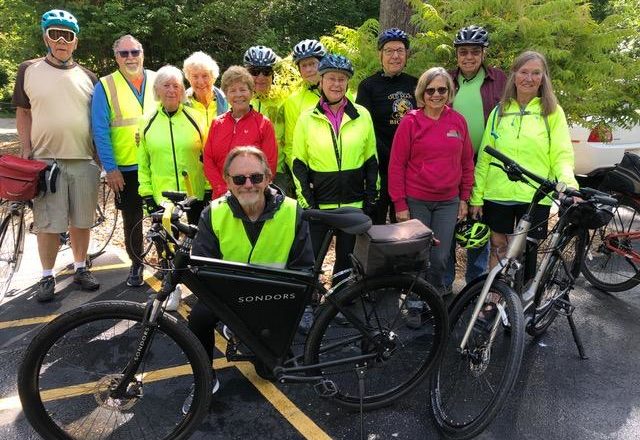 Still riding – with a little e-sist

There’s probably not another bicycle club in the country that got its start next to a pool at a YMCA, but that’s where Ann Lynaugh had the idea 22 years ago.

During her spare moments between lifeguarding and teaching swimming, she was trying to think of an activity that would entice older people outdoors to exercise and make friends. A poster she put up at the then-new Fish Creek Y drew 12 people to the first meeting.

The 10 or so members who began riding together in 1999 grew into the Backroads Bicycle Club (BBC), whose mailing list of 85 reaches well over 100 riders. From one ride a week and occasional parties, it’s grown to rides every Tuesday and Friday, early May until mid-October, that always end with lunch.

“We take care of one another, always stay close together, and everyone wears a helmet,” said member Ken Boyd.

Ken and his wife, Carol, have been active BBCers since 2002, and for many of those years, Carol has kept the group connected.

“The schedule for the 46 rides hasn’t changed much in recent years,” Carol said, “but occasionally we’ve dropped a route where traffic had increased or a hill had become too steep for some of our older riders.” Steep hills are no longer a problem, though, because now all but a few of the regular riders have switched to electric-assist bicycles, or e-bikes.

The rider still has to pedal, but the bike’s four assistance levels make a huge difference in how much effort must be exerted. Brian “Stretch” Merkle, owner of Nor Door Sport & Cyclery in Fish Creek and Sturgeon Bay, has sold e-bikes to most of the BBC members.

“They’re not a fad,” he said. “E-bikes level the playing field so people of all ages and ability can ride together in groups or pairs. You can still pedal and get a workout, but help’s there when you need it.”

Merkle said that Trek bikes with German-made Bosch control systems give riders 50% more power with the same effort using level 1, and climb up to 220% additional power through levels 2, 3 and 4.

“When I first got on my e-bike, I felt like I was 20 years younger!” Carol said.

“We had a leisurely ride along traffic-free, wildflower-bordered backroads,” Carol said, “and plenty of time to visit at Cornerstone afterward.”

One of the riders, Lynn Lees, said she believed she had finally mastered the e-bike she bought three years ago.

“It’s harder to make turns because it’s a lot heavier,” she said, “but at 82, with health issues, I need all the help I can get.”

Eight of the 12 riders that day were in their eighties, and the others were in their seventies. All but one had an e-bike. At age 88, Bob Brogan – the “senior” member of the BBC – was the first to get an e-bike and has logged 3,700 miles on it.

“We joined the group in 2005, and it keeps us going,” said Peggy Prindle, Brogan’s partner.

Meg Ziegelmann agreed, saying, “It’s body friendly – a lot easier on my knees and back than walking – and it’s motivating to be with a group.”

Dennis Zakry, a retired police officer from Milwaukee, said he’s having a lot of fun with the BBC, and what Nancy Dickson loves most is seeing Door County up close, smelling flowers and the woods, and seeing the animals. Judy Perkins and her husband, David Keen, are both retired attorneys who also love exercising on the beautiful backroads.

Jim Williamson, another octogenarian, and his wife, Betsy, head north from Sturgeon Bay for every ride and are among the few BBCers who are e-bike holdouts. After two strokes, Jim’s still riding the 30-year-old Cannondale on which he’s logged many thousands of miles. He pedals hard to keep up with the group, but he never lags.

A 2014 Peninsula Pulse story about the BBC cautioned readers not to mistake these “gray-haired folks for a bunch of geezers. They can probably ride circles around you!”

And seven years older, they can still ride circles around you – now twice as fast.

Regular rides will continue through Oct. 15, with four daylong adventures planned: the Washington Island Midsummer Ride on July 23, the Fox River Ride on Aug. 13, the Ahnapee Trail Ride on Sept. 17 and the Oct. 8 Washington Island Fall Color Ride. Email Carol Boyd at [email protected] to get information about the BBC and its ride schedule.