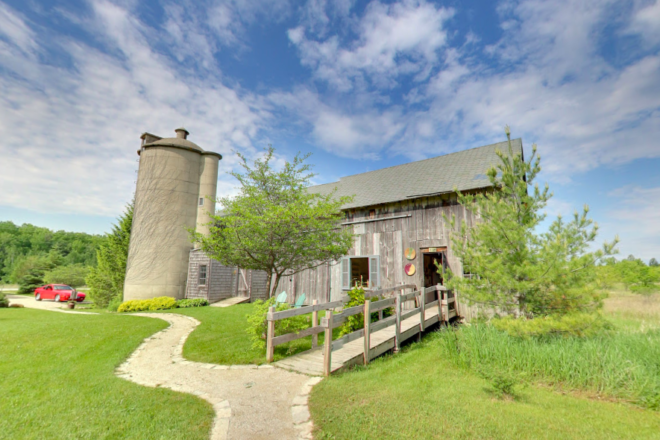 The Off the Wheel barn, as photographed by Brad Nault.

In 1996, Reneé Schwaller and her partner, Steve Beaudot, purchased a plot of land with several old farmstead buildings in Egg Harbor and intended to create a pottery gallery in the granary. They opened Off the Wheel Pottery in 1998, and as the business grew, they built a studio near the granary, then sectioned off a portion of the barn to house an expanded gallery.

“When we bought the property, they never gave us a date on the barn,” Schwaller said. “I went to the courthouse in Sturgeon Bay, but they said everything before 1900 was lost in a fire, so I’m assuming it’s from the 1890s.”

The barn is a bank barn, which means that a section of its foundation is exposed, and another section is built into the ground to provide two ground-level access points. They added an interior wall when they expanded the gallery, plus new windows and, recently, a new metal roof – along with foundation repairs to withstand the freezing and thawing of the ground each year – but otherwise, they’ve kept the rest as original as possible to retain the historic character.

“Everybody who visits comments on the buildings, how it’s a beautiful setting,” Schwaller said. “I’m so happy that we’ve been able to preserve them and that people are able to go in and appreciate them. Women look at the pots, and the men usually look at the barn!”

The barn was also used to host Reneé and Steve’s wedding reception in 1997.

“It was before barn weddings were popular,” Schwaller said. “They were definitely not a thing then!”