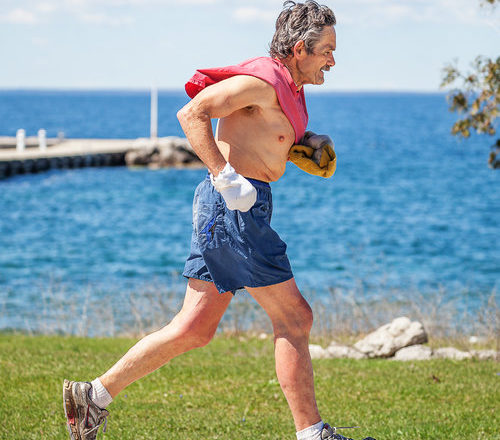 How often has exercising become a strain on your schedule or just another obligation to check off? For me, it happens more often than I’d like to admit, especially now that I live here in Door County, where running trails and quiet, curving cycling roads seem endless. Perhaps it’s too many years of training for a race – always trying to run faster or longer – that detract from the sheer joy that can come from getting out to run.

Luckily, I know the foolishness of this. Even when I’m sluggishly putting on my running shoes, I know with certainty that at the end of my run, I’ll feel great. No matter how long or short or fast or slow I run, the rush of raising my heart rate switches on the feel-good hormones, and I always feel better once I’ve finished.

If there’s one person who truly embodies this concept, it’s Barney, also known as Sister Bay’s “Running Man.” I haven’t met the legendary Barney yet, but I can guess that he feels that contentment after he runs his route of 3.89 miles through Sister Bay every day.

Barney – whose name is actually Steve Willems – is a Door County living legend, a familiar face to most in Sister Bay, and “the happiest, most grateful and content man you are likely to meet,” said Ashley Lusk, who organizes an annual run in Barney’s honor.

Barney has been cultivating gratitude and contentment through his daily runs of almost four miles for more than 40 years, and he has no plans to stop. He began his daily runs after he was in a car accident that left him with permanent nerve damage and a future that was forever altered. Running became an outlet: a way for him to overcome pain and depression. Today his commitment to run every day is still ironclad.

Barney’s story is an inspiration to all who know it, which is why Ashley Lusk began the annual Barney Fun Run in 2017. “I was talking to him one day at the (Sister Bay) Bowl and learned about his story and why he runs. I thought it was really inspirational, and [I] said to Rachel Willems [Steve’s niece], wouldn’t it be fun to get a group to do his route with him one day a year?”

With the help of Rachel and approval from Barney, the idea blossomed. The event has rallied 50 to 100 participants each year, and all profits go to a charity of Barney’s choice. In 2018, he chose the Gibraltar High School Booster Club – he is a Gibraltar alumnus.

“It is a community-focused event, and I love that Barney gets his moment in the spotlight,” said Lusk. “He really has fun running with everyone and enjoys the event.”

The group takes off to run the 3.89-mile route from the Sister Bay Bowl (or to complete the shorter run/walk of 1.84 miles) and then finishes at the Sister Bay Marina, where brave souls may join Barney in taking his traditional, post-run dip in Lake Michigan. Then the fun moves back to the Sister Bay Bowl for a round of celebratory drinks and socializing.

This year, the Barney Fun Run will begin at about 11:15 am on Saturday, April 27. There’s still time to join! Just show up at the Sister Bay Bowl – with running shoes and a smile of gratitude – by 10 am to register. The run is $25 per adult and $10 for those younger than 12.

It’s a fun run, but more than that, it’s a reminder to enjoy running for the simple joy it can bring. Barney’s motto is, “It’s a beautiful day every day,” and I’ll be reminding myself of that each time I lace up.