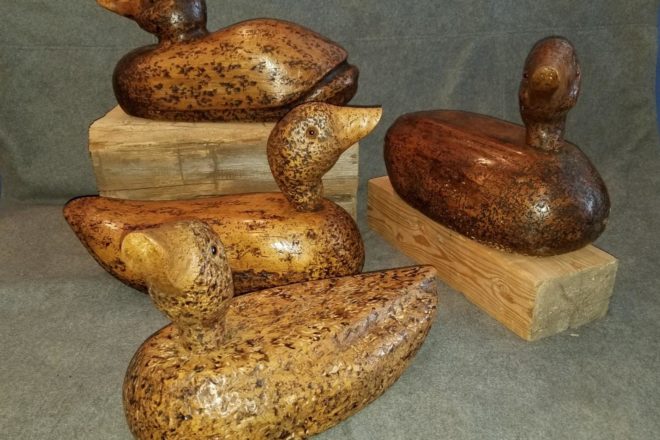 The Barnies are coming to Woodwalk Gallery. Submitted.

A new migration is headed to Door County

There’s a revival taking place on the peninsula: the ruins of Door County barns have begun taking flight as feathered folk art. After serving venerably as shelters from the storm, these rural Wisconsin relics are now enchanting and will endure as Boonducks.

Taking wing from Wisconsin’s rustic back roads, these caricatures are crafted from barn beams, cabin timbers, pier pilings and other vintage wood. Artist and author D.S. Sully transforms his whimsical “lumberquacks” through textured hammering and tinted bees-waxing, giving each hand-sculpted decoy a distinctive tactile quality of what once was and now is.

Sully likes to say it takes about 200 years to create each Boonduck. That’s because the elder trees from which the barn beams were hewn generally grew for a hundred years or more before being toppled. Then as barn supports for roofs, lofts and partitions, they held steady for another century or so. Now, reclaimed and redeemed, these old timbers live on with a sort of country charm.

In spring 2019, Sully’s Boonducks will debut as Door County Barnies at Woodwalk Gallery on County Road G in Egg Harbor. Sully had previously exhibited at Woodwalk and decided to create limited-edition Barnies after learning from gallery co-owner Jillaine Burton Seefeldt that her husband had recently dismantled and salvaged a local barn.

Collectors have coveted the artistry of duck decoys dating back to the early era of Native American traditions. Although many woodcarvers strive to make their decoys as lifelike as possible, Sully has taken a “Grandma Moses approach” to creating ducks that emphasize contour and character over lifelike detail, using the patina and intrinsic patterns of the weathered wood to leave individual marks of character on the ducks. He uses rasps and chisels to complete these expressive pieces, sculpting rather than carving them.

Wisconsin Public Television’s Wisconsin Life has featured Sully’s Boonducks, and they have been showcased in Madison, Minneapolis, Philadelphia, Louisville and Los Angeles.