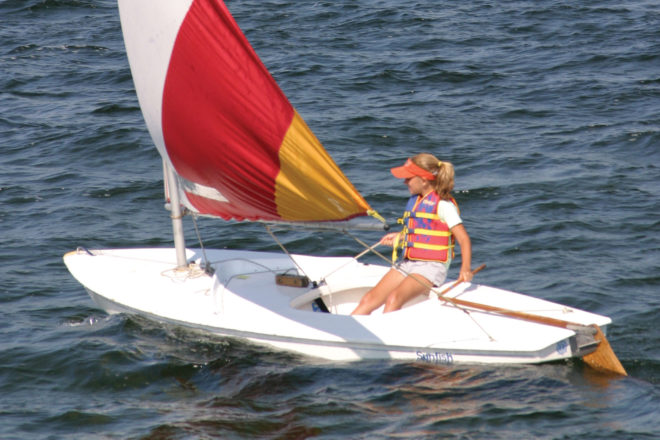 It was 9:00 in the morning and the couple I was scheduled to give a lesson to that day had just arrived. “Ready to sail?” I asked. With a familiar mixture of excitement and nervousness, they both nodded. I handed them life jackets, we boarded the 15-foot sailing dinghy, and within moments we were sailing out of Eagle Harbor’s shallow channel toward Green Bay.

As I had done with every lesson before, I began the lengthy process of explaining the parts of the boat and their uses. I would have only two hours with this couple, Ian and Laura, to impart a volume of information in hopes that they would not only become confident, self-sufficient sailors, but that they might also develop a passion for sailing similar to my own.

It wasn’t more than five minutes into the lesson, however, when I encountered a challenge: Ian was an anxious learner; he immediately wanted to sit at the helm and “get a feel” for what I was explaining. Laura was the opposite. Every muscle in her body was tense and as she looked at me with widened, pleading eyes I understood that fear was foremost on her mind. She began asking rapid-fire questions: Why is the boat leaning to one side? How is the wind pushing the sail? What’s that for? How do you expect me to learn how to do this in just two hours?

So there I was giving one sailing lesson to two very different students. Ian: head first, hands on, act now and ask questions later. Laura: cautious, cerebral, determined to get a handle on the whole picture before zooming in on one little piece, such as steering.

The challenge wasn’t exactly new to me. Most of my lessons, in fact, had been afflicted with the same scenario and trying to tailor the information to such different students often felt like trying to teach Spanish and French at the same time. But on this particular morning something clicked. The opposite approaches Ian and Laura took to learning the sport, I realized, symbolized what are really the two most basic and essential elements of sailing: on one hand, technical know-how and, on the other, a conceptual understanding of the physical principles at work. Because I had been sailing from an early age, these elements were intuitive for me. Seeing each piece as separate and in constant service of the other, though, garnered me a valuable tool – one that made me a more effective teacher for Ian and Laura’s sake and a better sailor for my own.

The Big Picture – A Conceptual Approach

So how does sailing work? On a conceptual level, it is useful to look at sailing as the sum of three primary parts: the boat, the wind, and the sail.

Boats themselves have no shortage of little parts, each with a special name and purpose, but a beginner really only needs to know the functions, if not the names, of some of the main ones: the mast, the boom, the main sail, the centerboard (or keel), the tiller, and the rudder. The mast, of course, is the tall vertical metal or wooden pole that supports the large, triangular main sail. The boom is the horizontal pole that runs along the bottom edge of the main sail and can swing 90؛ to either side of the boat. The centerboard extends below the bottom of the boat and provides leverage to keep the boat upright, and the tiller is the wooden stick at the back of the boat, attached to the rudder (a fin off the back of the boat which extends into the water), that allows steering. When sailing, the two parts a sailor will continually need to readjust are the tiller and the boom or, in other words, the parts that most directly control the boat’s position and the sail’s position.

Once the wind’s direction has been determined, the trick is knowing how your sail will harness the

wind’s power and transfer it into forward motion. The simplest way I’ve found to demonstrate how the sail works is by visualizing a large clock on the surface of the water. Suppose that the wind, wherever you are and at any point in time, will always come from the direction of 12:00. Let’s then say that you want to sail toward 6:00. While your boat would be pointed directly at 6:00, your main sail would need to be perpendicular to the direction of the wind, allowing it to simply push you forward. In sailing terminology, this is a “point of sail” called a “run.” See (1) on diagram.

Logically, this makes sense. If I hold a feather in my hand on a windless day and blow on it, it will float straight out several feet in front of me until the power of my air puff diminishes and it falls to the ground. Likewise, a puff of wind coming from 12:00 (or the air coming from my lungs) will push my sail in the opposite direction (like the feather floating away from me).

Now let’s say that you want to sail in the direction of 12:00, where the wind is coming from. In this situation no forward movement is ever possible. Pointing your boat at 11:00, 12:00, or 1:00, which is called “irons” or the “no-sail zone,” forces your sail to fly straight back like a flag or windsock would. The sail cannot capture any air, but instead flaps around and leaves the boat in an idle position. See (2) on diagram.

While the range between 11:00 and 1:00 does not permit forward sailing, sailing in the direction of roughly 2:00 (or at 45؛ to the wind, depending on the boat) can be a very fast point of sail. Logically, this is a little bit tougher to grasp at first. Being pushed as you sail toward 6:00 is easy to visualize, and not being able to sail at 12:00 since the wind is blowing from that direction is also fairly straightforward. So how is it that sailing at 2:00 (or oppositely at 10:00) is possible? Isn’t that still near enough to the direction of the wind to prohibit forward motion?

This is where “Bernoulli’s Effect,” a physics term which basically tells us that where fluid velocity is highest, pressure is lowest, comes into play. A sail can easily be compared to an airplane wing to demonstrate the idea. As an airplane rushes forward, its curved wing cuts through the air. Half of the air rushes over the top (curved) side of the wing and the other half rushes past the bottom (flat) side of the wing. Because the top of the wing is curved, the air above it must rush faster and cover more distance than the air underneath it in order to arrive at the back of the wing at the same time. As a result, the pressure of air in this stream is lower than the air around it. Like most things in nature, the low-pressured air in the stream wants to equalize with the air around it. The airplane wing, in effect, is then sucked or lifted straight up.

A sail is simply an airplane wing standing on end. As air rushes around the back side of the sail, its pressure is different than on the front side, thus permitting the sail to be sucked forward when the boat is pointed at 2:00. In sailing terminology, this point of sail is called “close-hauled” or “beating” into the wind. When close-hauled, the boom (attached to the main sail) will not be perpendicular to the wind, as it is on a run, but rather pulled into the center of the boat to allow the air to move over the sail on both sides. See (3) on diagram.

Once you understand these two most basic points of sail (upwind at 2:00 and downwind at 6:00), the rest falls into place much more easily. Consider that at any other point on the clock the boat and the sail will be positioned somewhere between these two extremes, thus allowing the wind to move over the sails and forward motion to take place. In Laura’s case, this de-mystification of what she was observing and sensing opened the door to the other aspects of sailing. Now all she needed was some hands on experience to go with the visual framework.

The Small Picture – Getting from Here to There

Ian’s task, unlike Laura’s, was slowing down to consider how his maneuvering affected the larger goal of putting all the pieces together. Before he could do that, however, he wanted to establish a comfort level with some tangibles – the tiller and the boom.

“Getting the feel” of the tiller comes quickly. The tiller and rudder are essentially one piece connected in the middle at a pivot point at the back edge of the boat. Pushing the tiller in one direction inside the boat forces the rudder to move in the opposite direction behind the boat. As a comparison, the rudder acts similar to a paddle when canoeing. If a person canoeing at a steady speed were to stop paddling and hold the paddle firmly on the back left side, the canoe would veer to the left and vice versa. The same principle holds true with a rudder. Steering feels counter-intuitive at first, since it’s the opposite of steering a car, but it’s an easy mental shift to make after a few minutes of trying.

Moving the boom allows a sailor to change the position of the main sail and can be done so using what’s called the “main sheet.” The main sheet (like all “sheets” on a boat) is simply a rope attached to the bottom of the boom that can be let out or taken in to achieve the desired position.

Once a beginner is familiar with steering and using the sheet to control the main sail, he or she is poised to begin the fundamental skill of changing a course. One such way to do this is by “tacking,” which means moving the boat from one side of the clock (say 2:00) over to the other (say 10:00) via the no-sail zone (12:00). During a tack, a sailor pushes the tiller far to one side of the boat. The boat then uses its stored momentum to pass through the no-sail zone until the wind catches the sail on the opposite side. After the sail and the boat have passed 12:00, the tiller is returned to a straight position, the sail is slightly adjusted, and forward motion resumes.

The other fundamental way to alter your course is by “jibing.” Jibing is similar to tacking, except that the nose of the boat will pass through 6:00, rather than 12:00. Again, the tiller must be moved to steer the boat to the new position and the wind will catch the sail on the opposite side.

Steering the boat, adjusting the sails, tacking, and jibing came easily to Ian; in no time at all he was able to turn his attention to the broader whys and hows of what he was doing. Laura was reluctant to maneuver at first, but once she trusted her comprehension of the concepts, she was visibly more confident. By the second hour, the two of them were even answering each other’s questions, making my role as a teacher considerably less challenging.

Attempting to sail, no doubt, can feel awkward or confusing at first, but most find that a little experimentation and practice shortens the learning curve. Once a solid foundation is in place, a sailor is then ready to take some of the other aspects of sailing, such as using multiple sails, rigging, racing, docking, rules of right-of-way, and fine-tuning. At all stages of learning, remembering to simplify the elements – as Ian and Laura were eventually able to do — is the most reliable means to success.