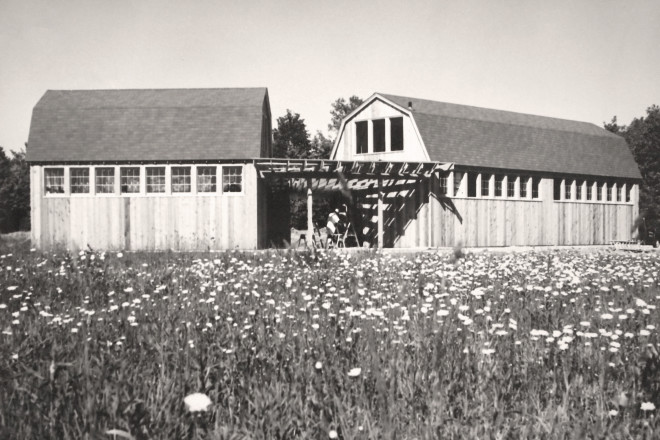 The first classrooms at Peninsula School of Art.

“The times they are a­changin,’” sang Bob Dylan in 1964, referring to the controversies surrounding Vietnam, civil rights, and even entertainment. More than one Volkswagen beetle sported the bumper sticker “Make love not war.”

During this maelstrom of social change, something exciting was happening in Fish Creek: the birth of an art school. What began as the dream of colorful artistic visionary Madeline Tourtelot is now celebrating its 50th anniversary. The Peninsula School of Art has become a Door County institution with a reputation that extends far beyond the peninsula it calls home.

An alternative educational movement was already taking place during that era, “especially relevant to art education,” explained Peninsula School of Art Executive Director Catherine Hoke. Students were “looking for a places outside the traditional setting for studying art.”

The school’s mission statement, to “provide enriching educational experiences to participants of all ages and abilities that broaden individual perspectives and foster a community dedicated to the transformational power of the visual arts,” is a direct response to that reality, as the school teaches art through workshops, exhibits and community programs. 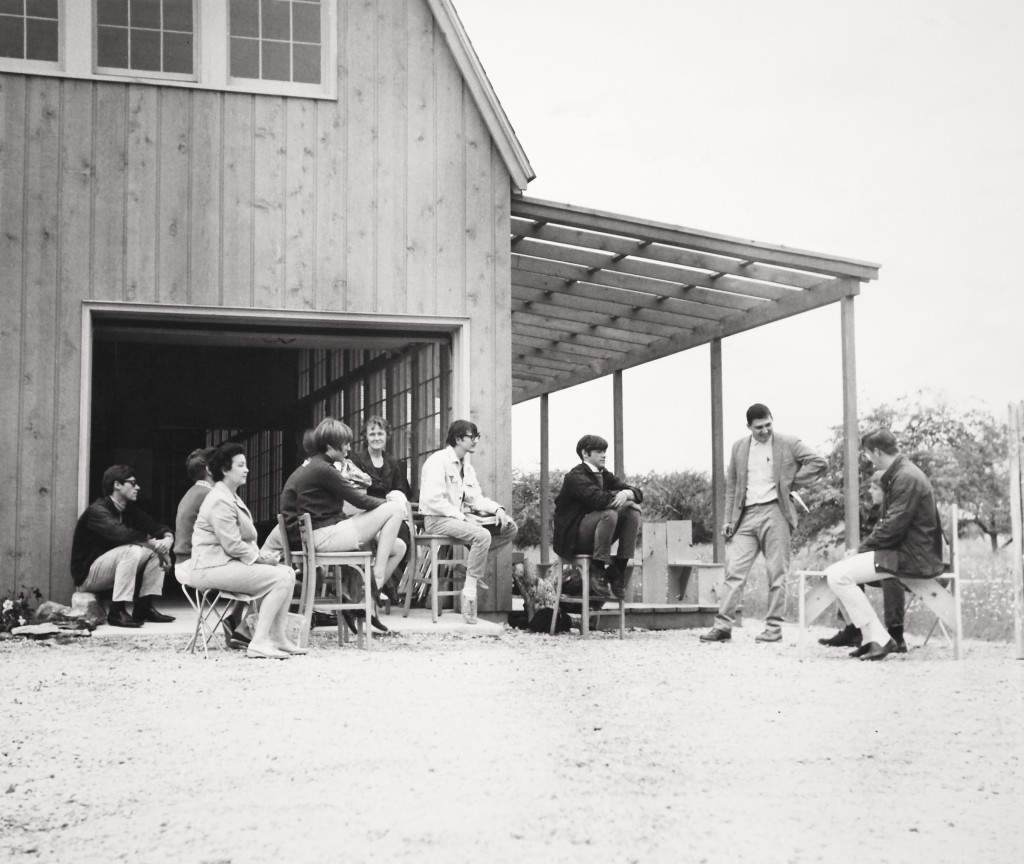 Located at the northern bend in Highway 42 in Fish Creek next to the Northern Door YMCA, the campus includes classroom and gallery space along with gardens and a gazebo. Kay McKinley, director of marketing and exhibitions, has organized a celebratory exhibit, “The Beat Goes On: The Happening of PenArt, 1965” that opens May 22.

McKinley’s intent is to “create the feeling of that time, not a timeline,” an undertaking that has involved a year of planning and taken her to the Madeline Tourtelot Archives at the art school, to NBC Learn (an online education subscription service), and to The Sousa Archives and Center for American Music at the University of Illinois at Urbana-Champaign. 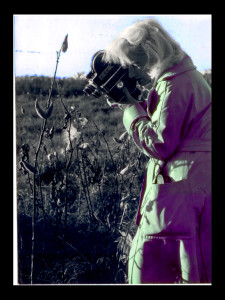 Modern technology will assist McKinley in her goal, with flat-screen televisions projecting NBC news footage from the 1960s of The Beatles, President Lyndon Johnson signing the Voting Rights Act, an interview with Martin Luther King Jr. following the march on Selma, the escalation of the troops in Vietnam, and the launch of a Titan rocket.

McKinley interviewed 14 people who were involved with the early history of the school and has created a composite video that brings together cultural elements that are not “an exhaustive representation” but give “a feeling of what is was like to be involved.” Enlarged images from the beginnings will hang in the gallery, along with reproductions of Tourtelot’s columns written for the Door County Advocate. One of Door County mixed­ media artist Skye Ciesla’s 10.5-­foot banners with Bob Dylan lyrics will add another dimension to the exhibit, as will a display of work by early artists at the school.

Technology has allowed the manipulation of vintage media for innovative effects. Tourtelot’s short art films, which have been digitized, will be projected from a concealed digital device while an actual vintage projector from the Tourtelot archives will offer the verisimilitude of historic authenticity. One of them, The Return of the Poet, was filmed in Door County and will feature recognizable landmarks.

Another film, Windsong, features Tourtelot as a dancer. The original 35 mm film has been converted to a video that “will be rear projected on a holographic type of screen,” McKinley explained, and feature an interview of Tourtelot discussing the production of the film with Chicago musician Harry Partch. 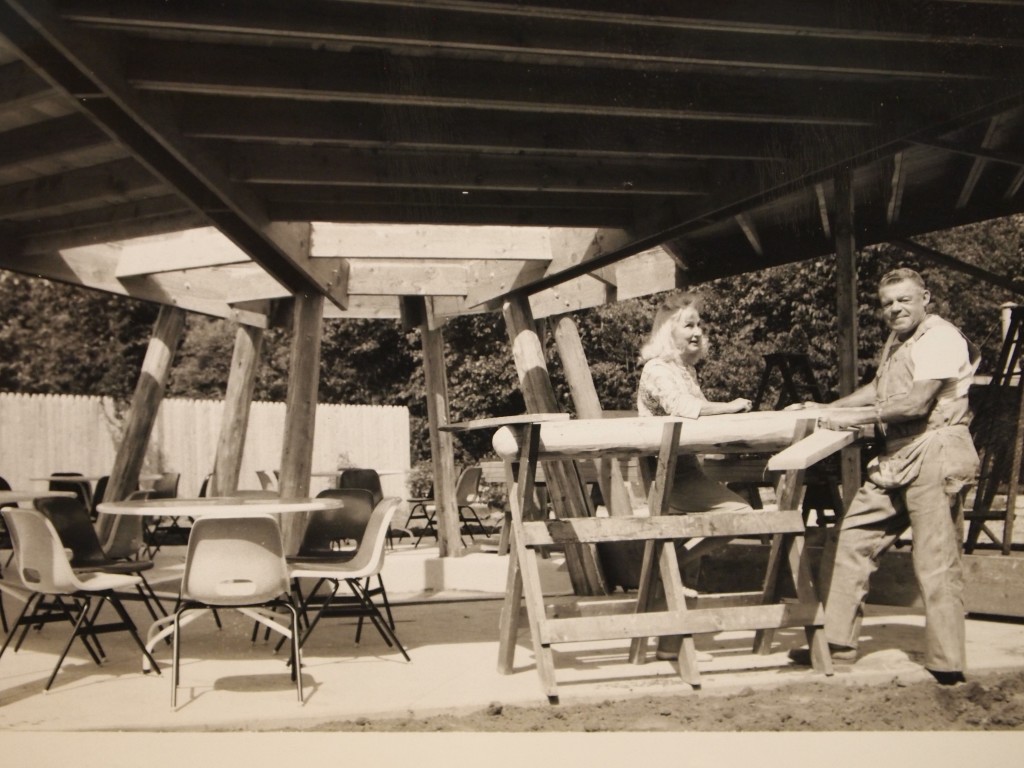 Madeline Tourtelot in the gazebo as it was under construction.

One of the problems that she encountered was learning that the interview had been audio rather than videotaped prior to the WTTW­TV Chicago public television airing of the film. Subsequently she had to layer the film projection with the recorded conversation.

Visitors to the exhibit will not only learn about the school’s history and the role played by Madeline Tourtelot, but may observe documentation of contemporary exercises in creativity that embrace the spirit of the school and its dedication toward promoting the arts in people of all ages.

“The Beat Goes On,” Hoke explained, is actually part two of a year-long celebration. “We Love Art; We Have a Dream” is part one of a program already in progress. The school’s monthly Family Art Days have also been focused on the 50-year anniversary, providing young people with copies of the artwork of artists of the 1960s such as Andy Warhol, Louise Nevelson and Mark Rothko to serve as inspirational models for the budding artists as they create work of their own.

“We feel fortunate to have the Peninsula School of Art just a few miles down the road from us,” said Nell Jarosh, who along with her husband JR now runs Edgewood Orchard Galleries. “It brings artists and art lovers to the community and adds to Door County’s reputation as an arts destination.” 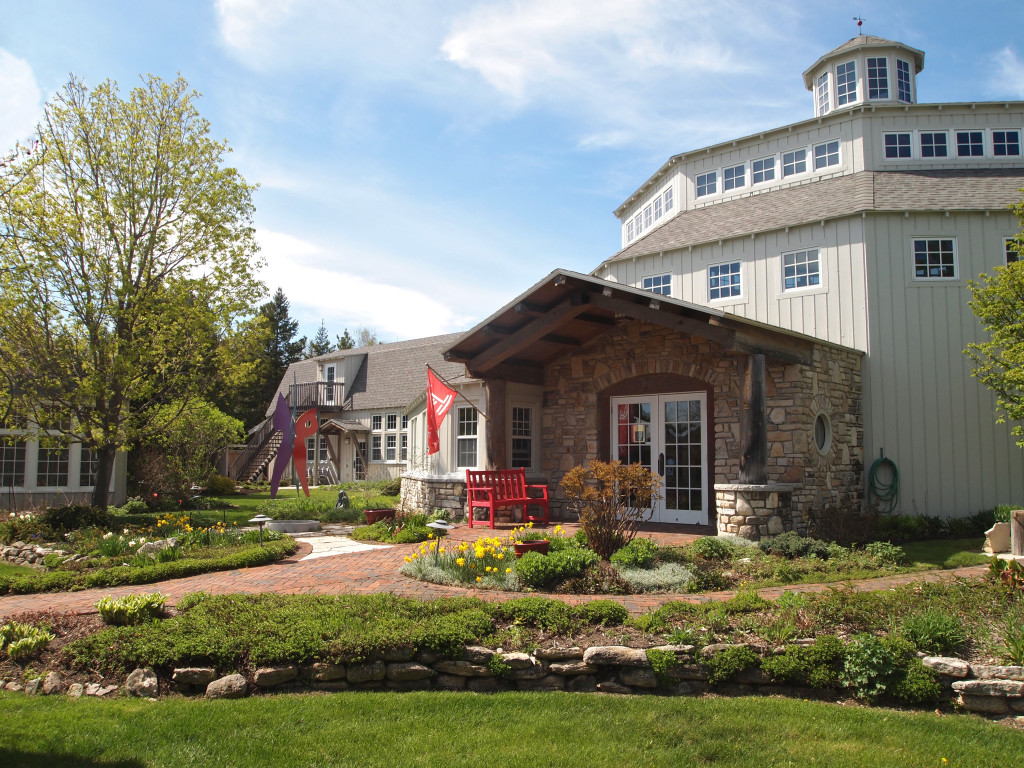 In addition, she points out the reciprocal arrangement that exists when artists exhibiting at her gallery sometimes teach at the art school and in turn bring their students on field trips to the gallery. From a personal perspective, she notes that the art school has great youth programming that not only benefits her twin daughters but all the children of Door County.

Hoke observed that while the mission has remained the same, the means of achieving it have shifted.

“The audience has grown significantly,” she pointed out, and subsequently “programming has expanded exponentially since we be began … What started as a six-week summer program has evolved into a year-round program of visual arts experiences for participants of all ages and ability. I am excited about new faculty and new programs,” she said, knowing that the beat will go on as long as people love art and have dreams.

“I took a drawing class at the art school when I was 13,” Door County artist Liz Maltman recalled. “We drew eggs. I was very shy, but I loved that class! The instructor took my mother aside and told her to be sure I kept doing art. What he said made my day!”

This was 1965, the first year of the art school, and she did make art, but practical art – making clothing and creating interior designs until, at age 50, she began taking classes at the Peninsula School of Art and for the past 10 years has worked not only as an artist, but an instructor there.

While her portraits and landscapes have won prizes, she is especially proud of the fact that she is invited to participate in the school’s plein air competition.

“I’m an outdoors-type person,” she said. “I like the changing conditions, the challenges. My favorite way to work.”

The art school has been a positive experience for her.

“I might not have been an artist without it,” she said.

Sculptor Bob Merline began his career teaching art at Gibraltar High School during the same era that Tourtelot began her fledgling art school across the street at its present location.

“When I first came to Door County, the art school was connected with the University of Wisconsin,” Merline said. “I took classes for credit and that’s how I got started on my MFA.”

One summer, he recalled, “she offered me a stipend to come to the school and work with other artists in residence.” Their assignment was to produce work for an end-of-season show for their own benefit.

Merline also taught at the art school. Money he earned, along with a recommendation that Tourtelot wrote, helped make his MFA a reality.

He remembers Tourtelot as “an extremely intelligent and vivacious woman, a very engaging person, always promoting and contributing to the arts of Door County in an open and non-judgmental way, accepting a broad range of artistic visions and styles.”

She was also a very social woman, he added, and “lived her life the way she wanted to live it.” In conservative Door County, “she was kind of a ‘wild woman,’” he joked, “but a well-meaning and generous lady.”

Potter Bruce Grimes was also an artist in residence and an instructor at the art school. For a time he was an art professor at University of Wisconsin – Green Bay. He has been a renaissance man in that his career has taken him to a number of universities and involved him not only in art, but both academic and athletic administration and even work with a nonprofit archeology center.

An artist at heart, “I have always taught at least one class,” he said, “and I always am doing my ceramics.”

He has fond memories of Tourtelot, “a patron of the arts,” he said, “bringing in young artists, encouraging them. She wanted people who were creative around her. She was a very social person. At parties at her house you got to meet national figures,” not only artists, he explained, but those in other areas of the arts.

“She loved Door County,” he said, “loved bringing the arts there, nurturing them. She was a very special person.”

“I met Madeline in 1968 when I moved to Door County to help my mom open Edgewood Orchard Galleries,” Anne Emerson recalled. “She was extremely encouraging and we had a long friendship that began that summer.”

The beginning of that relationship, however, was not without a bit of excitement.

“Madeline rented the barn that is now [Edgewood Orchard] gallery from my mother as space for the art school’s painting classes, and what had been the orchard caretaker’s house near the barn [now the Emerson’s home] as living space” for artists, she continued. Because this was the era of the ’60s, “it became something of a commune which brought a visit of [then] Sheriff ‘Baldy’ Bridenhagen and a phone call to my mom which pretty much ended that arrangement!”

But that dramatic episode led to the opening of Edgewood Orchard Galleries the next summer, she added, a family enterprise that is now in its third generation of management.

“Madeline hummed with creativity,” Emerson said. “The art school became a center and Madeline pulled everyone in – painters, poets, potters, filmmakers, photographers, sculptors, musicians and scientists. All ages were present as a number of faculty (many from UW – Green Bay and UW – Milwaukee) were there with their families.

“[My husband] Minnow and I learned so much during those times and met people who had a lasting influence on us. We’re grateful and happy the school continues to thrive!” 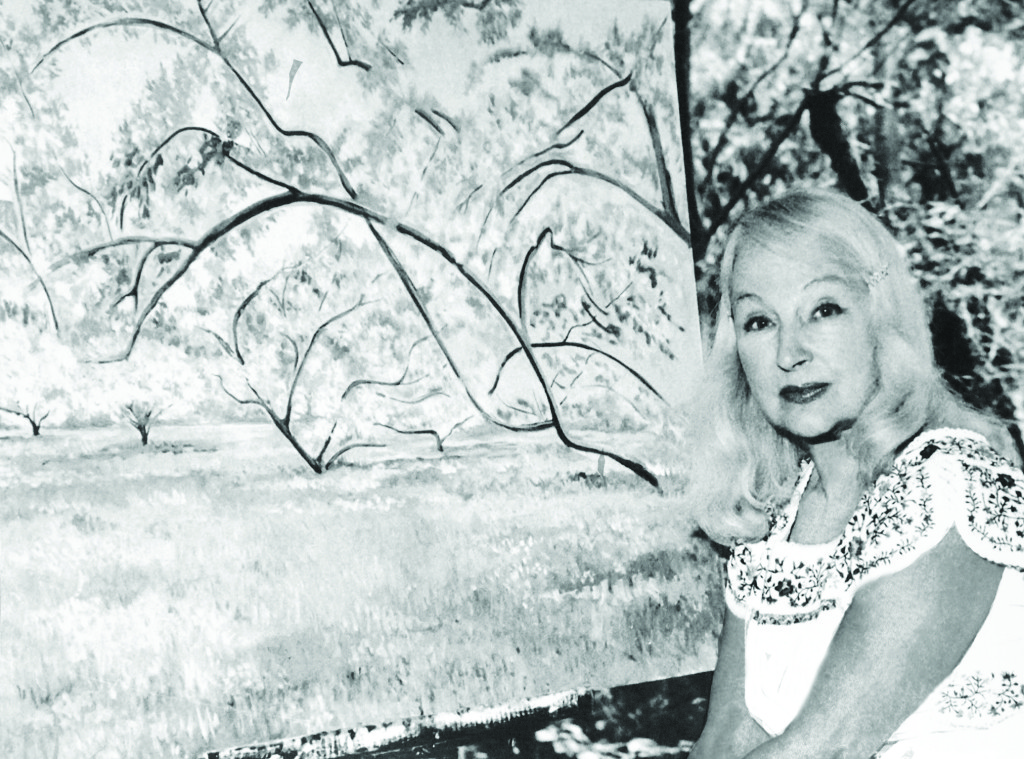 Madeline Tourtelot, the visionary behind Peninsula School of Art, was an eccentric figure.

Paul Burton’s new book Madeline Tourtelot . . . Remembered tells the history of the Peninsula Art School. In 1964 when Tourtelot was 50 years old, Burton said, she bought three-and-a-half acres of land at the northern end of Fish Creek, and with her architect husband constructed two building for what in 1965 became the Door Harbor School of the Arts, an artistically successful venture but one financially unviable.

Although the school closed in 1971, Tourtelot continued to support visiting artists. In 1978 she donated land and buildings to the Peninsula Arts Association that by 1980 re-established the school that has continued to be a focal point for art in Door County to the present.

Madeline Tourtelot “touched the lives of everyone with whom she interacted,” Burton stated. “With her platinum hair, careful dress and makeup, and her outgoing personality, she charmed us all, especially when driving through Ephraim in her Jaguar with the top down and the wind blowing her hair.”

Tourtelot led a reclusive life after her stroke in 1984, he added, died in 2002, and is buried in the Ephraim Moravian Cemetery with her husband.

Paul Burton’s book includes contributions by Virginia Jones Maher, Director of the Madeline Tourtelot Archives and Study Center at the Peninsula Art School, and is offered by Stonehill Publishing of Ephraim, 2015. It is available at the Peninsula Art School; all money collected from sales will be donated to the school and the archives/study center.