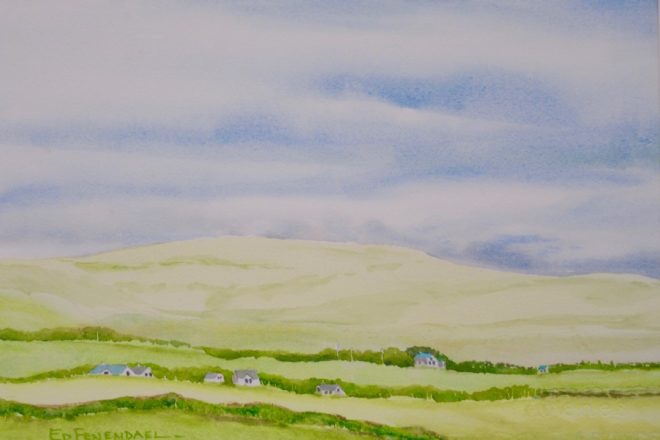 “The Burren” by Ed Fenendael.

Ed Fenendael, named one of the top 100 artists in the U.S. in the 1990s and Door County’s Master Artist of 2008, has spent so much time in Giverny, France, as a guest artist and teacher in Claude Monet’s famous garden that locals greet him on the street and invite him into their homes.

In January he paints in Mexico, and he’s also taken painting excursions to France, Romania, Turkey, Greece, Egypt, Italy and China – many with groups of students. But never to the British Isles until, on the way to Giverny for the sixth time, he and Frank Villigan – also an artist and Fenendael’s partner in the Inn at Windmill Farm near Baileys Harbor – were having breakfast in the Hotel Bonaparte in Paris.

They struck up a conversation with John and Patti Fox from Colorado, who had just purchased a second home in Ireland. “It’s a beautiful country,” they said. “You should take students there for a painting workshop.”

The friendship languished after a few emails, but then Patti wrote, “It’s time you organized that workshop in Ireland. We’ll find you a wonderful B&B near our home.”

A group of artists – Bonnie Sandstrom, Marcia Nickols and Mary Moster from Door County and Kathi Toombs and Trisha McLean from Kansas City – signed up to accompany Fenendael and Villigan on a weeklong workshop, followed by an optional, nine-day painting tour of the western part of Ireland.

Setting out in a VW van on April 24, they drove southeast from the Shannon Airport to Portumna in County Galway, just across the River Shannon from County Tipperary. As promised, Patti and John had reserved a week’s stay for the group at Cartron House, where hosts Ann and Timmie provided not only beds and the famous Irish breakfasts, but also lovely dinners and an indoor space to paint on rainy days.

Highlights of the week included:

• Thoor Ballylee, also known as Yeats’ Tower. The 16th-century structure was the summer home of poet William Butler Yeats from 1921 to 1929.

• Kilmacduagh, a ruined abbey near Gort in County Galway, reportedly founded by St. Colman in the seventh century

• The quaint villages of Woodford and Doolin

• A day in Inisheer, the smallest of the Aran Islands

• The Cliffs of Moher, rising 700 feet above the Atlantic

• The Burren, a barren, rocky area of hundreds of square miles on the southwestern coast. The area is described as desolate, but the painters found it enchanting under late-afternoon sun.

During the nine additional days of touring and painting, highlights included:

• The charming villages of Kenmare, Clonkeen, Cork, Kilkenny and Kinsale (which Fenendael was especially fond of)

• Rothe House and gardens in Kilkenny, a fine example of a Tudor dwelling linked to an influential family in medieval Ireland

• The Kilkenny Cathedral and tower

• The Powerscourt Gardens in County Wicklow

And then highlights in Dublin:

• St. Stephens Green, a vast park in the heart of the city

• Trinity College, especially the vast library and the Book of Kells

• The Museum of Archaeology

• A self-guided, seven-story tour of Guinness history (but not the factory) with a 360-degree view of Dublin from the top floor

Those who’ve been to Ireland and those who yearn to go can share a bit of what this group experienced at Celebrating Ireland, an open house on Aug. 1, 4-7 pm, at the Morning Mist Gallery in the century-old barn at Windmill Farm. The show will be up through August, open 10 am to 5 pm, Friday through Sunday.

Paintings that Fenendael and Villigan completed in Ireland and those they’ve done since returning to Door County will be on display, along with those of the five painters who took the trip. You can see Ireland through their eyes, hear their stories and sign up to receive information about the next painting/touring expedition abroad. Visitors may also enjoy refreshments and take a copy of the recipe for the wonderful brown bread that the group enjoyed at Cartron House.

To learn more about Morning Mist Studio at Windmill Farm – at 3829 Fairview Road, just west of County A in Baileys Harbor – call 920.868.9282 or visit WatercolorExcitement.com.