Mid-July into mid-August is a time when there are relatively few native flowers in bloom, while the alien weeds of the roadsides and fallow fields are at their colorful best. There is one unusual wildflower, however, coming into its glory at this time in some northeastern Wisconsin areas bordering Lake Michigan that lifts our spirits. It is the White Camass Lily, better known as the Death Camass Lily in various parts of the country where, if eaten by cattle, it can be quite deadly. 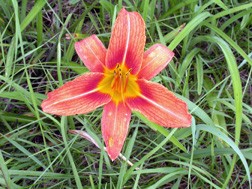 This is the orange, commonly seen and highly naturalized Day Lily.

Even its typical six-parted blossoms play tricks on visiting insects. The flower’s nectar has a stupefying effect on any tiny winged creature that overindulges in the liquid “treat,” as though the flower was advising the insect, “You can have a little bit – but not too much!”

My good friend and mentor of years ago, Dr. Albert Fuller, one of The Ridges Sanctuary’s founders, didn’t like the “death” description and called the plant “Wand Lily,” a fitting name that I also especially like. The tall, slender, somewhat top-heavy spikes of light-greenish flowers do have a very graceful movement in even the slightest early August breeze. Watch for it – you’ll be glad you did.

A lily, in the narrowest sense, is restricted to the genus Lilium. The lily family, however, is quite large and includes some of the Northern hemisphere’s most well-loved plants. Even some vegetables, such as onions and asparagus, are members of this great family. 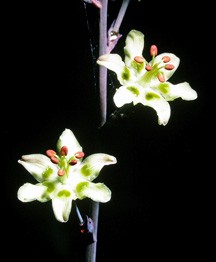 The early spring woods contain such old favorites as Bellwort, Leek, Trout Lily and several species of trilliums. Then in later succession come the Twisted Stalk, Canada Mayflower, Solomon’s Seal, Clintonia or Blue-bead Lily, and the brilliant Turk’s-cap and Wood Lilies. The spectacular, upright, orange Wood Lily that will soon be in dazzling bloom is fairly rare in Wisconsin. Eastern Door County is one of the few areas where it can be found. The orange-red, dark-spotted wildflower is named after the city of Philadelphia and is very indifferent to cultivation. By far the best specimens are found in a wild state where they should remain. We consider it to be a protected wildflower in spite of revised wildflower laws in Wisconsin.

Most people, upon seeing a Wood Lily for the first time, ask if it is a Tiger Lily. The answer is no. The Tiger Lily, Lilium tigrinum (ti-GRY-num), somewhat resembles the Wood Lily but has leaves that are not in a whorled arrangement around the stem as some of the upper leaves are on the Wood Lily.

The Turk’s-cap Lily, cousin to the Wood Lily, is a later flower of the meadow edges and fields. As a boy I often saw them growing along railroad right-of-ways. These orange blossoms have black spots, are taller and hang downward. The species we are most familiar with, even though very rare in Door County, is the Michigan Turk’s-cap Lily. 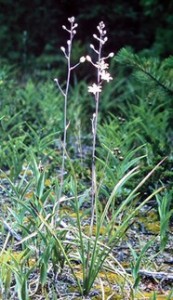 The Day Lily, introduced and naturalized from Eurasia, will soon be at its peak in northeastern Wisconsin and will be staging one of its most splendid shows we’ve ever seen. Its genus name, Hemerocalis (he-mer-o-Cal-is), means “day beauty” or “beautiful for a day.” Few garden flowers are as hardy and require as little protection.

The tawny orange Day Lily species that will soon be decorating many roadsides in large patches is very likely Lilium fulva. Its inner three segments have wavy margins. The clumps of fleshy tubers should be divided every few years for best results.

Another lily, the Madonna Lily, was given to us by Miss Emma Toft many years ago and was the center of interest in our rangelight residence garden before we moved away. It is the species candidum, meaning white, and is occasionally called the Common White Lily. In my estimation, there is nothing common about this immaculate and fragrant flower. Miss Emma kept several large gorgeous patches at her home in Baileys Harbor.

It was brought to this country many years ago from Eurasia. Historians tell us that it was cultivated there in gardens for more than 5,000 years. Surely it is one of the world’s most well-known symbols of purity and perhaps has the longest and best understood history of any flower. It was sacred in ancient times and was associated with the Virgin Mary during the early Christian era. 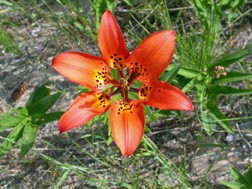 The Wood Lily has a striking deep orange color.

Quite a few lilies are typical hawk moth flowers when it comes to being pollinated. The Turk’s-cap Lily, for example, hangs downward, providing insect visitors with no perches. Nectar is secreted by nectar grooves at the base of the petals. In order to reach this delicacy, the moths make use of their long “tongues” and ability to hover in mid-air like hummingbirds.

Anthers on the flower, containing the pollen, swing loosely to and fro quite freely and are often brushed against by the hawk moths. Their pollen-laden bodies are bound to touch the rather long stigmas of other Turk’s-cap Lilies during the moths’ nighttime visits.

From the lowly onion-garlic-scented leeks of the April woods to the sprawling naturalized patches of Day Lilies now marking the sites of homesteads long disappeared from the landscape, lilies continue to be champions of innocence, purity and magnificence. In fact it would be difficult to imagine being any closer to paradise than when “in the beauty of the lilies” [from “Battle-Hymn of the Republic” by Julia Ward Howe].