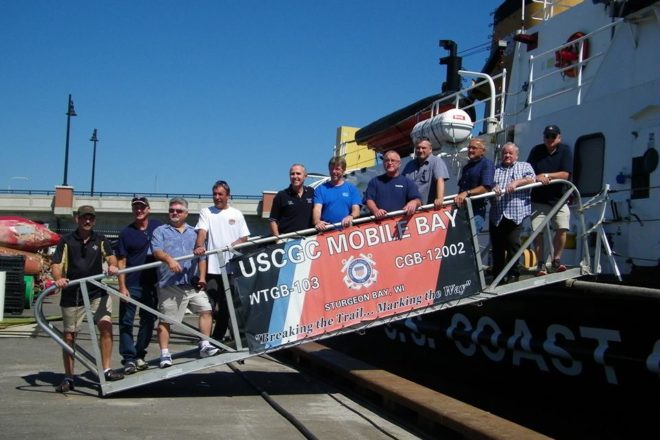 August 4 will mark the United States Coast Guard’s 229th birthday. The service’s mission creates a special need for a close bond between communities and the crews that serve within them. Although many cities have made significant efforts to support the Coast Guard’s work, only 26 cities nationwide have been officially designated by the U.S. Congress and Coast Guard commandant as Coast Guard Cities. The state of Wisconsin has only one – Sturgeon Bay – and this snippet from the city’s storied history might help to illustrate why it has been singled out for that prestigious distinction.

In 1979, a special relationship began between the original crew of the Coast Guard Cutter Mobile Bay and the city of Sturgeon Bay, located on a peninsula with more than 300 miles of coastline to patrol and protect. Forty years ago, Mobile Bay became the newest asset assigned to this region that, over the decades, has included lighthouses, lifeboat stations and various classes of cutters.

It’s unusual for a ship to serve its entire operational life in the same home port, but sometimes when things click, it’s better not to tinker with something that’s working. Such was the case with this community and this cutter. We know because we were privileged to be part of that first crew, and that’s why we still feel such a close bond with the good people of Sturgeon Bay.

Much has changed during the last four decades. Forty years ago, there was no GPS, internet or smartphones. Gasoline was 86¢ per gallon; interest rates hovered around 15.25 percent; and the Dow Jones Industrial Average was 838.

In 1979, Mobile Bay’s hull was white, and the hair on our heads was black. Today the opposite is true. Back then, most of our crew were single. Today most have married; many are fathers; and more than a few are grandfathers. But other things remain unchanged, not the least of which is the kinship we feel for Sturgeon Bay and the people of Door County.

If we could speak directly to the citizens who graced our lives back then, we would say that it’s hard to believe it’s been four decades since most of us lived within your borders. Yet, like the cliff swallows that return every year to the mission at San Juan Capistrano, we, too, return whenever the call to gather goes out. This year our reunion will coincide with Sturgeon Bay Maritime Week, Aug. 3-11.

In the grand scheme of things, we spent precious little time among you. But they were defining years, and for some, the most meaningful of our lives. It was during this period that many of us “came of age” and were introduced to lifelong friends. When we arrived, most were in our teens or early 20s. You welcomed us with open arms.

We were the recipients of your hospitable spirit, which made assimilating into your community effortless. You treated us like sons, always offering us your best. Nowhere was this more evident than when we recently realized that 25 percent of that first crew met their future wives during their tour of duty in Sturgeon Bay.

For those who were already married, no finer community could be found in which to raise a family. Your residents were friendly, your neighborhoods safe, and the opportunities to explore and grow boundless. Our crew always felt welcomed, whether it was worshipping with you in your churches, having our babies in your hospital or watching our children learn alongside yours in the local schools.

When not breaking ice to keep Great Lakes commerce flowing or conducting search-and-rescue operations, we simply lived among you. We ran in June Jubilee fun runs, entered teams in community sports leagues, volunteered with Special Olympics, hosted haunted “ghost ships” at Halloween and even participated in cultural activities such as the Door County Chamber Singers. It was a special time in a special place.

As it was for you, too, time turned the pages of our lives, and we soon found ourselves pursuing careers as diverse as our personalities. Upon completion of our service, we pursued law enforcement and academia, business and government, education and ministry. But even as we departed to write the ensuing chapters of our lives, what never left was the esteem we carried for the citizens who so warmly embraced us.

So, as we return to renew old ties and celebrate the past, we do so with great anticipation. Sturgeon Bay was an exceptional place to serve because of the variety of missions the Coast Guard is tasked with carrying out in this region. It was also an incredibly beautiful place to live and work. But more than anything, what made this tour of duty so memorable was your people: they set you apart then, and they continue to set you apart today, making you so worthy of your well-deserved honor as a Coast Guard City. Semper Paratus – Always Ready.