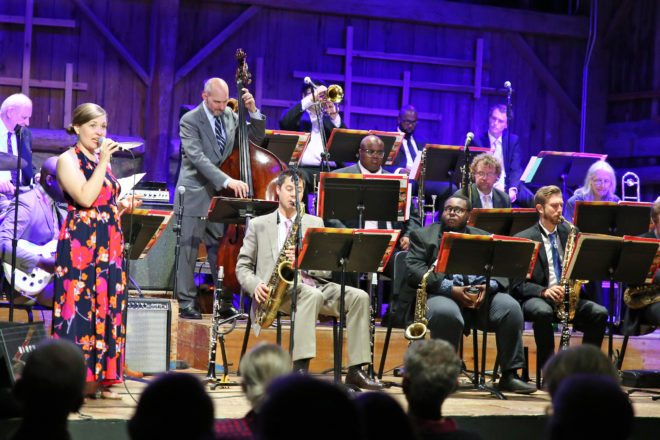 “A great bassist, composer and lyricist, she has an uncanny ability to mix traditions… following her voice is like reading a great novel.”

~ Jason Moran, Artistic Director for Jazz at the Kennedy Center

“She” is Katie Ernst, an accomplished professional musician, bass player and vocalist, recording artist and teacher, who has performed at the Chicago Jazz Festival, the Kennedy Center for the Performing Arts, the Hyde Park Jazz Festival and Rochester International Jazz Festival, among others. Ernst lives in Chicago and has been described by Chicago Reader as “one of the brightest lights on Chicago’s Jazz scene and she isn’t close to hitting her creative ceiling.”

But only 13 years ago, Katie was a 14-year-old girl in Naperville, Illinois who was about to graduate from junior high school. She had an interest in music and talked with her parents about the possibility of going to a music camp during the summer before she began her freshman year at Naperville North High School. They looked at a number of music camps and then heard about a place called Birch Creek in Door County. The choir director at Ernst’s school mentioned that her brother, Gil Wukitsch, was part of the Jazz faculty at Birch Creek and recommended the Ernsts look into it.

Ernst’s parents were already a bit anxious about sending their daughter to a two-week residential music academy at such a young age. They knew she would be among the youngest of the students attending the academy and, as Ernst’s mother said, “it looked kind of like camping, on a farm.” Ernst wanted to take the bold move and chose Birch Creek, knowing that it was the most intense and challenging of the music camps she was considering. It helped that she had received a scholarship from a parent’s organization at school.

Ernst describes herself that first summer at Birch Creek as “looking around, wide-eyed at how serious the young musicians were. I saw, for the first time, young people who were deeply into everything about music – recordings, artists, instruments, compositions, performances.” Ernst discovered there was a higher level of what a musician could be. She describes it as a turning point for her, when music went from extracurricular to something more meaningful. 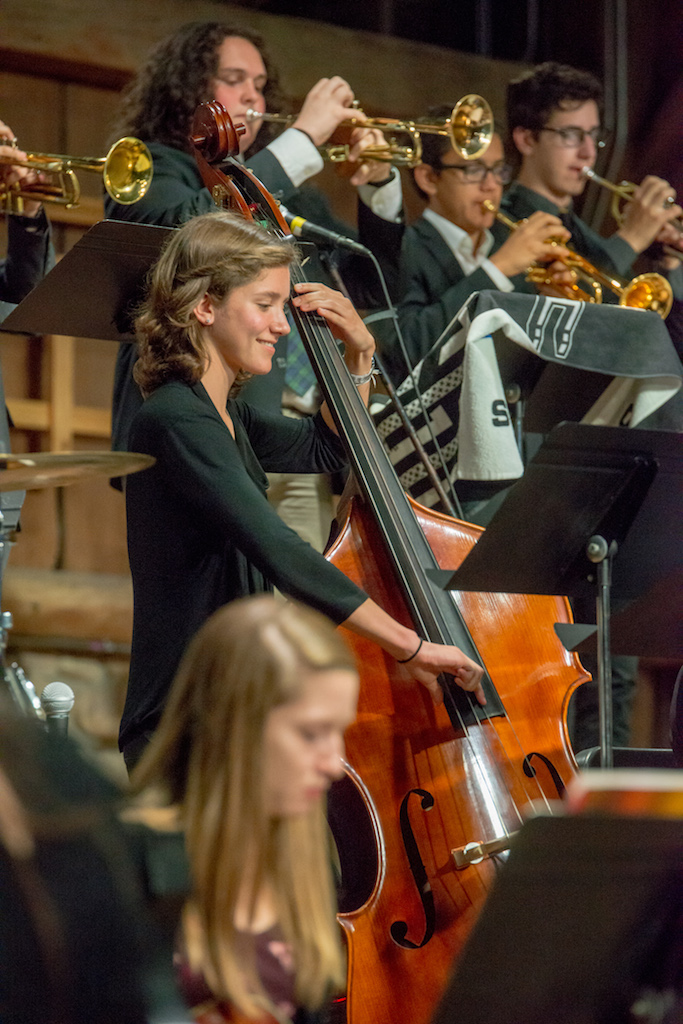 Birch Creek student and bass player Linnea Morris in concert with the Jazz I Studio Band. Photo by Heidi Hodges.

“I wasn’t a super-talented prodigy in junior high,” said Ernst. “Birch Creek is not just about kids who are already good. It’s for kids who are interested in music and have some talent. Birch Creek nurtures those kids to a higher level.”

Ernst’s time as a Birch Creek student is proof of the nurturing and mentoring that are hallmarks of the Birch Creek experience. She attended Birch Creek as a student for four years and “went up the ranks” each year as she grew in skill and confidence as a bass player. She played in every Jazz band, in progression each year, from the beginners Studio Band, to the intermediate Lab Band, and finishing with the elite small group known as The Ambassadors in her final year.

Birch Creek continued to influence her path by shaping her choice of what college to attend. She followed Jeff Campbell, Birch Creek’s Program Director for Jazz I and II, to the Eastman School of Music in Rochester, New York, where Campbell is the Chair of the Jazz Studies and Contemporary Media Department. During her four years at Eastman, Ernst returned to Birch Creek as a Teaching Assistant for several summers. She left Eastman with two degrees:  a bachelor’s degree of music in jazz studies and contemporary media and a bachelor’s degree of musical arts.

Ernst is now a full-time musician living and working in Chicago. She performs professionally with her group, Twin Talk, and as a side soloist with other artists, and has recorded CDs with her group and as a solo artist. She serves as Jazz Ensemble Director and Lecturer of Jazz Bass at Wheaton College and maintains a private studio for lessons with bass players and vocalists.

Ernst now shares this abundance of academic and real-world experience with future musicians as a faculty performer and teaching assistant at Birch Creek. When asked why she loves to return to Birch Creek each summer, Ernst sites the exceptional faculty who shaped her experience: “The return rate of the faculty is so strong and now I am teaching alongside people I first met when I was 14.”

She named many who influenced her and who continue to teach at Birch Creek, such as cellist Jeff Campbell, trumpeter Joey Tartell, trombonist Audrey Morrison and band director Jim Stombres. “I played in Jim’s bands for two years as a student and now I work alongside him as a teaching assistant,” said Ernst.

In this year’s class of Jazz I students, Linnea Morris, of Bay Port High School in Green Bay, was one of the students who benefited from Ernst’s teaching. Like Ernst, Morris is a bass player and a vocalist. She also was not sure about coming to a music academy before she arrived at Birch Creek. “My call to Birch Creek was somewhat last minute because of the need for a bass player. I’m going into my junior year as principal chair in my community orchestra and school orchestra, and thanks to this camp, I feel more prepared than ever.”

Morris was part of Ernst’s bass masterclass and also spent time in private lessons. For Ernst, it is the best possible continuation of her music career. “It is exciting to see the next wave of young bass players, as I saw working with Linnea,” said Ernst. “I got to tell Linnea all the things I wanted to know in high school. Having older role models who want to do what I do, reinforces the possibilities of what is out there for bass players.”

Ernst now has a hybrid role at Birch Creek. She is a Bass Teaching Assistant for the Academy students and is a crowd favorite among concertgoers as a Big Band Jazz vocalist. She was also the featured performer at Birch Creek’s Fall Fundraiser in October of 2017, “A Tribute to Ella Fitzgerald.” She will return to Birch Creek for the 2019 Valentine’s Concert on Feb. 16. As is the Birch Creek way, she will be joined in the performance by her mentors, Jeff Campbell and Ambassadors Director Marty Robinson. It all comes full circle at Birch Creek.

Birch Creek’s Fall Concert Series begins Saturday, Sept. 1 with Liam Teague, steel pan virtuoso performing with members of the Northern Illinois University Band. The series continues with “Bernstein at 100: His Jazz Roots” with The Larry Brown Band on Sept. 8; Lawrence University Jazz Quartet with José Encarnación and Dane Richeson on Sept. 15; the Associates Fall Fundraiser – “Body and Soul: The Best of Billie Holiday,” featuring Mardra and Reggie Thomas on Oct. 13; and “Christmas at Birch Creek” on Dec. 1. For tickets, go to birchcreek.org/tickets or call 920.868.3763.