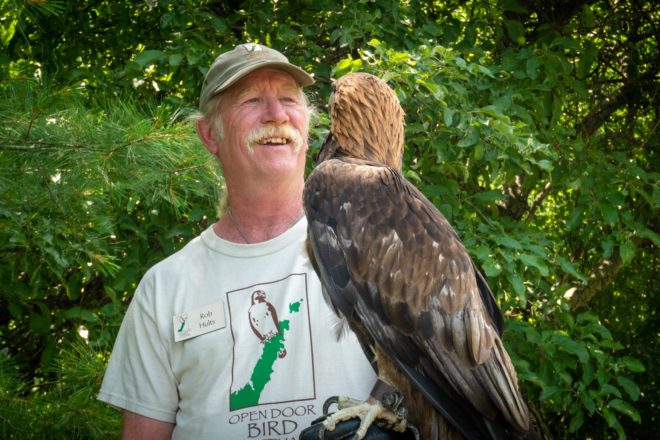 You may know the “birdman” of Baileys Harbor, but do you know the one in Jacksonport?

Jacksonport has become known for birds, but not the kind that Albert Zahn carved out of wood at Birds Park in the nearby Bird City of Baileys Harbor.

Past the winding gravel entrance off County Road I, the calls of owls, falcons, eagles, hawks and a turkey vulture greet visitors to Open Door Bird Sanctuary (ODBS): the forever home of 18 resident raptors that cannot be released into the wild.

A staff of volunteers moves about like worker bees as they clean out aviaries, wash mats, prepare food, mow trails, sell tickets and greet visitors — all with enthusiasm and laughter. Each member of this Raptor Team presents educational programming with a bird on her or his falconry glove, both at the sanctuary and at various pop-up events throughout Door County.

Behind the scenes of many nonprofit organizations, there is often a founder, an executive director and experts who keep things running smoothly. At ODBS, one man fills all three roles, and you’ll usually find him with a bird perched on his hand and a beaming smile stretched across his face. Rob Hults spends nearly every day at ODBS, running his dream come true.

“I was a teacher for 35 years, and I have learned so much from Rob,” volunteer Bill Bauernfeind said. “He’s like a bird whisperer.”

Hults grew up in Germantown, Wisconsin. After high school, he started apprenticing to be a home-remodeling contractor and was self-employed for most of his career. He always maintained an interest in nature as a hobby, volunteering at the Schlitz Audubon Nature Center in Bayside, near Milwaukee.

In 2006, Hults applied to volunteer for the center’s raptor program. Like other animals, birds must assimilate to the individual personality of their caretakers, and sometimes a bird prefers certain individuals or personalities over others. Instantly, Hults discovered a passion for and mutual connection with the birds.

“Having this inherent ability was really cool because the birds interacted with me well,” he said. “It was very rewarding.”

Discovering his natural aptitude and joy for working with birds of prey led Hults to an immersive workshop experience at World Bird Sanctuary in St. Louis. After a week of networking with people from nature centers around the Midwest and learning about different ways to work with birds, he had an epiphany.

“On the way home, driving back from St. Louis, I had a notepad next to me on the seat of the truck,” he said. “I started writing down a list of things that I would need to do in my life to be able to work with birds forever.”

At 46 years old, Hults did a 180-degree turn in his career: He set out to shift his résumé of home-remodeling experience into one that featured skills in raptor husbandry and training. There was no college major or crash course in all things avian, so Hults built up enough savings to be able to afford giving all of his time to interning.

First, he flew across the ocean. He’s a member of the International Association of Avian Trainers and Educators (IAATE) and had once toured the Irish Raptor Research Center, which is known for its grand bird show in northwest Ireland. Hults contacted the director in 2008, offering to volunteer his time in return for raptor-handling experience.

Within a matter of months, he found himself working as the center’s first intern, caring for and training more than 70 raptors. The center’s director had never let anyone else host the raptor show, much less fly the birds at the presentation’s pinnacle, but one rainy day during Hults’ internship when the director was particularly busy, he asked Hults to start the show’s introductions and said he would step in later to fly the birds himself.

“The rain cleared up, and the sun came out as I was finishing up all the introductory things we do with the visitors,” Hults said. “I kept looking at him [the director] and waiting for him to step in. He wanders over, and says, ‘Why don’t you do the show?’”

After three months as an intern, Hults stayed on as an employee through 2009. The center wanted Hults to relocate to Ireland, but family matters called him back to the United States.

During the next IAATE conference, Hults stumbled upon another yearlong interim position, this time at the Ohio Bird Sanctuary. Once again, he took on a temporary role for the executive director, doing everything from training and rehabilitating birds to scripting educational programs. When the interim position ended, Hults decided he’d take his ambition to the next level: start a sanctuary of his own.

First he gathered his avian connections near Milwaukee and established a board of directors. Then he developed some criteria for finding a sanctuary location: The property should be secluded, but not in the middle of nowhere. It should attract visitors from everywhere, but not the kind who’d prefer a trip to an amusement park over a hike through a state park. Hults wanted a place that supported environmentalism but could also generate enough revenue to function. And he’d need 20-40 acres — preferably a parcel of dry land that would shelter birds from mosquitoes.

In 2015, Hults received his first bird, a Eurasian eagle owl. Carrying on the tradition of the Irish Raptor Research Center, he used an old Irish word to name his inaugural resident: Aisling, meaning “dream.”

Hults’ dream of a sanctuary was becoming a reality, but he still needed some assistance to handle the birds. When he’d worked as a tile contractor, he met an employee named Amy at Carpet One Floor & Home. She had previously worked with animals, so Hults recruited her to rekindle her passion and help work with Aisling.

Their friendship grew and eventually blossomed into something more. Amy and Rob married right at ODBS, with Aisling as the “best bird.” And just as Amy had joined Rob in his Door County adventures, he joined her as well. They now own Amy’s family farm in Institute, where they grow organic blueberries and asparagus to sell at local markets and stores.

Amy plays a major role at ODBS by coordinating all the volunteers and overseeing bird care when Hults isn’t there, as well as doing bookkeeping and contributing her knowledge as a veterinary technician.

“When it comes to on-site stuff here, she is my right-hand person,” Hults said. “Even before she became a vet tech, if we had to do some intense husbandry with a bird, I wouldn’t do it unless Amy was here.”

Hults built their new home right next to the sanctuary property so he could live in a quiet setting, with just a short walk as a commute to work.

Hults plotted the layout of ODBS’s aviaries and care facilities, which he planned to construct himself. His master plan includes a visitor center and show area — sketches of which are available at opendoorbirdsanctuary.org/about/sanctuary — because ODBS has a dual mission of caring for birds and educating the public.

But he didn’t start with those. Hults said he has a “great sense of appreciation for growing within your own skin — not getting too big too fast.” That’s why he expands ODBS one resident and one aviary at a time.

Hults’ vision prioritizes what’s best for the birds and land stewardship. Preferring not to redesign what nature has already started or cut down any more trees than necessary, he plans construction in the property’s natural clearings and creates walking paths to connect the facilities.

“It’s enrichment for [the resident birds],” he said. “When there are other birds around and they’re seeing bunnies walk by, all of that kind of stuff is very positive for them.”

Next in the plans, Hults envisions a walk-through songbird aviary that’s comparable to a butterfly room. But before the sanctuary can expand further physically, Hults hopes to find more local board members and hire a second employee.