With plenty of snow covering the ground, you may say it’s too early to be thinking about nesting birds. Every time we drive down Hillside Road to the west we are invariably seeing a few of perhaps the earliest small songbirds to nest in Door County, the Horned Larks. Hardly a winter goes by without seeing several on our Christmas Bird Counts.

As long as they can find open areas in the fields, along with the shoulders of roads scraped clean by the snowplows, thereby exposing plenty of nutritious weed seeds, especially those of the Ragweed, the Horned Larks will do very well. My guess is that these birds may be the third or fourth earliest nesting birds in the region, the first being the Great Horned Owls that are already incubating eggs, plus Ravens and Crows.

As spring approaches you can expect to see small flocks of Snow Buntings and Lapland Longspurs, often in mixed groups, passing through the county on their way to their northern breeding grounds. A good field mark to look for, when the birds are in flight, are the black tails of the Lapland Longspurs. The predominantly black and white birds (more white than black) are the Snow Buntings.

It rarely fails to occur that someone will soon be reporting the “first” Robin of the spring. Invariably it turns out to be one that spent the entire winter here. As long as they can find enough wild berries they’ll survive the cold and snow very nicely. One of their favorite “emergency” foods is the fruit of the Highbush Cranberry shrubs. 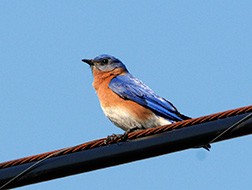 Eastern Bluebirds like to perch on wires because they are always looking for their food on the ground.

Study your lists of early bird arrivals in past years and I predict that, included will be the Eastern Bluebird, Robin, Red-winged Blackbird, Eastern Meadowlark and the Common Grackle. Bear in mind that all of these species are capable of withstanding our winters so long as they can find food. However, it’s quite uncommon for them to do so.

A good suggestion is for you to do some reviewing of the birds which will be seen during the next few months, either arriving to eventually nest, or simply passing through on their way to northern breeding grounds.

Now is a good time to cruise some country roads and scan the adjacent open fields for Rough-legged Hawks. Since there are no perching sites in the open expanses of fields for these raptors to use in searching for prey, they simply hover in one place high above the fields, like treading water, in order to locate their next meal.

An interesting feature of these large hawks is their small feet, ideal for catching tiny victims such as field mice. Ordinarily a large hawk like this would more likely have corresponding large feet.

How I cherish an experience that happened during the late 1950s on a mid-April morning near Plainfield, Wis. I was crouched in a blind studying and taking notes on some Prairie Chickens, a part of the great ongoing Hamerstrom Study. The sun was just showing itself on the horizon, the air frosty cold, and there wasn’t a cloud in the sky.

Out of nowhere a Horned Lark flew in and landed on a clod of ground within six feet of my blind. Here, faced toward the rising sun, this little creature let loose with an indescribably beautiful aria, an early dawn concert that lasted for about 10 minutes.

As I listened intently I could hear others performing the same song off in the distance. Undoubtedly each of those males was going through the daily ritual of their breeding season – restaking his claim to so many acres and announcing it to all his Horned Lark neighbors.

Charlotte and I have kept and filed lists for many years of the arrival dates of birds returning to nest in our region. For us, this helps make life more interesting. It was during the 25 years that I trapped and banded wild songbirds that I was able to come up with some interesting observations regarding migration and especially pair-bonding.

One wonders about the pair bonds of various species of birds and for how long the birds remain as pairs. In spite of the long drumming display period of the Ruffed Grouse, it is thought that the actual pair bond is for an extremely short duration, only for copulation. Even that of the Ruby-throated Hummingbird is considered to be at most a few days in length at the time of copulation. When that is accomplished they go their separate ways. The female does all the nest-building, incubating, feeding and caring of the young. 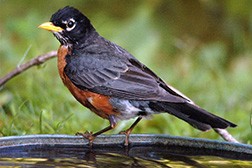 Robins are one of the most common nesters in yards and around our homes.

Most perching songbirds (passerines) however will retain their pair bonds throughout the breeding season. This includes other species such as Sandpipers and Killdeers. Studies reveal that some will remain paired for several years. A pair of Cardinals, for example, was found to remain together for three years.

Then there are those species that mate for life, birds such as Sandhill Cranes, Canada Geese and Tundra Swans. Even some of the smaller birds, such as some Crows, Herring Gulls, Brown Creepers and White-breasted Nuthatches are thought to mate for life. An extremely interesting book on the subject is by Margaret M. Nice, The Watchers at the Nest (A Classic Personal Study of Bird Territory and Mating.)

I’ll suggest that you spend more time this spring observing and taking notes on the activities of the Horned lark, Eastern Bluebird, American Robin, Red-winged Blackbird, Eastern Meadowlark and the Common Grackle. Prepare yourself for learning many new and fascinating things about these otherwise fairly abundant and commonly seen birds.

Some, including the American Robin and Common Grackle, will be quite easily studied in your own front yard. The others, such as the Horned Lark, Eastern Bluebird, Red-winged Blackbird and Eastern Meadowlark, will be most easily observed in the more open countryside.

I am concerned about many young people of today, caught up in the “Computer Age,” their eyes “glued” to yet another cell phone or screen. I look at these electronic marvels, including the TV and computer, as dangerous distractions luring the present generation farther and farther away from nature, the life-giving soil and its inhabitants, the fields and woods and their marvelous creatures.

I’m afraid that, unless they have broadminded, strong, caring teachers not only will they fail to learn about nature, they won’t care about it either. Please, take a child by the hand and explore our natural world!