My respect and admiration for the tiny Black-capped Chickadee grew by leaps and bounds the minute I held my first live and spit-fighting mad one in my hand. It was during the fall of 1958, and I was learning the art and intricacies of handling wild songbirds and banding them from Ed Peartree, the highly respected master and veteran bird bander from Oconomowoc, as I hoped to become a federally licensed bird bander.

Following several early morning sessions with Ed, the time finally arrived when he said, “Well, Roy, it’s time for you to remove your first bird from the mist net [used to capture the birds].” 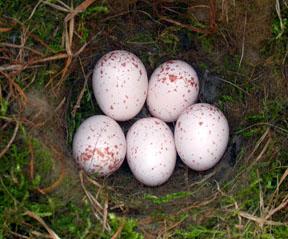 The bird turned out to be a Black-capped Chickadee, simple to handle, or so I thought! I can vividly remember the sly smirky smile that came across Ed’s face as I began to extract the thoroughly tangled little bird, clutching the several thin strands of nylon with every ounce of strength it possessed – surely Ed knew what an initiation in handling wild birds I was about to receive!

You can’t imagine the rapid-fire force with which that Chickadee banged and pecked away at my fingertips with its sharp pointed beak as I tried to remove it from the net. I wouldn’t dare repeat all I said to that feisty little spitfire of a bird before I finally held it in my hand, ready to attach a numbered aluminum band to one of its legs. Yes, it took plenty of practice to learn how to correctly handle the various bird species I captured during the 25 years I banded songbirds for the U.S. Fish and Wildlife Service. Grosbeaks were among the hardest of the biters, but I still maintain that the several hundred Chickadees I banded over the years, ounce for ounce, had the most rebellious spunk and fight in them.

Chickadees are cavity-nesters and the first nest of a pair I came across in the late 1950s was only around a foot and a half above the ground in a very rotten stump. The several nests I located in the Ridges Sanctuary when I worked there were around six or seven feet above the ground, also in very punky decayed dead tree snags, usually either pine or cedar. They are also known to use abandoned woodpecker cavities and occasionally bird houses.

Finally, in June of 2006, one of our Bluebird K-style nest boxes along the west border of our field had Chickadees nesting in it. What amazed us was the large clutch of nine eggs that female laid there, and all eventually fledged very nicely.

Recently, what may turn out to be a record-setting chickadee-nesting event began in one of our K-style bluebird boxes along Fairview Road near our home. By April 11 a Bluebird nest had been completed and by April 25 the nest held five warm eggs in the process of being incubated. Much to Charlotte’s chagrin upon checking that nestbox on May 2, a brand new Bluebird nest had been built right over the five eggs. 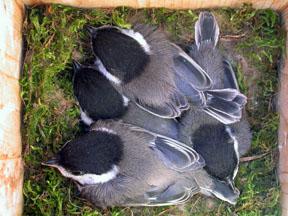 By May 15 there were four bluebird eggs in the box and by the 30th of the month they had hatched. The four young birds fledged (left the box) by June 16. Charlotte cleaned out the used nest on June 20 and the box remained empty until July 3 when House Wren twigs were beginning to fill it up. On July 10 Charlotte cleaned out the Wren twigs again and by July 17 a neat layer of moss had been placed on the bottom of the box, a sure sign of the work of a Chickadee. Naturally the moss was left in place.

Upon checking the box on July 24 it appeared as though the moss remained in the same condition. It was on August 1 that a neat nest cup in the green moss and five warm chickadee eggs were found in the box. During the short time Charlotte examined the nest the hen Chickadee scolded us non-stop from a nearby bush. In checking the progress in the nest on August 7 the eggs were still being incubated and a week later, August 13, four of the five eggs had hatched. Those very tiny naked little babies weren’t much bigger than large bumblebees, or so it appeared.

I started our photographic record by capturing digital images of the eggs. Their whitish shells were smooth, had little or no gloss, and were quite uniformly spotted and dotted with reddish-brown, more at the larger ends. Every three days I photographed the nest of young that, according to past state records, will very likely fledge around 16 days after hatching. We are estimating their fledging date will be around August 28. If they do successfully fledge, and we are very confident they will, this will be a new Wisconsin record for late Black-capped Chickadee nesting.

According to Sam Robbin’s excellent book, Wisconsin Birdlife, published by the University of Wisconsin Press, many years of observing the nesting of Black-capped chickadees in the state shows that they have nests with eggs during the period of May 2 through July 8. Even though Chickadees generally are considered to be single-brooded, nests with eggs in late July and into early August indicate that a small number may have second broods. Their clutch size is usually seven, occasionally four to nine, and the eggs measure 7/16 inch by 9/16 inch. 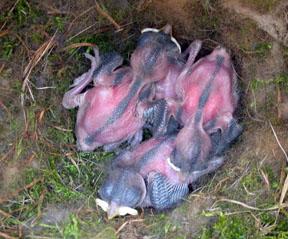 The chickadees ten days later at age eleven days. Note the inside box size is 4 by 4 inches.

I will be anxious to examine the nest once the young have fledged. Materials used in lining the beautiful mossy nest may include wool, hair, fur, moss, feathers, insect cocoons and cottony fibers. Several years ago in late May I watched a Chickadee gather big mouthfuls of White-tailed Deer hair, pulled from a dead carcass, which it was using to line its nest.

When I consider the tiny size of the Chickadee eggs, the precious little naked bodies huddled together, and just 10 days later the amazingly fast development of the eye-opening and feathering of the nestlings, soon to be on the wing, the more respect I have for our great Creator.

Update: The black-capped chickadee babies became fledglings and left the nest Aug. 26, at 14 days after hatching. This has been truly wonderful to watch and witness!