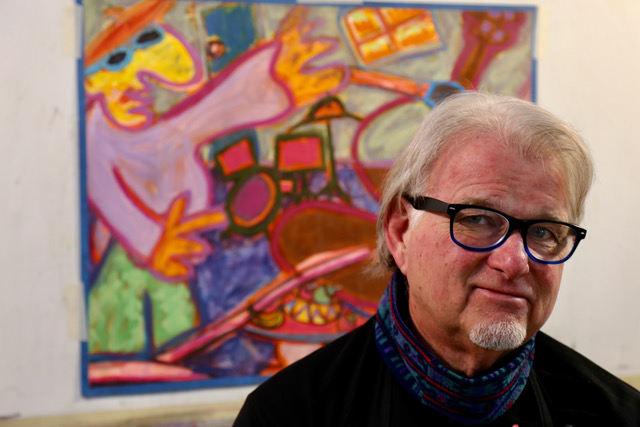 Mike Judy says his artist statement when he does a new show is pretty simple: “I want my art to make people feel happy, healthy and smart.”

His pastel paintings are bold, usually brightly colored, and often, but not always, uncomplicated images of sailboats, grinning cats, cheerful fish, faces, imaginatively hued musicians and highly stylized women, often with bright-red, heart-shaped lipstick across the lines of their lips.

Judy’s art coexists with music. He plays guitar and has appeared around Door County with his wife, April Pate, in a duo called Spike and April, performing only outdoors since the pandemic began. His twin passions trace back to his education, when he studied studio arts and music theory and composition at Ohio State University and North Texas State University.

“That’s where the energy was for me, you know. Those were the passions,” said Judy, who has work in several galleries and private collections and earned awards in both fields. This year, he received a Wisconsin Area Music Industry award for his time playing with the band Semi Twang during the 1980s.

This winter – his third back in Door County after living in the Twin Cities for years – Judy’s focus is clearing his head, enjoying solitude in his studio above Bay Shore Drive south of Egg Harbor and figuring out how he wants to paint.

“Happy: That’s the general idea,” he said. “Staying happy has been a challenge with COVID and the four years of the previous president. I feel kind of beat up as far as being a practicing positive, happy person, but I am hanging in there.”

But clearing his mind doesn’t mean forgetting his previous work. Judy recently painted the head of a woman with bright lipstick, much like images he created years ago. He framed this one with a vase of poppies, added a sailboat in the background and made her share the space with a man smoking a drooping cigar.

He also has other paintings of people, many of them of musicians playing in jazz clubs. Those tend to involve more complex images and display his imaginative use of color.

“Not so many people know I also work a little darker, a little weirder, often in dark city scenes with jazz musicians, guys wearing little hats with dark colors playing music and smoking cigars,” he said. “So I thought I’d just smash these two things together.”

Judy has a number of small paintings spread out on a table.

“They’re really fun,” he said. “They helped me loosen up and get back to the kind of energy that I want in my art.”

He tends to find inspiration and images from inside himself rather than from something outside, like the view from his studio window.

“I just literally come in here, and I put a piece of paper up, and I think in my mind, what tickles my fancy, what tickles my imagination, what would be fun to do,” Judy said. “And so I do a pencil drawing. Sometimes I don’t, and just work out these images that are rolling around my head.”

Recently, he’s been working on larger pieces that he’s constructing with the help of Google Earth. He uses it to pick a spot – Italy or Egypt or anywhere in the world, really. Then he suggests local vegetation and typical building types before zooming off to a new spot and repeating the exercise.

“Then I make a composition and jam them together,” Judy said. “There’s no way they could exist together. That was a really fun thing to do.”

Odd juxtapositions are not atypical in his work. A favorite is “Francis and the Fishermen,” in which a horn player in a jacket and tie is playing, apparently on a fishing boat, as men behind him haul in nets while a lighthouse and buildings occupy the shoreline across dark-blue waters.

The new work goes slower than Judy is used to working – he might work on one painting for a month. They are 18 by 23 inches on Sennelier La Carte Pastel Card, which has a surface of finely ground cork and vegetable flakes that hold pastel.

They are intriguing: city lights at night, a dark image of an Italian sports car, a weirdly illuminated tree and what he calls his “Dior woman,” taken from a style magazine, all together in a single painting. Another combines cherry blossoms with images of Giza, including pyramids and a camel.

When Judy first came to Door County, he worked for almost 10 years at The Paint Box Gallery in Ephraim and met many of the artists in Northern Door because the gallery did their framing.

“I am so impressed by the really great painters, like Craig Blietz,” he said. “He just blows me away. Or Chick Peterson.”

Judy’s work is available at mikejudyart.com.