How writers come to be I’m not sure we know. To wonder if in the age of Google and Kindle the sense of book that has been with us for the last 500 years is about to be eclipsed.

I am a child of the library, fondly to remember the libraries of my grandparents. In both cases, farm folk in the traditional guise; that farmhouse, that wood-fired kitchen range, roll linoleum flooring, spectacular overstuffed chairs. In the time before snack foods, the sheet metal popper was deployed on Saturday night in both delight and ampleness.

There were other well-known farm amenities – the bread board, the oatmeal pot. My grandfather had a jack pump attachment to his kitchen for what he called “drinking water.” Despite his house having plumbing and eventually indoor … at the end of the kitchen sink was an old fashioned jack pump. When he wanted “good water,” he went to that hand pump and lifted a gallon at earth temperature. Seems my grandfather was a connoisseur of waters. 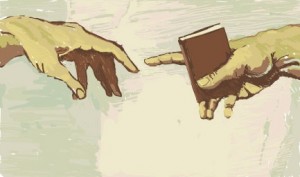 In the morning preparing his breakfast he charged his coffee pot with earth-fresh water. Breakfast at grandfather’s house was the exalted meal of the day. Breakfast lingered, it loitered, breakfast procrastinated to mid-morning. Breakfast had multiple courses starting with an initial serving of oatmeal with maple syrup or brown sugar over which he poured clotted cream. Oatmeal isn’t very pretty to look at – clotted cream makes it resemble mass murder. I never learned to enjoy clotted cream, part dairy product, part chimney mortar.

I believe my grandfather had a method of cooking pine boards and burdock, not to neglect skunk cabbage, served with eggs stirred in with ample cheese. He read his newspaper at breakfast, read his Bible, read Shakespeare at breakfast.

When I took Shakespeare in college, I followed his example of taking the morning class in the hope that tragedy would be moderated by the morning hour. My grandfather did not think reading bad news or issue-rich politics should come before bed as it ruins the night’s sleep. I did do one grade better in the morning Shakespeare against afternoon Shakespeare despite that was comedy.

My grandfather’s library was in the same room as grandmother’s sewing machine. The machine faced the south window, the east and west walls were solid books, floor to ceiling, solid books. In it were several editions of encyclopedias … I remember that thrill of extracting any volume at random, turning to a page, also at random, and descending into the depths of any subject. In that library was his Coleridge, his Dickens, his Tarzan of the Apes, his Roughing It, Augustine’s City of God, Two Years before the Mast, the memoir of Ulysses S. Grant, and Shakespeare. I believe my grandfather’s library suckled farmboys as surely as our grandmother MacMillen once suckled her twins and her deceased sister’s twins. I have since thought a picture of my grandmother’s tits would be a fine family heirloom.

I regularly visit her grave west of Endeavor and swear the ground still swells noticeably over her, perhaps a tree root, perhaps her magnificence.

Grandfather’s library had hymn books, the collected sermons of John Wesley. He had cookbooks, he had books to build a chicken coop, how to blacksmith, steam engine repair and trigonometry, star charts, how to shingle a roof, how to cut shingles.

As a Methodist sort of child, I imagined God was of the same construct as my grandfather. A lean sort, as contrasted to Michelangelo’s version, a clean-shaven god too wore bib-overalls. He too a connoisseur of waters with a library with how-to-do-it books, how to build a chicken or deoxyribonucleic acid. Theologically, I believe god is less important than the library.