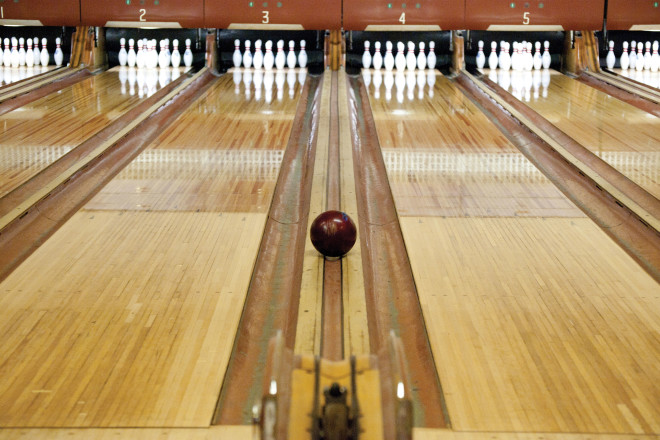 It’s an undeniable fact:  Door County winters are long, quiet, and cold. Most locals start to get busy in the spring, preparing for the summer tourist onslaught, then calm down a bit in the fall before settling in for a long winter. For some people in Door County, however, autumn leaves herald one of the busiest times of the year:  the bowling season. 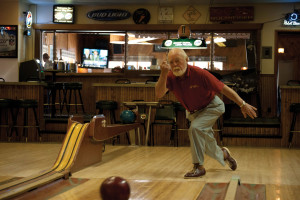 “We have the absolute opposite schedule of the rest of Door County,” says Pat Cuculi, owner of Apple Valley Lanes in Sturgeon Bay, one of four bowling alleys from Sturgeon Bay north. “We’re much more relaxed in the summertime.”

It was the urge to find fun winter activities that first prompted people to open bowling alleys in Door County. When Earl Willems decided in 1957 to replace a dance hall in downtown Sister Bay with a bowling alley, everybody “thought he was nuts,” says Willems’s grandson Mike Daubner. But Willems and his wife, Rita, thought that Sister Bay residents could use an indoor activity during the cold winter months, and so the Sister Bay Bowl was born.

Sister Bay wasn’t the first Door County town to warm up its winters with bowling. Bowling in Northern Door began in 1948, when Karly Jessen decided to put a bowling alley in the basement of Karly’s Bar on Washington Island. Beneath the bar and its adjoining dance hall, Jessen used dynamite to excavate a space for four alleys.

“I suppose he needed the business,” said Jessen’s son Tim, who now owns Karly’s with his wife, Lois.

Like most bowling alleys at the time, Karly’s and the Sister Bay Bowl started out by using “pin boys” to reset the pins after each frame. The Bowl went to an automated pinsetting system the year after the alley opened, but Karly’s did not mechanize its pinsetters until 1988, after 40 years of bowling business. Though pinsetting was desirable work in an economy low on jobs for young people, “hopping alleys” (as pin boys called the responsibility of setting the pins on two alleys at once) was hot and occasionally painful, as pins would fly into the legs of the waiting pin boys.

All Door County bowling alleys now have automatic pinsetting systems (although a few alleys in Milwaukee still use pin boys), but that doesn’t mean they’ve lost their vintage charm. The mechanisms in the Sister Bay Bowl, for example, are the same devices that Earl Willems installed back in the 1950s.

“They were designed so well back in the day that they really haven’t changed that much except for the electronics,” explains Daubner, now the general manager of the Sister Bay Bowl. In northern Door County bowling, Daubner continues, the lack of computerized scoring systems and the presence of above-ground (as opposed to “subway”) ball returns “gives [the alleys] a completely different feel.”

Though all bowling alleys regularly re-sand and re-oil their lanes, the old bowling alleys of Northern Door have managed to keep the original lanes mostly intact. All but two of the Sister Bay Bowl’s lanes are original, and none of the lanes at Karly’s have been replaced – a fact that is especially impressive given that they were 30 years old when they were installed.

For serious bowlers, this kind of vintage technology makes a big difference. The lanes at the Sister Bay Bowl are “score-able,” Daubner explains, “but it’s tough with them being wood. There are a lot of synthetic lanes now.”

Wayne Pinkalla, a champion bowler who now lives in Baileys Harbor, concurs. “Bowling technology [in the US] has increased scores immensely. They make balls differently. They have more action, spin, and carry. Pins are more lively – more likely to fly when they’re hit. That technology lacks up here. The latest equipment could increase bowling scores.”

Door County bowling alleys are gradually updating their equipment. When the Sister Bay Bowl got an automatic alley-oiling machine, scores jumped immediately. But, as a bowler who learned to bowl on old-fashioned equipment, Pinkalla points out that the new technology favored by modern bowling alleys lets younger bowlers get away with a shallower understanding of how the game works.

“Older-time bowlers were more accurate and more students of the game – they could figure out alleys better. New balls and the way 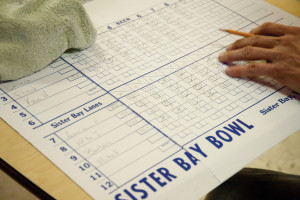 alleys are now oiled and conditioned help bowlers score better, but as soon as they get on a different alley, they can’t do it. Young bowlers and those new balls – it’s like having a tiger by the tail.”

While bowling technology is improving nationwide, interest in the sport has faded since its heyday in the 1950s and ‘60s. In the decades immediately after the Sister Bay Bowl and Karly’s opened their doors to bowlers, league bowling thrived. Teams with names like the C&C Club, Al’s Restaurant, Door Reminder, and Casperson’s Deadbeats kept The Bowl thriving. In the late 1950s, The Bowl was hosting league bowling five nights a week, sometimes with two shifts in an evening.

In the 1980s, though, bowling participation began to drop significantly, in Door County and beyond.

“We’re struggling with leagues,” Cuculi reports, and it’s “a countrywide trend.” A combination of a raised drinking age, indoor smoking bans, fewer young people on the peninsula, and expanded entertainment options are all cited as reasons for the drop in bowling interest in the last few decades.

“Thirty years ago, we entertained ourselves,” Cuculi continues. “Now, with computers and DVDs, there’s a lot more competition than there ever used to be for the entertainment dollar.”

The situation at the Sister Bay Bowl isn’t much better; in recent years, Daubner has shortened the league bowling season from 33 to 25 weeks, and the number of bowlers on each team has dropped from five to four. At Karly’s on Washington Island, there was no league bowling last year – for the first time since the bowling alley opened in 1948.

“The economy on the island is still pretty bad,” Jessen says. “I doubt there will be bowling this year…It’s too bad, because there were some really good bowlers on the island.”

Even though bowling may be suffering now, many people in the Door County bowling community are optimistic about the future of the sport. “Bowling has been around forever, and it’s going to keep going,” says Cuculi.

Here on the peninsula, bowling alleys are far from deserted. During the bowling season, Apple Valley Lanes hosts league bowling seven nights a week and most days. Cherry Lanes in Sturgeon Bay has regular music concerts featuring both local musicians and national touring artists. The Sister Bay Bowl and Apple Valley Lanes still host regular bowling tournaments, and Karly’s used to host tournaments as well. Teams from each of the different alleys regularly attend other Door County tournaments and even travel longer distances to compete elsewhere in the state and country. All the teams maintain a healthy sense of camaraderie and competition.

“Pat Cuculi brought a bunch of guys up to bowl one time,” Jessen remembers of a particular tournament at Karly’s, “and they just cleaned our clocks. We were shooting shotguns and they were shooting cannons.”

Hall of Fame inductee Pinkalla, who at age 78 still averages 200 points per game, says that more and more young bowlers are coming out of the woodwork in recent years. “They’re all eager for instructions,” Pinkalla says. “They ask me to watch them bowl and give them pointers.”

Pinkalla is happy to share his knowledge of the game with young bowlers and wishes there were more formal bowling instruction programs in Northern Door. Due to the peninsula’s geographical spread and the large number of activities available to today’s young people, youth bowling programs are difficult to organize. 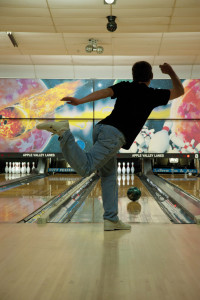 Still, Karly’s hosts a bowling program for Washington Island schoolchildren every other year. In Sturgeon Bay, Apple Valley Lanes has a thriving junior bowling league, hosts bowling classes for Gibraltar, Sevastopol, Sturgeon Bay, and Southern Door students, and also opens the lanes once a week to residents of the Sunshine House.

If the strength of these youth programs is any indication, Door County bowling may soon experience a resurgence of interest. In the coldest season of a climate known for its harshness, bowling alleys offer not only entertainment, but also a sense of community and connection.

As Mike Daubner puts it, “In January and February, when there’s nothing else to do, what’s a better night out than to go out and drink some beers with the boys and bowl?”

Cuculi agrees. “You get to be with your friends in a social atmosphere, and people like to compete a little bit. It’s not blood and guts, but it’s a league. You can see a lot of smiling faces down there.”