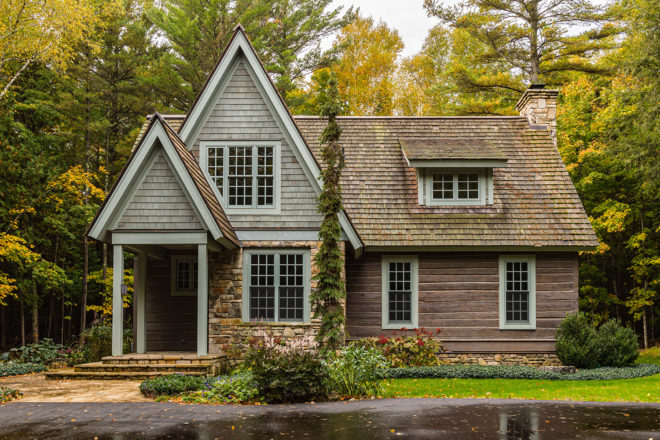 Scott Pearson, and his wife Duska, wanted to go with a Scandinavian design for their home. Photo by Len Villano.

If you were to drive around Door County with Jack Opitz, he would be able to point out 40 or more old log cabins that are left from the days when the Europeans settled here. They wouldn’t look like log cabins to the untrained eye, but Opitz can see them clearly.

“There are several clues that you look for. I can tell you, but I’d probably have to kill you,” he said with a laugh.

Opitz’s expertise in log cabins comes from more than 30 years of on-the-job training. His company, Vanishing Heritage Restorations, locates and buys old log cabins and turns them into new homes — the very definition of recycling. He’s part detective, part preservationist and part builder, and he wouldn’t have it any other way.

What makes it fun for Opitz is the same thing that makes it impossible for most other people to see these cabins: They don’t look like log cabins from the outside. Optiz explained that because the early settlers wanted to fit in, they covered the exterior of their log homes with siding, and often they covered the interior logs as well. So even when Optiz identifies and then buys a cabin, he doesn’t really know what it looks like until he carefully peels off the coverings.

“I think I get more joy from finding the building and taking the exterior siding off and seeing the logs that have been covered for many, many years, and you go, ‘This is going to be a beauty’,” he said.

And, his clients agree, they are things of beauty.

“He’s a true craftsman,” said Scott Pearson, who, with his wife, Duska, wanted to build a traditional Scandinavian-style home. They had admired Opitz’s work, so they got in touch.

Optiz built a home in Ephraim for the Pearsons, using what likely was an old trapper’s cabin from the Upper Peninsula of Michigan as the basis for the home.

“He did a great job of preserving the integrity of that log structure,” Pearson said.

More than that, Pearson said Opitz took great care to add special touches throughout the home that not only complemented the historic logs, but also made it very personal. Optiz hand-cut wood for the banister and used wood from birch trees on the property to make coat hooks in the entryway. He even found a charred log from the 1871 Peshtigo fire that he used for the mantel.

Although Opitz’s career in log homes began in 1987, he traces his interest in them to his childhood.

“It was during the 1960s, and there was a [TV] program Bonanza that had the ponderosa log buildings,” he recalled. “That was my introduction to liking log structures.”

Opitz’s first log project was a personal one. He and his wife, Liz, bought a log building in Kewaunee County and wanted to create a vacation home on land she owned in Ellison Bay, so he dismantled and relocated the cabin. Over the course of several years, he turned it into what would be his first project.

Around that time, Opitz got involved with Alan Pape, who was developing his own community with old log cabins elsewhere in Wisconsin. Pape hired Optiz to dismantle two log structures for him and suggested that Optiz sell cabins as a business. He took that advice, ran a newspaper ad and sold his first two cabins. His new career was born.

So far, Opitz has built 20 new homes and other structures in Door County from old log cabins, and he’s restored about 15 existing log cabins here. It’s safe to say his work is about quality, not quantity. Dismantling cabins in order to relocate and rebuild them takes tremendous time and skill. He starts at the top and works his way down, carefully numbering and documenting pieces as he goes. He measures every log and every window and door opening so that he has a detailed drawing of the original cabin.

“That’s one of my strong points,” he said. “I do like the details. The art and craftsmanship are in the details, and that’s what I enjoy.”

That’s true of Opitz’s own work and that of the early settlers.

“I’m still in awe of their craftsmanship and how they were able to make such beautiful, perfect, hand-hewn buildings.”

“He’s a stickler for detail, which is important when you’re doing high-end work,” said Jim Schaefer, a Mequon architect who has worked with Opitz on several projects.

One was a house on Sand Bay Lane that Sister Bay native Matthew Shumway owns.

“That was one of my favorite houses,” Schaefer said.

The Sand Bay house includes two old Finnish log cabins that Optiz bought — one from the Upper Peninsula and one from Minnesota. Schaefer’s plan joined the two cabins and added some stick-built (non-log) areas to create a 2,800-square-foot, two-story home.

One of the things that makes Shumway’s home — and all of the structures that Opitz creates — so special is that in each project, he uses the log cabin in its total, original form. That’s also what creates some challenges.

Typically, one of the biggest challenges is deciding how to deal with window and door openings from the original cabin that are in places where you don’t need or want windows and doors in the new home.

“You have to be creative,” Opitz said.

In Shumway’s house, a new fireplace ended up covering two original window openings on one side of the wall. On the other side, Optiz turned the openings into bookcases.

Shumway said he loves the combination of old and new in the house: the benefits of modern construction with the aesthetic of the log cabin. He said it all comes together beautifully in the living room.

“There’s a floor-to-ceiling fireplace. It’s incredibly striking,” Shumway said. “When you combine that stone fireplace with the log cabin interior around it, you’re just drawn into the room. It’s cool to know it’s part of history.”

History is a big part of the draw for Optiz, too. He has a keen appreciation for the early settlers’ craftsmanship and is a human encyclopedia who knows everything from settlement patterns across the area, to early building tools and techniques, to the different wood types and log thicknesses that each ethnic group used.

Opitz has uncovered many treasures along the way, including old coins, old leather shoes and a Finnish axe. As he was dismantling one cabin, he found a tax bill dated 1898 that documented its purchase.

“I think the part I’m most proud of is being able to save these buildings and give them new life,” Opitz said.

If the walls in his homes could talk, they would have two stories to tell: one old, one new.

“Some of the best memories I have in life are from that house,” Pearson said of his home.

For Opitz’s clients, home means living in history while creating their own.