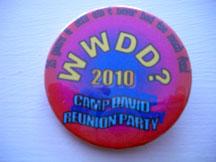 “What Would David Do?” buttons were passed around the reunion.

Images from a three-day extended family reunion in Fish Creek.

• Too many attendees (with spouses and kids) to count, because…

• The sight of Tony Galliano, one of Camp David’s first residents, defending the pig by hanging onto the tarp that covered the roaster;

• Deborah Fett, who lived at Camp David years ago as a member of Heritage Ensemble and American Folklore Theatre, sharing family photos with dozens of old friends and enjoying the “family portraits” from each year hung in the dairy barn

• An all-night jam session featuring The Nicks (Hoover and Steingart) that ended at 5 am Sunday;

• Rides all over the “back 40” of Doug Fitzgerald’s adjoining farm in a fancy Polish-made wagon pulled by French draft horses owned by Paul and Leslie Leline; and

• Distinctive 25th anniversary souvenirs – buttons created by current campers Corrine Keehan (the Camp David record holder with nine years!) and Mackenzie Smith, bearing the initials WWDD, representing the query of 25 years of campers in puzzling situations, What Would Dave Do?