It’s a short distance across the stony causeway to the Cana Island Lighthouse, but a memorable journey in time.

“You are walking across the bottom of Lake Michigan,” said Trudy Herbst, development director for the Door County Maritime Museum (DCMM).

During times of low water level, the stones make a dry path to this lighthouse that has been listed on the National Register of Historic Places since 1975, but during years of high water, visitors to the island have waded. 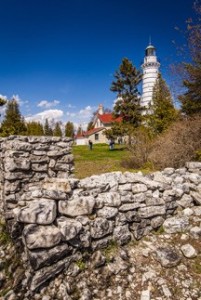 Either way, Herbst says the anticipation builds as you walk onto the tree-lined island path, through the woods, and then you see the lighthouse.

The Cana Island Lighthouse, just off County Q near Baileys Harbor, is the most picturesque on the Great Lakes, asserts DCMM Executive Director Bob Desh. He calls it an iconic and unique traditional lighthouse.

While the peninsula boasts 11 lighthouses, this is the only coastal light, with an 89-foot tower that dwarves the rest. Other lighthouses are situated on bluffs that make their beacons visible to ships; Cana Island depends on the height of the building.

“America’s castles are our lighthouses,” Herbst said. “When this one was built, it was the tallest structure in Door County.”

And this one, “on the shore of big water,” Desh said, “is a photographer’s dream.” During the 1920s stone walls were built on the island’s perimeter with arched gates opening to vistas.

“No other Great Lakes lighthouse has that cultural landscape,” Herbst added.

Built of the famous and usually resilient cream city brick of Milwaukee, the tower was encased in steel plating in 1902, only 33 years after being built. Some say it was the fierce Lake Michigan weather converging on Cana Island that caused the speedy deterioration of the brick, and some say it was simply inferior brick. Yet the 1½-story lightkeeper’s house was also made of cream city brick and retains its original brick exterior.

The Cana Island Lighthouse dates from 1869. Desh pointed out that many lighthouse keepers were Civil War veterans who had recently ended their service when they were given preferential consideration.

Now the Cana Island facility is celebrated as Wisconsin’s oldest original and still operating lighthouse as it continues to use the third order Fresnel lens installed when it was built (Fresnel lenses came in seven “orders” or sizes, with one being the largest and seven the smallest).

Because the Cana Island Lighthouse is a symbol of Door County’s maritime heritage, the DCMM, in a partnership with Door County Parks, has embarked on a major preservation project, “Illuminating Our Heritage.” The museum serves as operations manager and preservation partner, while the property is a part of the Door County park system.

The relationship between the Cana Island Light Station and the Door County Maritime Museum dates back to 1970 when the U.S. Coast Guard issued a lease to DCMM, making it the station’s “keeper.” In 2006 the U.S. Coast Guard designated the property as “excess to federal needs” and the Bureau of Land Management transferred island and lighthouse to the county.

The lighthouse still functions but the keeper’s quarters and tower are no longer necessary. A beacon could easily be mounted on a metal tower, as are modern signal lights.

But once upon a time maintaining a lighthouse was labor intensive. The original light was fueled by rendered animal fat, later replaced by whale oil, before the advent of other fuels and electricity.

An early lighthouse keeper lived in the quarters with his family. Many times he would request that his wife be hired as assistant. While he would not have the help of a second man, he would be compensated with a larger family income and be provided more living space.

The work was intense and unyielding, Desh pointed out, “A dairy farmer could understand the demands. A mistress that must be tended, no vacations, no days off.” The keeper was “absolutely in control of the light” which had to appear at least one-half hour before sunset and remain lit until at least one-half hour after sunrise. Throughout the night the keeper continually checked on the light to refill the lamp if necessary.

Because of the exposed position of Cana Island, the keeper experienced storms firsthand, including the Alpena Gale in 1880. November is the season of the most severe lake storms. Keeper William Sanderson wrote in a log that the water was 10 feet above its normal level and 50 feet back from the shore. He and his family had to flee inland; his unfortunate chickens perished in the flood.

Sanderson’s son Clifford was keeper in 1928 when the 352-foot steamer Michael J. Bartelme ran aground on a shoal west of the lighthouse. Sightseers drove out to the island, as many as 200 at a time, creating a parking problem, ironically one that persisted after the lighthouse became a tourist attraction, until the creation of a parking lot this summer.

In 1919 the Frank O’Connor, at the time one of the largest freighters on the Great Lakes, sank two miles out from the lighthouse, not from a storm but rather a fire on board. The keeper rescued sailors with his boat. Now the wreck is a dive attraction marked by a buoy.

The Cana Island lighthouse has fared far better over time than have some of the ships seeking shelter during storms. “Because it has been occupied most of its life,” Herbst said, “it is in relatively good condition,” which is not the case with many lighthouses.

At the end of World War II, the residence was leased as a summer home until 1970 when control of the lighthouse was given to the DCMM. From 1977 to 1995, Louis and Rose Janda and their family served as summer caretakers of and tour guides for the property.

The restoration project began with a comprehensive Historic Structures Report in 2009, a detailed analysis of the condition of the five buildings on the property and recommendations for their preservation.

“The mission of the museum,” Desh said, “is to preserve and celebrate, to strike a middle ground where you can see it, but not play with it.”

However, as visitors to the lighthouse climb the 97 steps of the spiral staircase to the watch deck, step out onto the gallery, and gaze off to the bays at either side and to the waters of Lake Michigan in the distance, they can easily imagine the life of an early keeper.

The Cana Island Lighthouse opens for tours every day May through October, 10 am – 5 pm. For complete information about the lighthouse and its history visit dcmm.org, lighthousefriends.com, and baileysharbor.com.