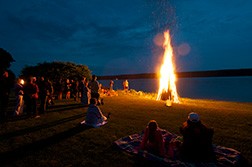 The bonfire containing the winter witch.

June is a special time of year, particularly in Door County and, most particularly, in the Village of Ephraim where the annual Fyr Bal festival (pronounced fear ball) is held. If there is one community for which Door County is most recognized it is Ephraim, with its panoramic beauty wrapping around and above the shores of Eagle Harbor.

Thus, it seems appropriate that Ephraim hosts the peninsula’s most unique festival.

Like virtually all festivals on the peninsula, Fyr Bal is a weekend-long celebration that includes arts and crafts, plenty of food and refreshments, and musical entertainment. Ephraim’s festival also includes Scandinavian dancers, a featured attraction that hints at Fyr Bal’s most unique element: the bonfires.

Fyr Bal, or “fire festival,” has precedents that stretch back through recorded history. Yet, for many, the festival, and its significance, remains obscure. Scottish scholar, Sir James G. Frazer (1854 – 1941), in his seminal work The Golden Bough: The Roots of Religion and Folklore, links the tradition of fire festivals to the Norse myth of the god Balder’s death and the subsequent burning of his body (along with his wife Nanna, who died of grief, and his horse) on his ship, Ringhorn. Frazer notes:

“The main incidents in the myth of Balder’s death are two: first the pulling of the mistletoe and second, the death and burning of the god. Now both these incidents appear to have formed parts of an annual ceremony once observed by Celts and Norsemen, probably also by Germans and Slavs.”

Fire Festivals, celebrating a variety of occasions, were (and still are, to some degree) widespread in Europe and Scandinavia. As Frazer notes, “But the season at which these fire-festivals are most generally held all over Europe is the summer solstice, this is, Midsummer Eve (June 23rd) or Midsummer Day (June 24th).” This is the tradition that Ephraim’s Fyr Bal is modeled after in the present day.

The earliest recorded examples of this type of fire festival were affiliated with pagan religions. The Druids of Ireland, Wales, and parts of England, for instance, held ceremonies wherein humans were burned alive in bonfires. In this case, the belief was that death was a means of purification. The ashes from the fire were gathered and spread in the fields the following day, thereby protecting the crops from “evil” and ensuring a good harvest.

Early examples from Scandinavia were closely linked with the warrior spirit of the Vikings and Saxons (hence Frazer’s link to the myth of Balder’s death). Records indicate that the Scandinavians, being a seafaring people, held their version of a fire festival in conjunction with a thawing of the fjords and the beginning of a new sailing season. In this case, either actual enemies of the local populace, or effigies representing their enemies, were burned in the fires. As in the Druid festivals the ashes were gathered and scattered either in the fields or around the outskirts of the village, thereby protecting the local populace from invasion.

With the spread of Christianity the fire festivals drew away from their pagan links and became affiliated instead with the new religion – most often the celebration of Easter, though Midsummer or St. John’s Day celebrations were (are) common. Since the new religion did not condone human sacrifice, the use of effigies increased, though animals (notably wolves or foxes, whose bodies witches could supposedly assume at will) were substituted in some areas.

The significance of the effigies altered at this time, as well. Usually they were symbolic of all the evil that had befallen the community in the previous year. In some cases, the effigy even underwent a trial for his/her “crimes” before being ultimately sentenced to death by burning.

In other cases, the effigy became symbolic of winter and its burning signified the beginning of another growing season. Names for the effigy varied, depending on the region, but the most common names were “witch,” “old wife,” or “winter’s grandmother.” 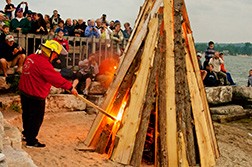 Frequently, the bonfires consisted of burning an entire tree, with the effigy tethered to the topmost branches. In other cases, they were attached to a long pole that was stuck into the center of a woodpile. In every case, the ashes were collected and distributed in the fields.

Ephraim’s version of the fire festival is a combination of a variety of these characteristics, with the addition of a few local modifications.

There will also be demonstrations of traditional Scandinavian craft, including wooden shoe carving in the park gazebo.

A wooden Viking boat, purchased from the Sons of Norway by the Sister Bay Marina, is back on loan for the festival this year.

The crowning of the Village Chieftain in Ephraim is a good example of the combination of the historical and local. Traditionally, the conductor of the festival, or the “festival chieftain,” was the man who last married in the community. It was his duty to direct the ceremonies and to light the bonfire containing the effigy. Throughout the rest of the year he received special honor from fellow villagers.

Fyr Bal’s chieftain is selected by a vote of the village residents and honors those men and women who have worked over a long period to improve the community. Like their early forerunners, the Fyr Bal chieftains carry their title throughout the year until a new chieftain is chosen.

Fyr Bal’s effigy is the “winter witch” and her “death” symbolizes the beginning of the summer tourist season in Door County. And, as in traditional fire festivals, it is the Fyr Bal Chieftain who lights the bonfire containing the winter witch.

Ephraim’s unique touch is the multitude of bonfires. While the main bonfire on the waterfront near the village hall is the center of activities, many of the businesses and shore front property owners build their own bonfires along the shore. When the central bonfire is lit it signals the lighting of all the bonfires, thereby ringing the harbor with light. 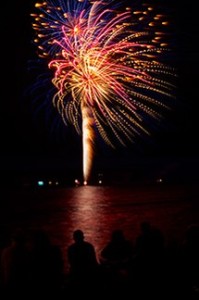 Fireworks signify the end of another Fyr Bal in Ephraim.

And yet, amid all this discussion about history and tradition, it is the beauty of the actual event that so resonates with those who attend. The main bonfire, with its smaller satellite bonfires stretching out to either side along the shores of Eagle Harbor, remains one of Door County’s most lovely sights. That beauty is the most striking and lasting aspect of one of Door County’s most treasured traditions.