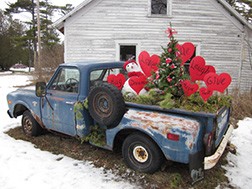 Anyone who has lived in Door County for even a little while has surely heard of the late Gust Klenke. Though he’s been gone since 1982, the memories abide.

Norb Blei, that great chronicler of authentic Door County characters, described him as, “A quiet man in tune with his work, equally at peace in the fields buzzing in sweet white clover [he was a beekeeper], or hunched over the disharmony of a small engine misfiring in the darkness of his garage. A man of few words. Silence . . . then a long, drawn out, ‘Yeeeeep.’”

Gust was a fiddler, too, until someone from a local church appeared at a get-together at the old Ellison Bay Schoolhouse and said a fiddling man was the work of the devil. Gust hung his fiddle above the cash register in the garage and never played again.

If, by chance, there are those who have not heard tales about Gust, they must at least have driven north of Ellison Bay on Hwy. 42 and noticed an old blue pickup parked beside an even older building with a sign identifying it as “Gus” Klenke Garage (no explanation for the spelling. The name on his tombstone in the Liberty Grove/Ellison Bay Cemetery is Gustan Klenke, but it’s a good bet that few people knew that).

“Inside and out,” Blei said, “Gust Klenke’s Garage is a landmark in Ellison Bay.”

In his 1981 book, Door Way, Blei said, “The place may be an eyesore to some. But I can no more imagine Ellison Bay without Gust and his corner garage than Ephraim without the purity of its white buildings and church steeples, or Sister Bay without Al Johnson’s. When Gust and his garage go, replaced by self-service pumps with digital numbers (or merely leveled for yet another unneeded gift shop) much of the soul of Ellison Bay will disappear.”

Blei left us, too, a little more than two years ago, but he must have been pleased to know that his prophecy about Gust’s garage had not come true. The garage is still there and for many years, that old Chevy pickup has been parked beside it, its bed filled with frequently changed, fanciful displays, the origin of which has been a mystery to passersby.

The Ellison Bay Historical Society was founded in 1999, and one of its early projects was the renovation of Gust’s garage with a new roof, siding and paint. In 2000, Gary and Marcy Farber retired in Ellison Bay. When Marcy’s stepfather passed away, Gary inherited his pickup. He drove it until it wouldn’t run anymore, then donated it to the historical society. 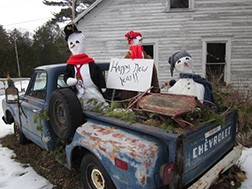 Appropriately, it came to rest beside the garage, where in Gust’s day, “there was a graveyard of old automobiles and trucks, even a yellow school bus, swaying in the weeds.”

One summer about 10 years ago, Marcy “innocently” planted some geraniums in the truck bed. She didn’t know what she’d started.

“I sometimes forgot to water them,” she says, “so I ended up replacing them with artificial flowers. One thing gradually led to another. Fall came and I replaced the flowers with pumpkins. Then it was Christmas…”

“When I found a fake turkey, we started doing Thanksgiving,” Marcy says. “I made snowmen out of old sheets for winter. The tree decorated with Valentines was popular, and one year I made and decorated big eggs for Easter.”

Another chilly spring when it snowed, Marcy shaped ears on the snowmen in the truck, turning them into bunnies.

“When Carol Lango was president of the Ellison Bay Service Club, they started planting flowers in barrels around town. Now Gary and I get flowers to plant in the pickup from them, and the club, whose president is now Michelle Kemp, looks after them in the summer. I get June through September off! I sort of have to wait for the flowers to die so the fall pumpkin display can go in.”

Marcy tries to do different things each year, especially for Christmas. The 2013 display featured a stick tree, painted white and covered with glitter. Last year, she used a live tree. One memorable year, friends visiting during New Year’s helped the Farbers take down the Christmas display so winter could be installed.

“Santa was frozen fast in his rocking chair,” Marcy laughs. “You should have seen four 70-somethings trying to wrestle Santa and his chair out of that truck!” 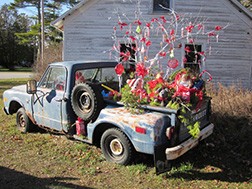 The old truck in Ellison Bay, considered a landmark by many. Submitted photo.

As intriguing as the displays are, very few of them have been disturbed.

“We lost a little pink bunny three years ago at Christmas,” Marcy says, “and a big blue bunny this year at Easter. I hope some children are enjoying them. One Halloween, a very distressed friend came to tell me that someone had stolen the heads of Dorothy and the Tin Man from the Wizard of Oz display. Fortunately, they were made of fake pumpkins, and I had more. I shop at Bargains Unlimited for toy bunnies and teddy bears.”

Marcy once received a picture of a wedding party, taken in front of the Wizard of Oz display. And the fame of the decorated pickup has spread far beyond Door County.

When Marcy was visiting in Cedarburg, her friend took her to see a woman who does fine needlework and takes classes at Sievers School of Fiber Arts on Washington Island. When she learned that Marcy was from Ellison Bay, she exclaimed, “Oh, I always know I’m in Ellison Bay when I see the truck. It’s like a landmark!”

Just like Gust’s garage was for so many years.