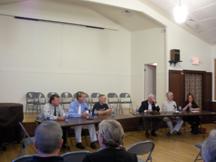 Last night I was in the audience of an Ephraim Historical Foundation “History Speaks” program on “The Changing Face of Media in Door County.” Many of the county’s familiar faces took part in this panel discussion, including the Pulse’s Dave Eliot, FM 106.9 The Lodge’s Mike Mesic, WDOR’s Eddy Allen, 3W Design’s Barb Luhring, former Advocate reporter Joe Knappen, and WBDK owner Roger Utnehmer.

It was, to say the least, an interesting discussion. There are a lot of changes afoot in the world of newspapers, radio, internet, and other media outlets – and Door County is no exception. But the bottom line of the discussion, no matter what part of the media world these professionals were from, was that our media outlets are ultimately here to serve our communities.

As members of these companies (as well as these communities!), we need to be constantly listening to the needs of the community that we’re reporting about. It was great to so many of our local media organizations represented – and even greater to know that a vast majority of them – including the Pulse – are locally owned and operated, which is not something many small communities can boast.