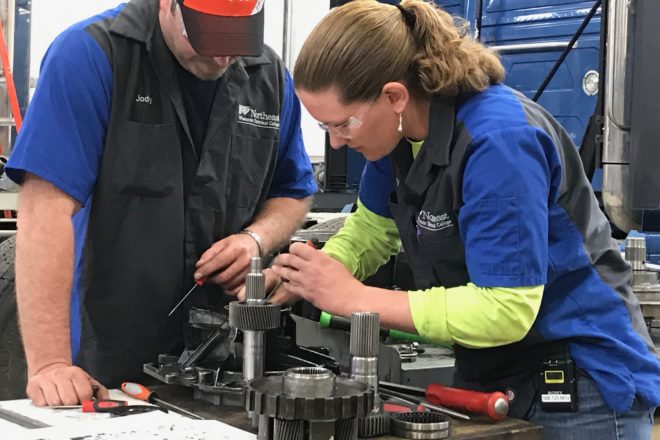 There are many stereotypes about attending postsecondary institutions: that you won’t get a good job or make good money if you don’t go to a four-year university or college, and that tech schools are only for boys and high school slackers. For years, many students have absorbed the idea that a four-year university is always the best option.

An infographic by Degree Query showed that 30 percent of students go to a four-year college because they think it’s the natural next step to take, and 23 percent go only because it’s expected of them.

“It’s true that many of us were brought up with the notion that going to a four-year college was the best and the only path to really getting that ‘good job,’” said Northeastern Wisconsin Technical College (NWTC) President Jeffrey Rafn.

But such ideas are changing.

It’s been only a few years since NWTC began placing career coaches in local high schools to help students understand what their options are – and not just for a two-year program. They’re also working on informing parents about other educational and occupational choices.

“It’s becoming clearer and clearer to high school students that you cannot really get a family-sustaining wage without having gone back and gotten some postsecondary education,” Rafn said.

Jennifer O’Handley, a counselor for grades 10 through 12 at Sturgeon Bay High School, highlighted a few of the ways in which the school informs students about their options.

In accordance with the Wisconsin Department of Public Instruction, the school pulls students in sixth through 12th grade out of class for academic and career planning: a required program that was implemented last fall, O’Handley said.

Students also have homeroom classes twice a month during which they dedicate time to a curriculum the school is developing based on the career-planning needs they’re seeing.

O’Handley is a big supporter of My Education My Way, a presentation by NWTC, UW-Green Bay and St. Norbert College in which representatives from those institutions explain the differences among the types of schools. Sturgeon Bay High School presents the program every year for sophomores.

Financial preparation – and education about it – are also important to O’Handley. In an age when the cost of a four-year university has gone up dramatically, it’s important for parents and students to start planning early and to ensure that they are aware of the most cost-effective options.

Most NWTC students are first-generation college students, Rafn said, so it can be daunting for them (and their parents) to navigate school and financial-aid applications. That’s why NWTC spends a lot of time helping students through those processes.

First-generation college students who choose four-year universities are sometimes there because their parents believe it will give them better life options than the parents were able to have, O’Handley said, but there’s a flip side.

“I went to a four-year college and had to get my master’s degree for my job,” she said, “and I walked away – and my husband is the same way – we both walked away with a boatload of student-loan debt.”

She knows there’s no question about whether her own children need to continue their education after high school, but she wants them to do so in a way that won’t put them in debt.

“Parents want their kids to have a good career and be able to sustain their family,” Rafn said, “so I think they’re seeing the changes that are going on in the workplace around them – the increasing amount of automation, the increasing education that they’re actually having to have even as they’re working.”

The ability to transfer credits to a four-year university is also an attractive aspect of technical colleges. If a student is thinking about finishing a degree at a four-year school, starting the educational process at a two-year school significantly reduces costs.

“I feel pretty confident that 20 years ago, there weren’t all of the [transfer] agreements in place [that there are] now,” O’Handley said.

Knowing that students have the option to attend both types of schools down the road makes it easier for them to consider all options. In the past, it was either one or the other, Rafn said.

There are conversations in the state legislature to encourage universities – and perhaps even require them – to make that credit-transfer process more seamless, Rafn said.

As for the gender stereotype surrounding technical colleges, it’s not true at NWTC: Of the students enrolled at NWTC last year, 56.7 percent were female, and 43.3 percent were male.

“It has to do with occupations that tend to be more attractive to one gender or another – probably more for cultural reasons than anything having to do with ability,” Rafn said.

For example, the nursing and health-sciences fields are very popular at NWTC, and there’s a partnership with all Door County schools and NWTC at the hospital that provides a certified nursing assistant (CNA) class specifically for high school students. It allows them to realize that they can earn an associate degree in nursing rather than a bachelor’s.

NWTC is beginning to see more men entering those professions, and the college even has some male instructors, which means they have master’s degrees in nursing, Rafn said.

Trades and engineering are still predominantly male, but Rafn is seeing more women pursue vocations such as welding and electrical distribution – and the college just hired its first female welding instructor.

“You’re starting to see that breakdown a little bit of the traditional male-female,” he said.

The postsecondary-education decision is not so much of a one’s-better-than-the-other argument, Rafn said. People are recognizing that you can attend either type of school and have good opportunities down the road.

Changing perceptions is still a work in progress, O’Handley said. People don’t hear things until they’re ready to hear them, even as often as schools outline the different options. But, now that a wave of parents sending their kids on to postsecondary education is in debt, those parents may define “better” for their kids in different and evolving ways.