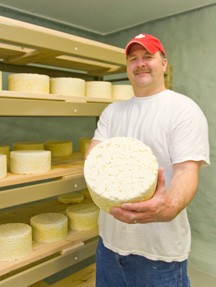 Chris Roelli, a forth generation cheesemaker from Schullsburg, WI, is one of the rising stars in the world of artisan cheese. OK, do you know where Schullsburg is? It is just south of Darlington, in the southwest corner of the state. If you were to drive between Monroe, WI, and Dubuque, IA, you would go right through it, via Highway 11. Schullsburg was a lead mining town that in its day was one of the most prosperous towns in Wisconsin. The area today is dominated by dairy farms, rich cropland, and a few cheese plants.

Roelli’s great grandfather, Adolph, emigrated from Switzerland to this area in the early 1900s, settling near the small hamlet of Gratiot, five miles east of Schullsburg. Times were very hard back in Switzerland during that period, and he heard that there were opportunities for young men here in America, especially in farming. Adolph farmed for a few years, but soon discovered that he really wanted to make cheese, especially since he had become an apprentice cheesemaker as young man in Switzerland. He worked at the co-op cheese plant, and after a few years bought out the other partners. The cheese plant where Chris works his magic today is in the very same building.

Chris’s grandfather and father both followed in Adolph’s footsteps while raising their families in the apartment above the cheese plant.

As a young man Chris worked along side his dad learning the art of making cheese, mostly curds and cheddar. In the late ‘80s, just as Chris was finishing high school, the small cheesemakers in Wisconsin were being squeezed out of business by large commodity cheese plants. The small guy could not compete with companies that were producing thousands of pounds of cheese on a daily basis. Chris’s family decided to close the plant during this period, selling off all the cheesemaking equipment.

Chris went off to a small business school and then tried his hand in a few different ventures, but nothing really clicked for him. He could not get the desire to make cheese out of his mind and heart. Nearly fifteen years after the Roelli Cheese Factory was closed Chris talked his dad and uncle into helping him “re-open” the plant. They said they would help him get started, but did not want to spend the money necessary to re-equip the original cheese plant. Chris had an option for them – a local dairy equipment company in Darlington had built a “cheese plant on wheels” that they would rent to cheesemakers. The trailer is a fully equipped USDA approved cheese making plant, complete with everything a cheesemaker would need to ply his or her trade. The Roelli family had the mobile cheese plant delivered in late 2005, and bingo, within a few days they were back in the cheese business. In the “re-birth” of Roelli Cheese Haus they made mostly cheese curds until a year later they decided to re-build the hundred-year-old family cheese plant.

The “artisan cheese” movement in America was beginning to take hold in 2007, and Chris had a dream to make some original cheeses that would fit in that category. In late 2008 the first batches of his Dunbarton Blue was produced. By the spring of the next year the cheese was ready to be introduced to the consumer market. It was a huge success right from the beginning. Cheese shops from across the country wanted to carry this true American original in their shops. Dunbarton Blue is English-style cheddar, with just a hint of blue added for a rich, almost spicy flavor. The cheese is open cured on pine boards in a cave for anywhere from six to nine months. In 2010 we introduced Dunbarton Blue in our cheese shop, and it became an instant success. Even today this unique cheese is one of our top sellers.

Michael C. Thomas is co-owner of Schoolhouse Artisan Cheese with his wife Janice. With locations in Ellison Bay and Egg Harbor, they aim to bring the best of Wisconsin artisan cheeses to Door County, and with “The Cheese Insider” Michael hopes to bring all things cheese to readers of the Pulse.